Barack Obama has had an amazing politcal ride and being a web designer, I thought it would be interesting to take stock of how his online presence has evolved as he has from a hopeful junior senator to our new president—with screenshots of course.

This is a quick overview of Obama's official online presence. (I know there were many more Web sites and services used but this is just a quick recap of the main sites.) Most of these screenshots and links are from the Wayback Machine so some images in the screenshots are missing. I'll happily update them if anyone has any screenshots of their own. Let me know if you do. 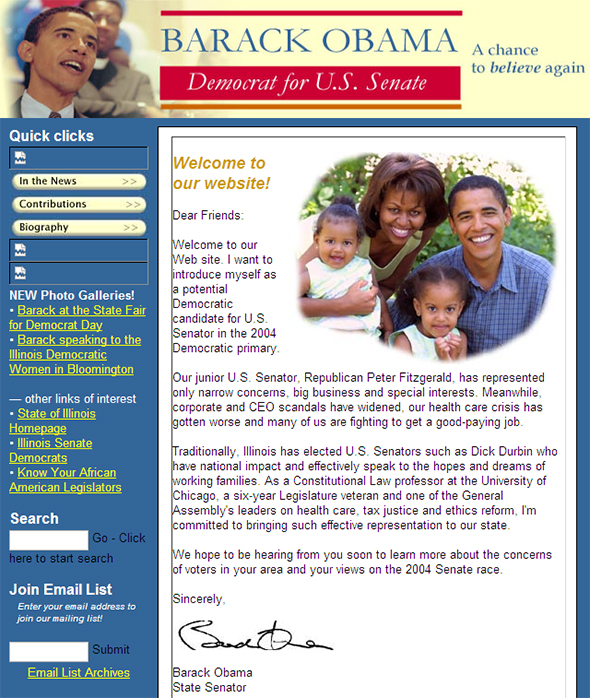 Obama for Illinois (version 1): Created in early 2003 for Obama's senate run. Some navigation images are missing. 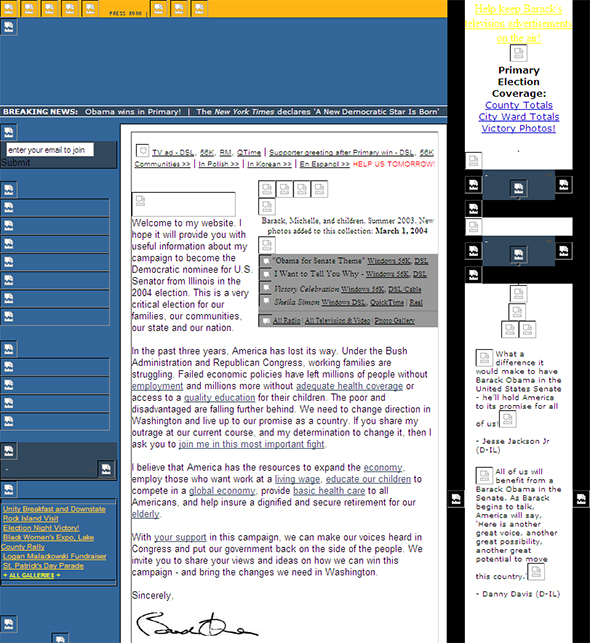 Obama for Illinois (version 2): Obama's senate campign site was updated about a year after the inital launch to include more information and video links on the home page (this was before the YouTube era). Many images are missing from the archive unfortunately. 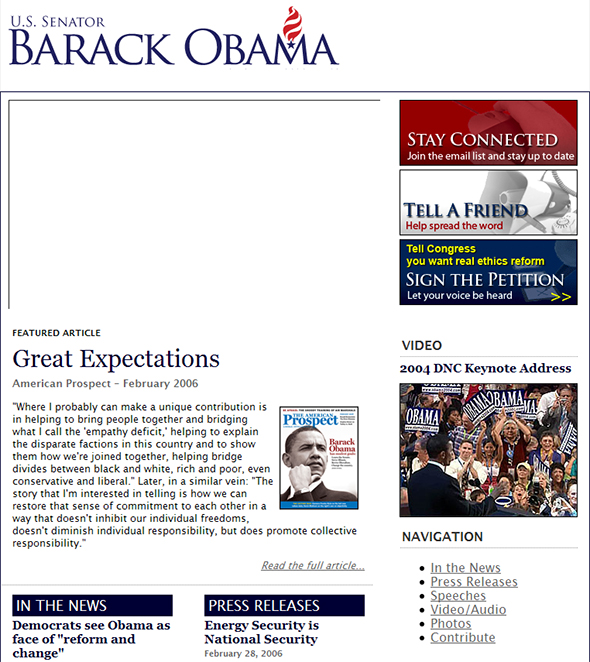 U.S. Senator Barack Obama: Obama's 2006 redesign after his election to the senate. The design starts gearing up for another run in 2010 with a new personal logo and some foreshadowing of later designs. A Flash file was originaly displayed in the large white space at the top and wasn't available from the Wayback Machine. 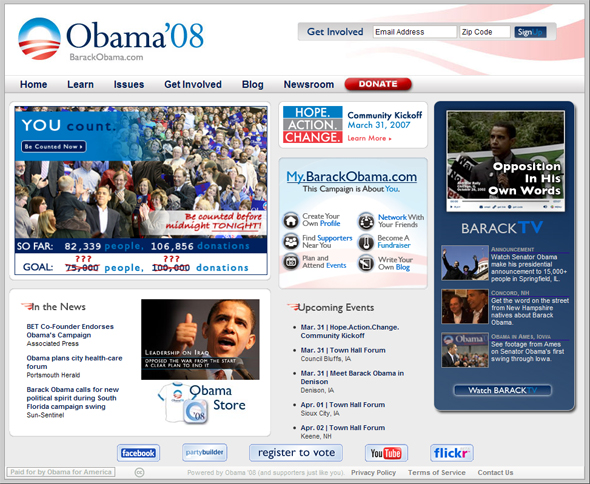 Obama '08 (version 1): The first version of Obama's presidential campaign site launched in early 2007. The highly successful "O" mark is makes its debut (Watch the interview with Sol Sender on the Obama logo) and there's a clear focus on the voters and online communities. The organization was clean but quite busy and didn't stand out much in comparison to other candidates' sites. 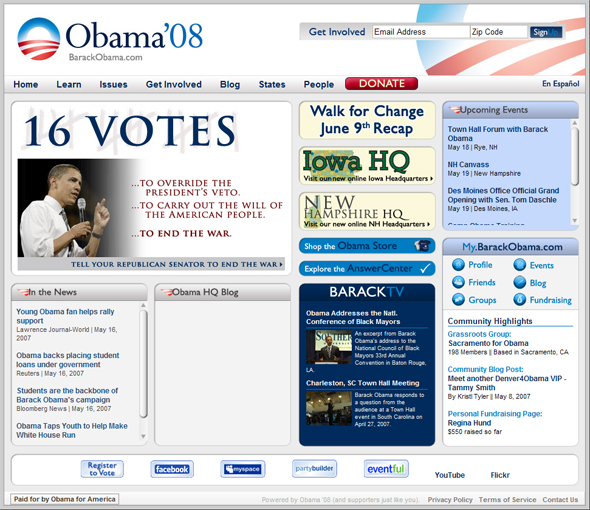 Obama '08 (version 2): Just a few months after the site was launched, a slightly new version was launched that featured much more information on the home page, drawing criticism from some about the site's decline in design. 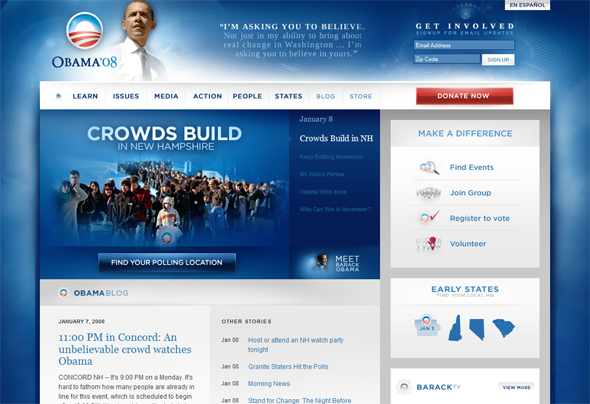 Change we can believe in: The Obama campaign rang 2008 with a brand new site, campaign slogan, and a new drive toward involving the voters. This new design gained high praise from many for its attention to detail and its ability to stand head and shoulders above the other candidates' sites.

Side note: I had the honor of working on this site's CSS and provided some accessibility advice early on. Others from Webitects—Matt E., Derek E., and Matt S.— helped with programming on the home page, store, and other parts of the site. Kudos on a job well done, guys. 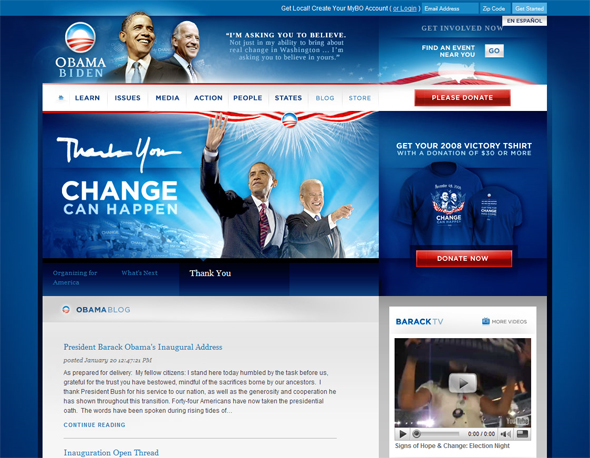 Obama/Biden: Shortly before the Democratic National Convention, Obama announced Joe Biden as his running mate and the earlier redesign was adjusted to include his picture and refined graphics. The screenshot is of the campaign site that has remained the same since Obama won the election. 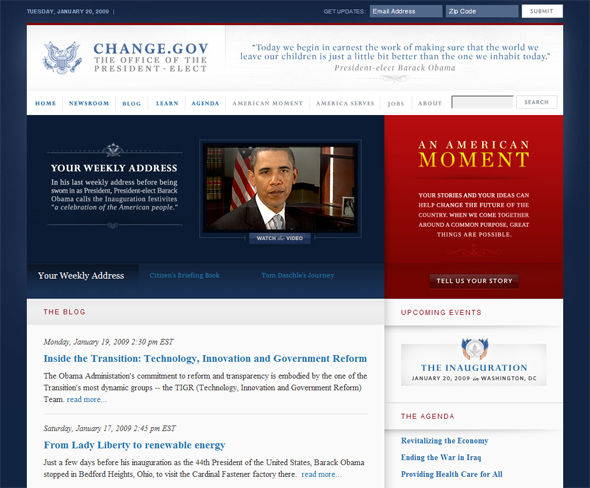 Change.gov: The day after Obama's election night speech in Chicago, Change.gov launched as a way to keep the public informed of his transition from senator to President. It's design was similar to his campaign site but had a more authoritative feel to it. 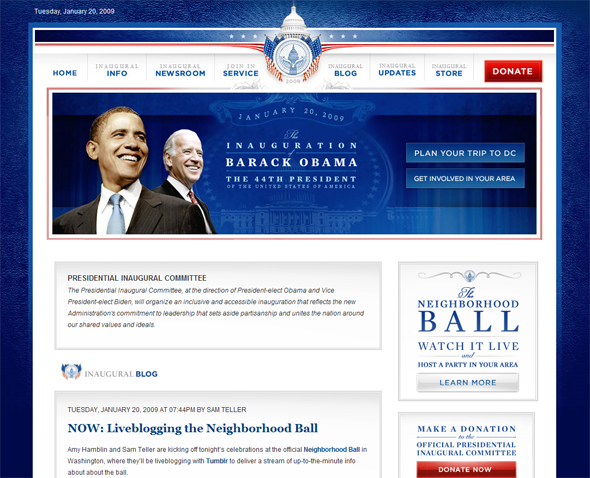 Inauguration fever: Shortly after Change.gov was launched, a site dedicated to the inauguration in January was launched to give the public a one-stop-shop for info on what would be involved. 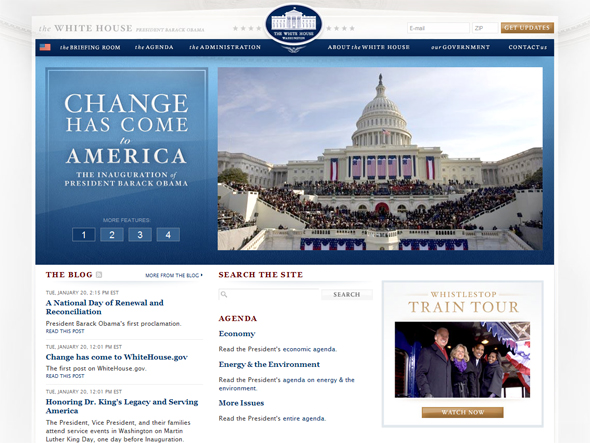 The new White House: Minutes after Obama was sworn in, the new White House site was launched with a refreshed design in a similar style to the other sites featuring several improved features from the previous version. The new site is still in its infancy but will likely grow leaps and bounds with Obama's presidency in an effort to embrace its three priorities: communication, transparency, and participation. 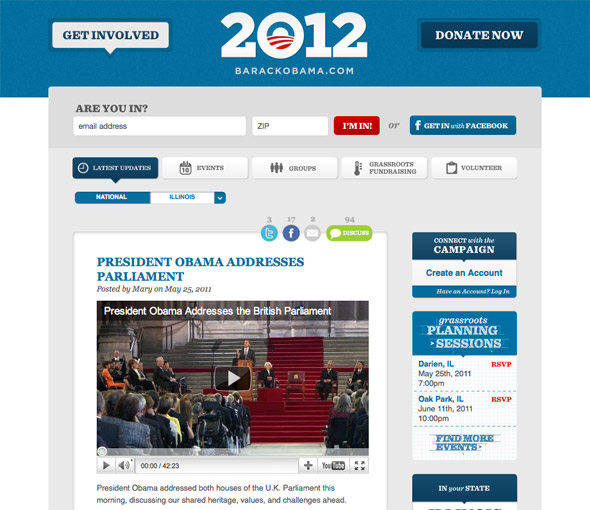 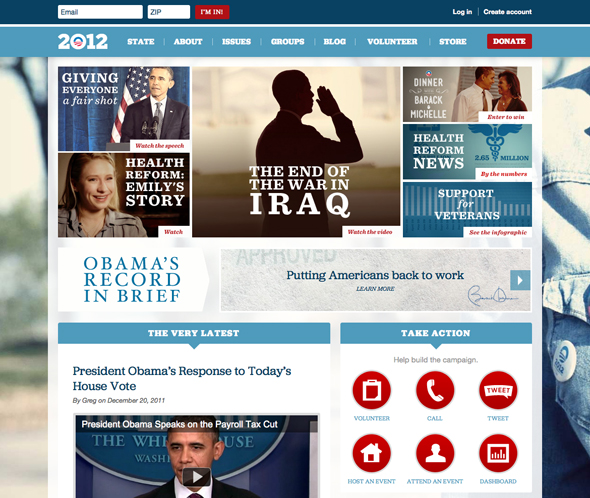 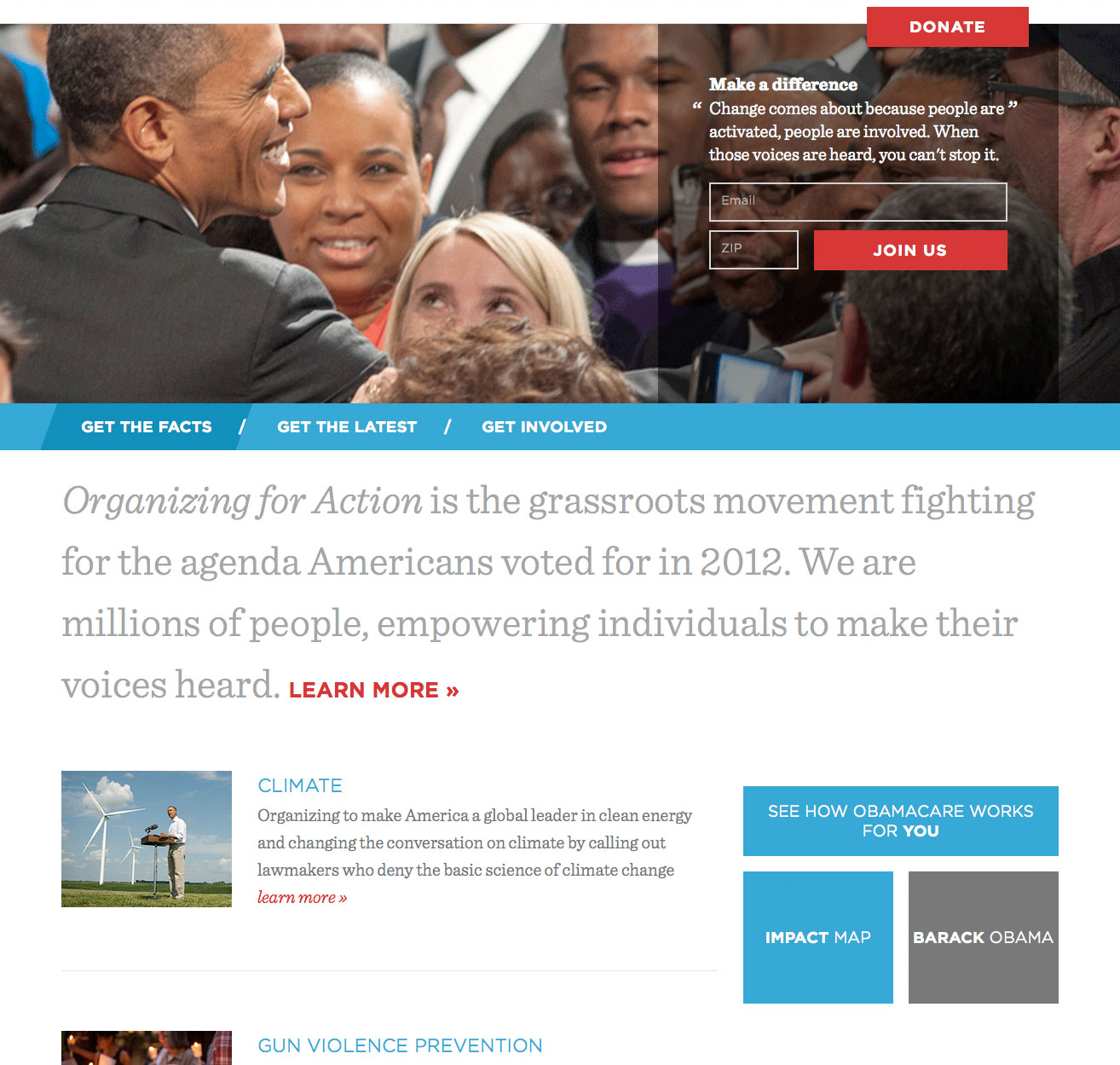 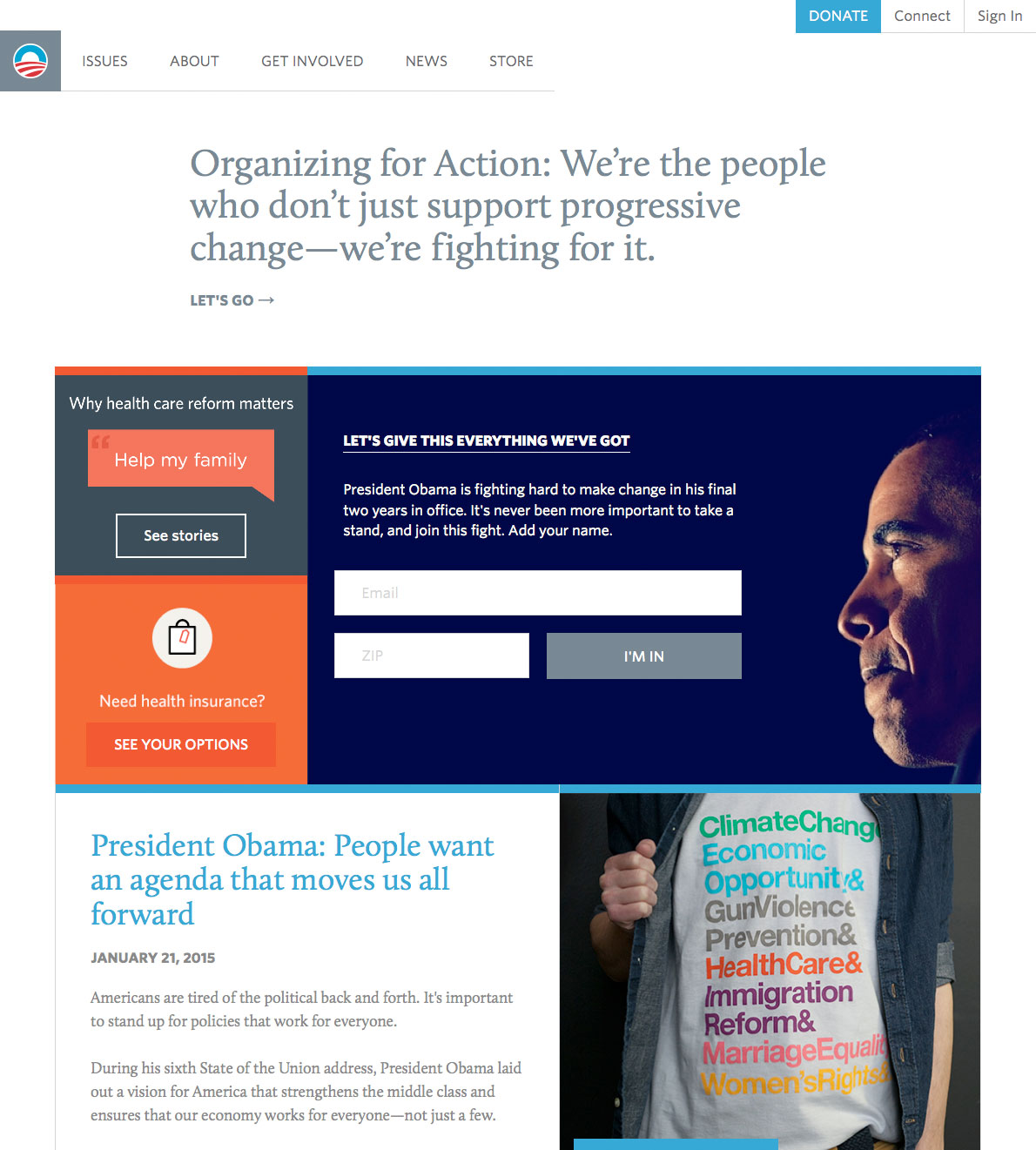 2014 redesign of Organizing for Action 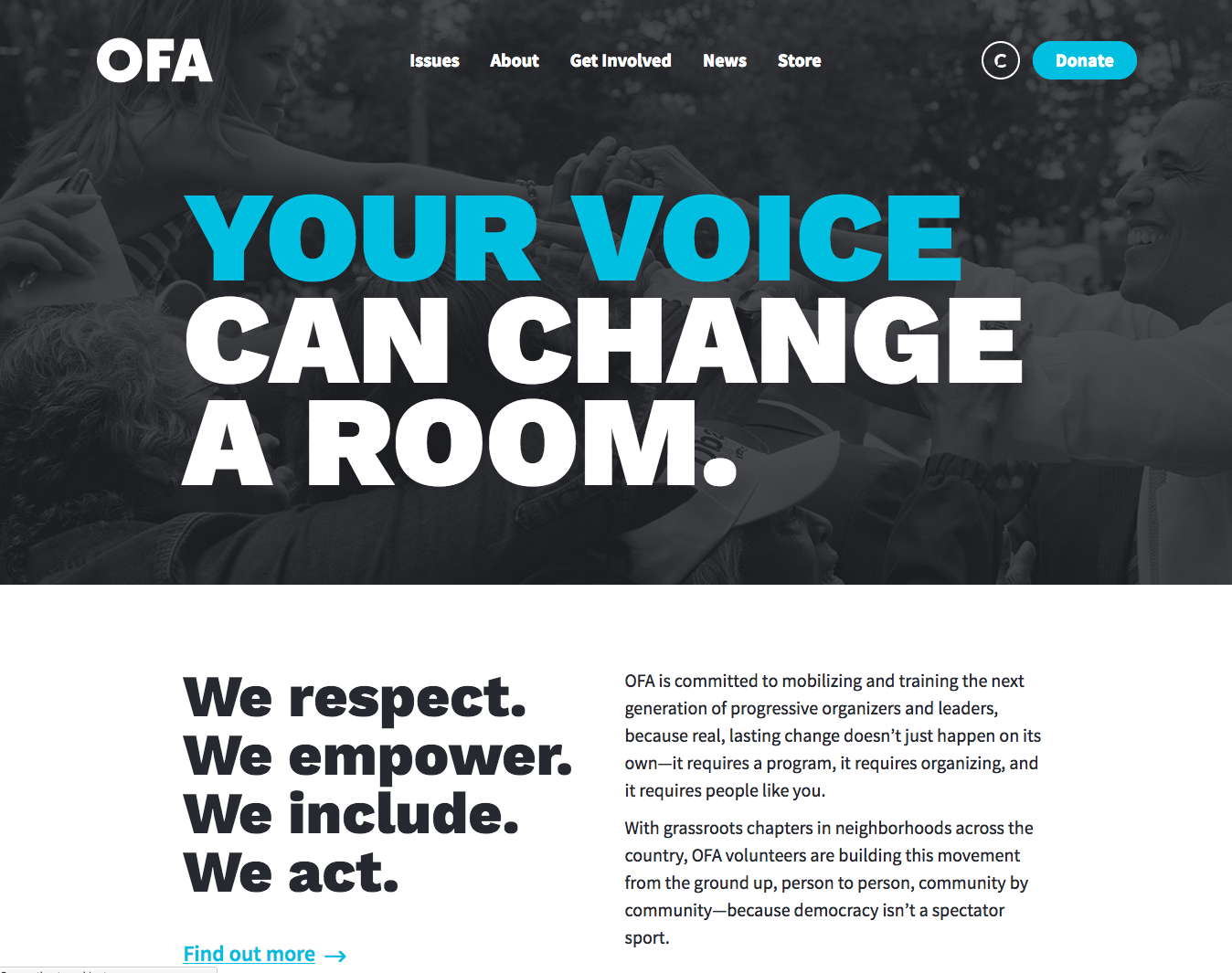 Organizing for Action as of January 2017 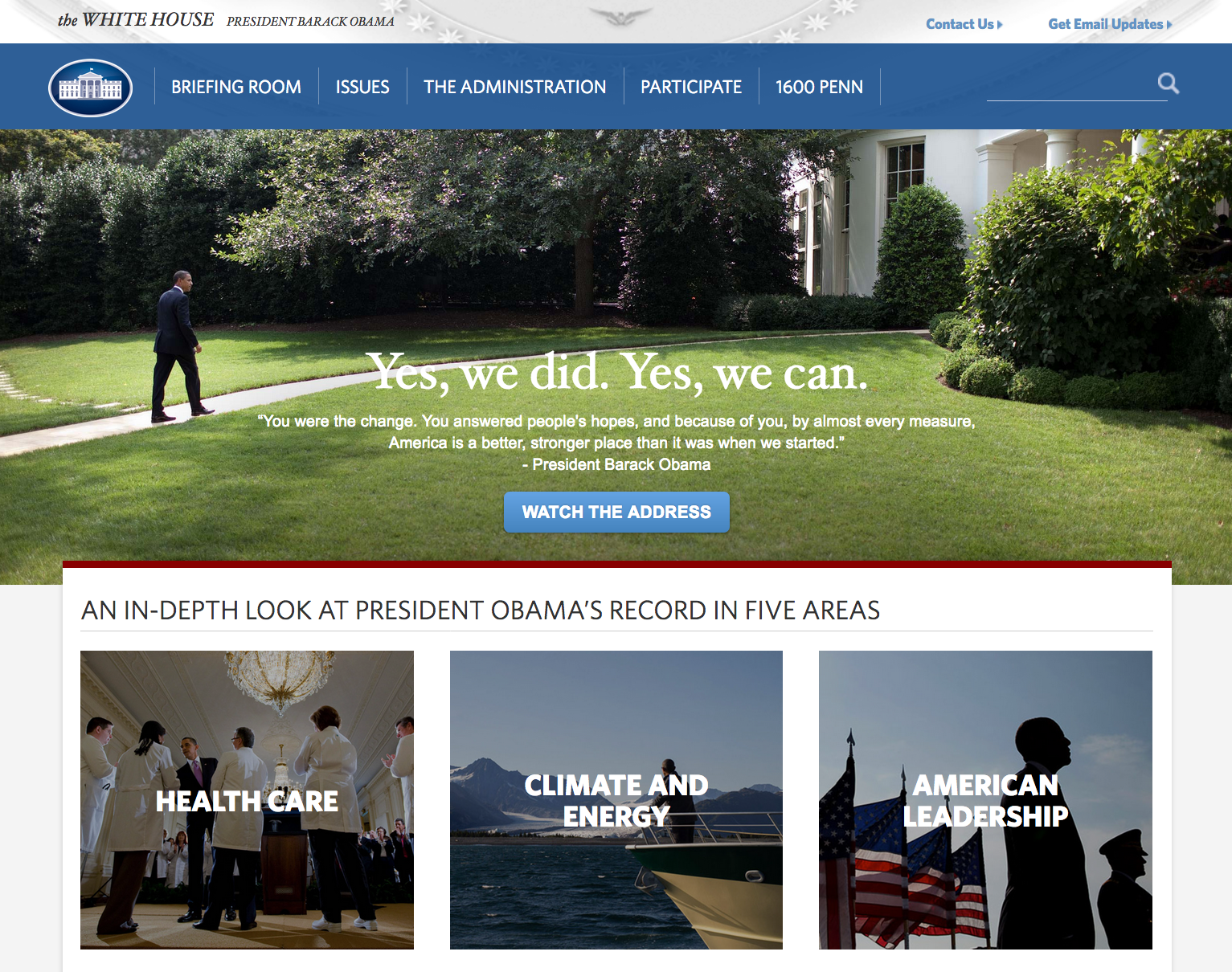 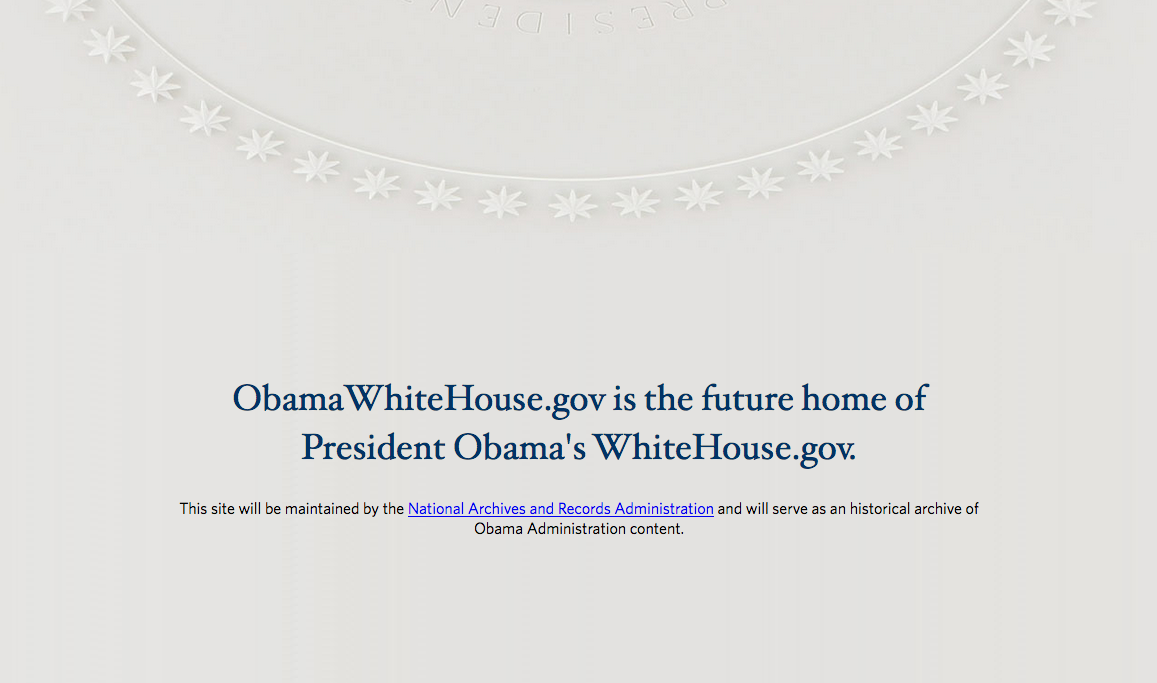 Preview page of ObamaWhiteHouse.gov, the home for an historical archive of the White House website during Obama's administration. Screenshot as of January 19, 2017 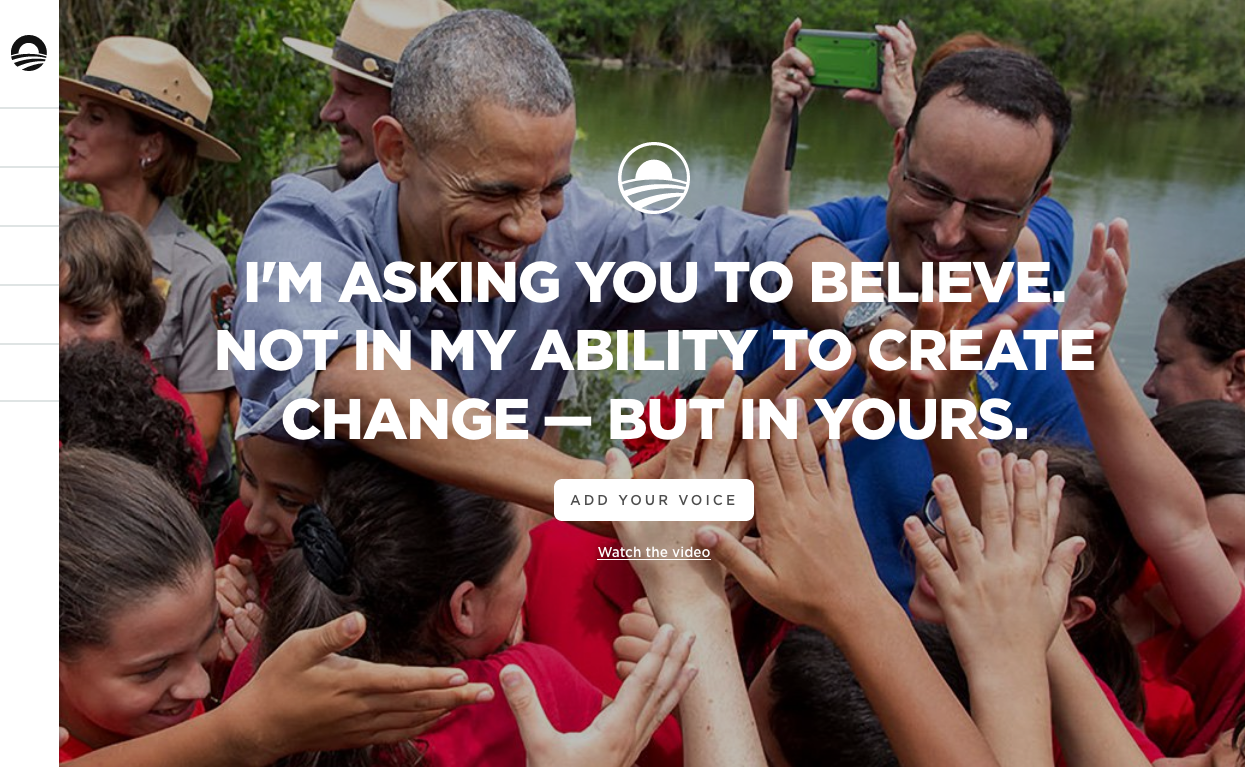 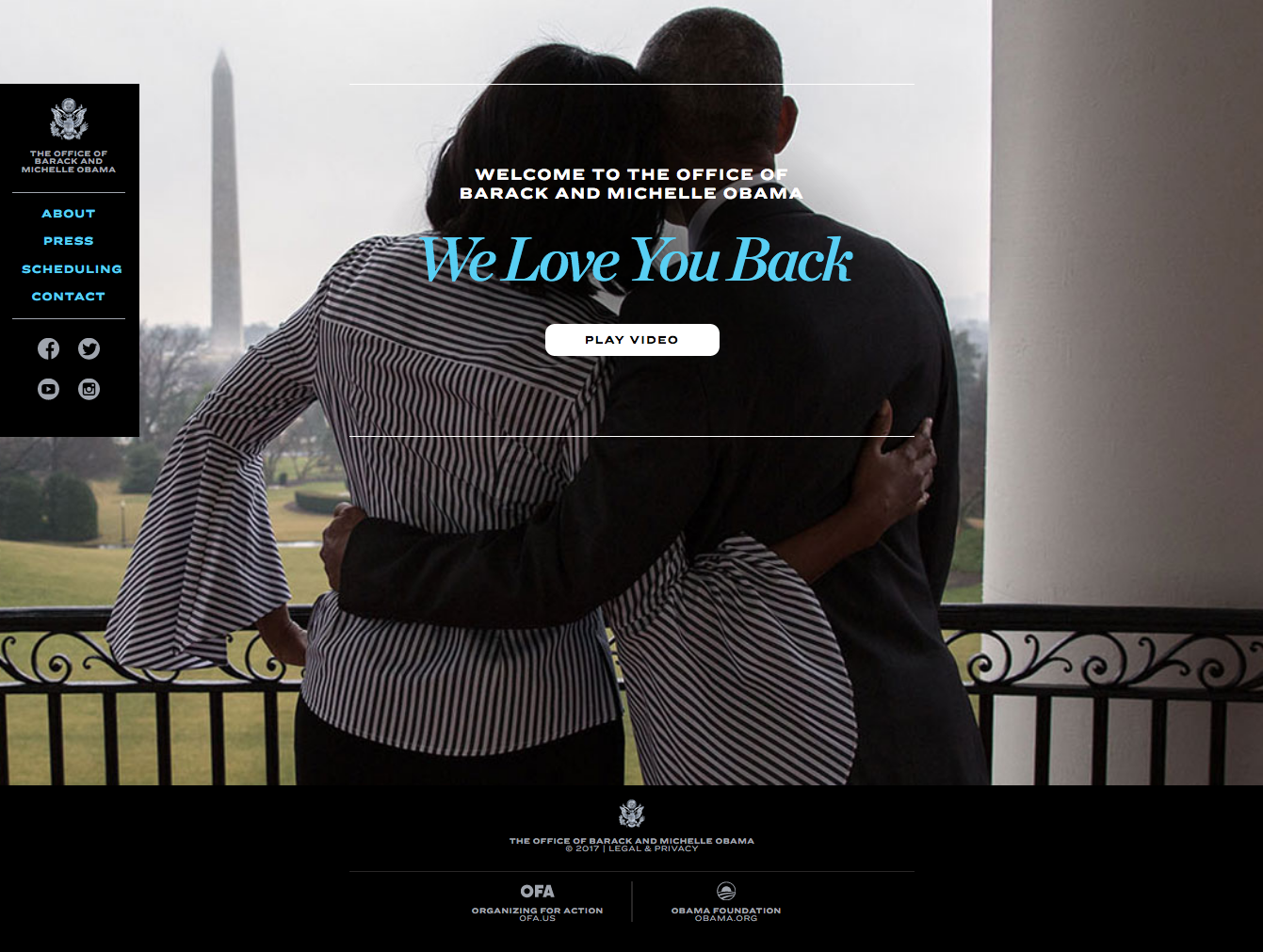 This list is updated regularly as related websites are updated.