This site is a reproduction of Byrne’s Euclid by Oliver Byrne from 1847 that pays tribute to the beautiful original design and includes enhancements such as interactive diagrams, cross references, and posters designed by Nicholas Rougeux.

Euclid’s Elements was a collection of 13 books about geometry originally written circa 300 BC. Shortly after the advent of the printing press, many editions and translations have been created over the centuries. Byrne’s 1847 edition of the first six books stands out for its unique use of colorful illustrations to demonstrate proofs rather than using letters to label angles, edges, and shapes. His edition was one of the first books to be published with such detailed use of colors and combined with its detailed diagrams makes it an impressive feat of publishing for the times and it stands out even today as a work of art.

A faithful reproduction with modern enhancements 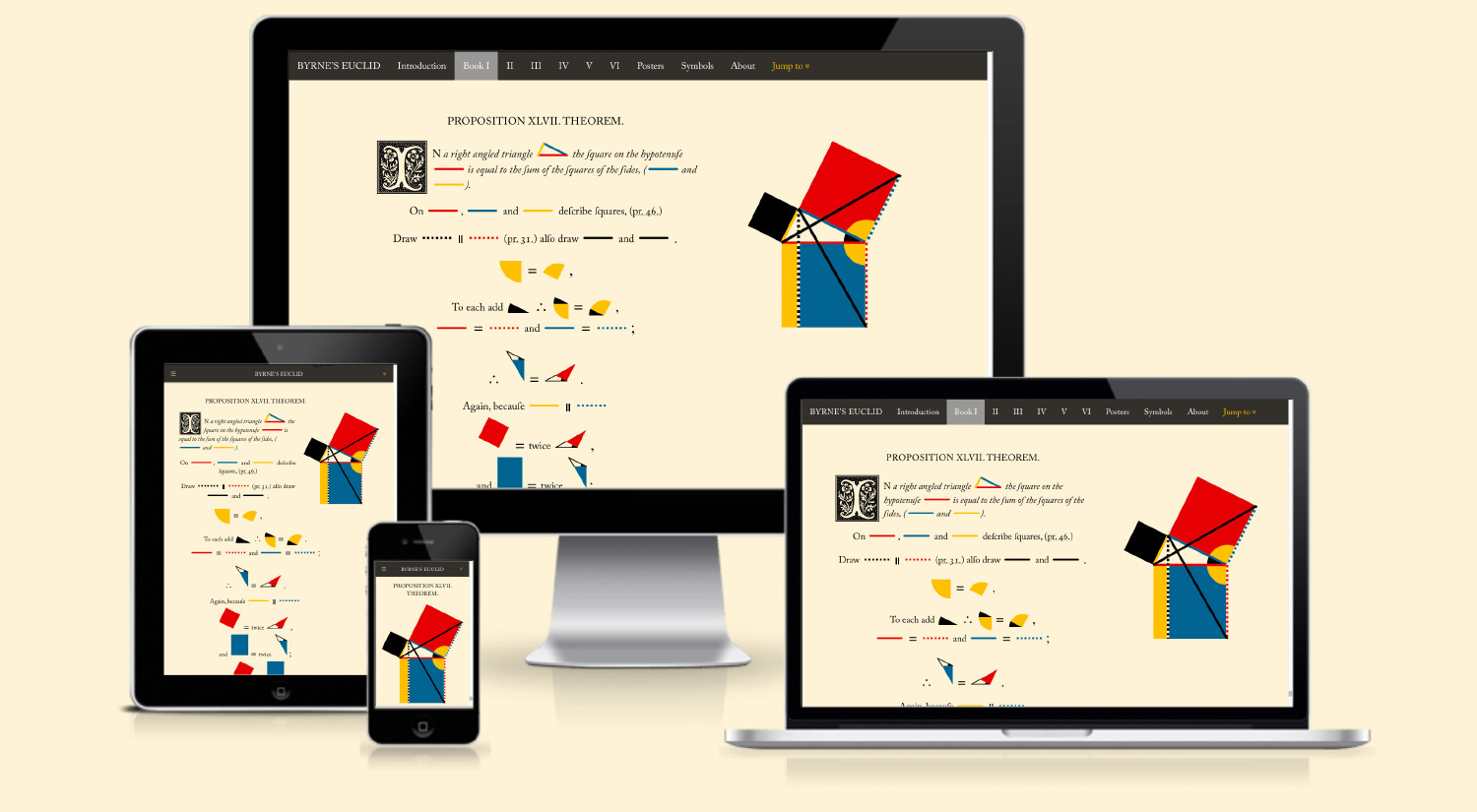 This site was created to bring Byrne’s colorful edition to life by making it available to a modern audience by reproducing the entire book online so it would be accessible to anyone with modern equipment and a flexible design as true to the original as possible. Each diagram was created by tracing the originals and ensuring their dimensions and relationships stayed true to Euclid’s geometric principles. Proofs accompanying each diagram have been enhanced with clickable shapes to aid in understanding the shapes being referenced. 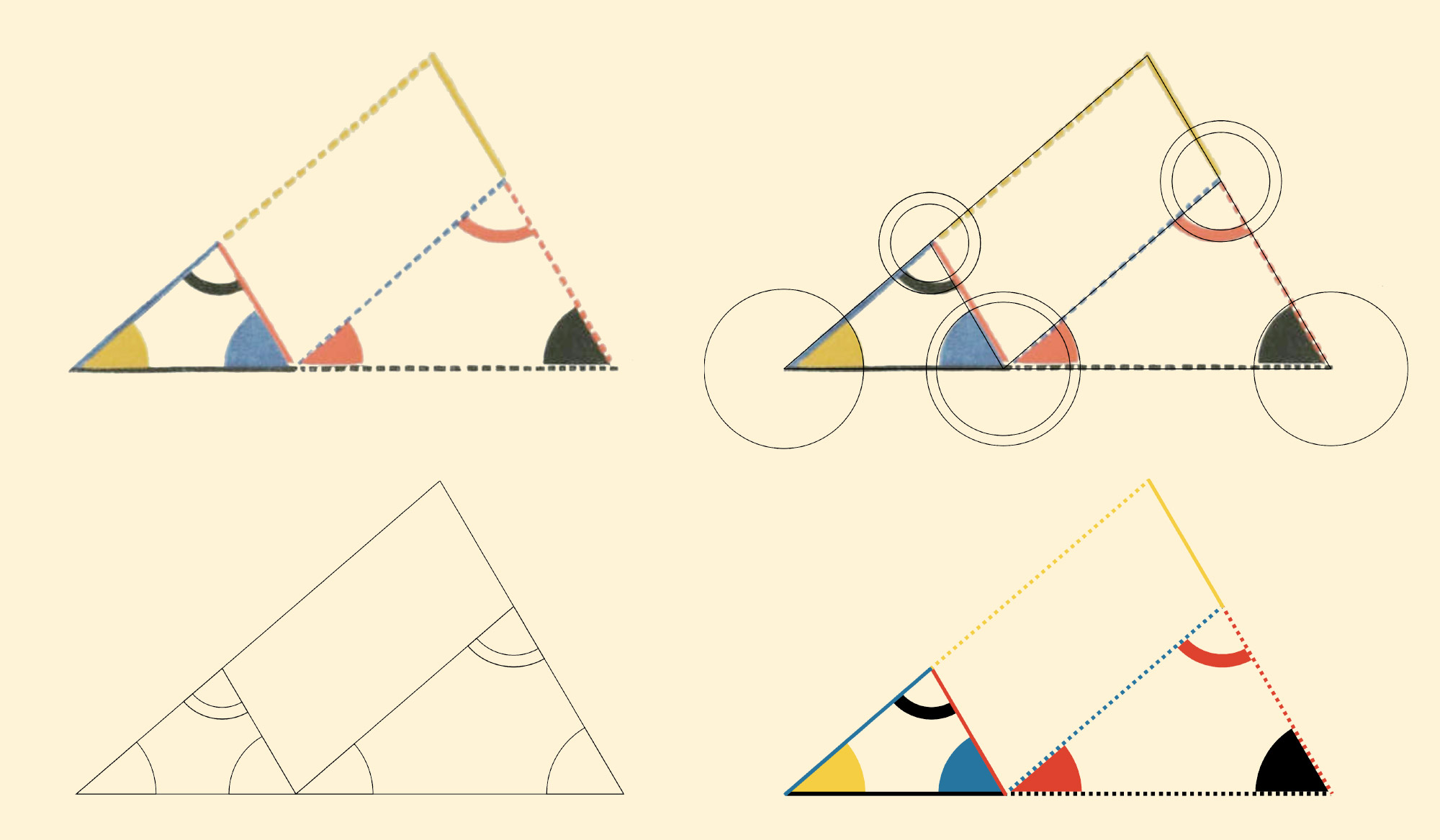 Many of Euclid’s propositions reference proofs defined in others using references like, “(B. 1. pr. 28)” which indicates that Proposition 28 from Book 1 was used as the basis for a given statement. Links have been added to these references to easily see which propositions, definitions, or axioms were used as the building blocks.

Careful attention has also been paid to typography. Like Byrne’s edition, this site uses the Caslon typeface. This site uses Adobe’s Caslon Pro for most of its copy—complete with discretionary ligatures and old style numbers.

The long s (ſ and ſ italicized) was common in older publications and is used throughout the original book. It can be mistaken for the lowercase f but should be read as s whenever seen. The usage of the long s has fallen out of style but in an effort to faithfully reproduce this book, it was used as well.

Learn more about the long s »

Byrne also makes use of alternate designs for common mathematical symbols like greater than (>), less than (<), parallel (∥), etc. These symbols are also often represented as larger than other characters so they’re visible when they appear next to other shapes. These unique representations of the symbols were recreated in the same style.

The beautiful initials that were originally designed by Mary Byfield that adorn the beginning of each section and proposition were reproduced as a custom font so they could be used on this site. They are also available for download free of charge under the Creative Commons public domain license.

How it was made »

Decorate your walls with a colorful detailed poster of every geometric illustration from Oliver Byrne’s colorful 1847 edition of Euclid’s Elements. 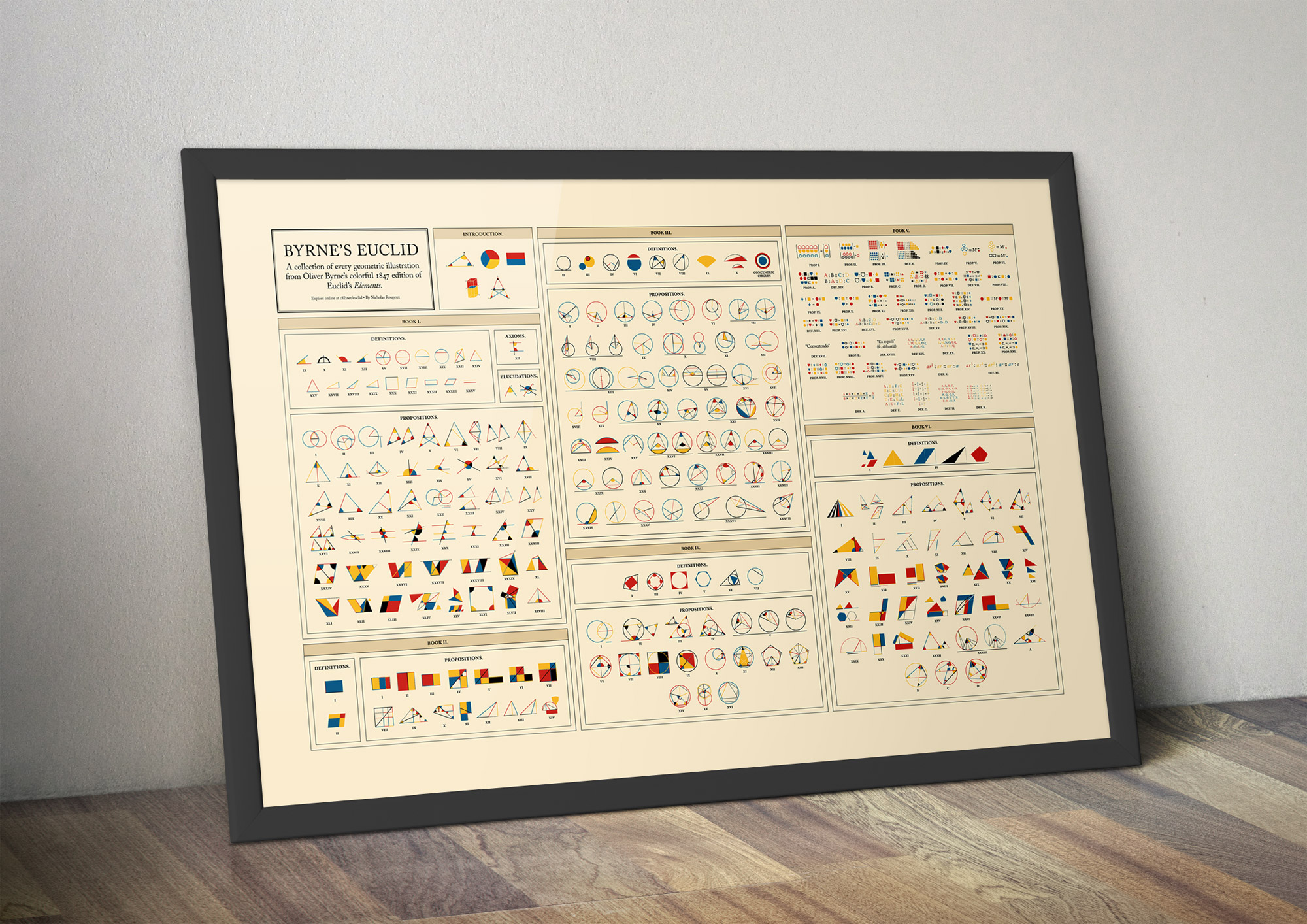 Several other talented artists have recreated Byrne’s Euclid with their own unique variations and improvements. Each of them are well worth the time to explore.

Posters and website design are copyright Nicholas Rougeux. All other content and diagrams are under the Creative Commons Attribution-ShareAlike 4.0 International license (CC BY-SA 4.0).

There are some advanced techniques being used on this site so only modern browsers are supported. These include Chrome, Firefox, Safari, and Edge. Internet Explorer is not supported.

Found a bug or typo? Let me know. Thanks for helping!