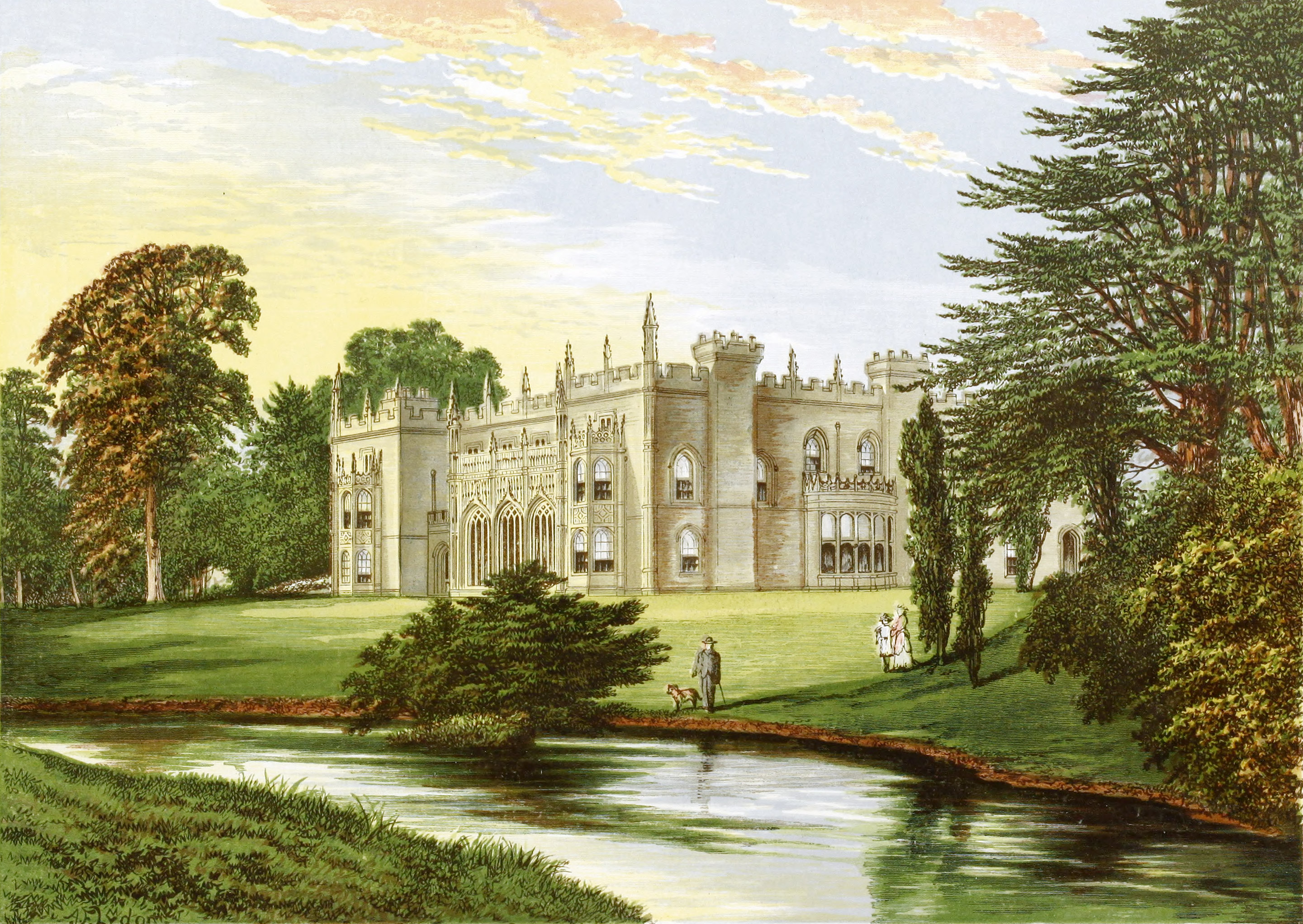 This mansion was raised on the ruins of an ancient priory, and is indebted to the tasteful exertions of the late Sir Roger Newdegate, Bart., for such improvements as render it a most elegant specimen of the compendious Gothic style. The house is seated in the midst of a fine and extensive park, well wooded and adorned with artificial expanses of water. The approach on the north is through a long and mag- nificent avenue of trees, the lines of which, rich in various foliage, are broken in a manner judiciously conducive to the picturesque. The exterior of the building is entirely cased with stone, and each front presents a separate design of architectural beauty, though all are consistent in general character.

The whole range of principal apartments is finished in the most costly style, and combines a selection of the more beautiful parts of Gothic architecture, made with exquisite taste. The ceiling of the dining room is enriched with pendant ornaments, and supported with taper pillars. In niches, delicately canopied, are placed good casts from the antique; and in a recess at the farther end is inserted the top of a sarco- phagus, brought by Sir Robert Newdegate from Rome, on which is sculptm^ed the marriage of Bacchus and Ariadne. The drawing room is of moderate but pleasing proportions, and is ornamented in a style particularly chaste. Inserted in the panels of this room are five whole-length family portraits, and different armorial bearings are introduced, on small shields in the tracery work of the ceiling. The fine bay window of the saloon looks into the gardens, which are extensive and disposed with much elegance. The ceiling of this apartment is elaborately worked in imitation of King Henry the Seventh^s Chapel. In the room adjoining the saloon is the well- known picture of which an engraving is given in the antiquities of Warwickshire. This curious painting commemorates—the achievements of Sir John de Astley, con- cerning whom Dugdale thus writes: ‘’Of the Patshull branch of the Astley family was John de Astley, who, on the 29th. of August, 1438, maintaining a duel on horseback, within the street called Antoine, in Paris, against one Peter de Masse, a Frenchman, in the prescence of Charles the Seventh, King of France, pierc’t the said Peter through the head, and had (as by the articles betwixt them conditioned) the helmit of the said Peter being so vanquish’d, to present unto his lady.

And on the 30th. of January, 20 of Henry the Sixth, undertook another fight in the Smythfield, within the city of London, in the prescence of the same King Henry the Sixth, with Sir Philip Boyle, an Arragonian Knight, who having been in France, by the King his master’s command, to look out some hardy person against whom he might try his skill in feats of armes, and missing there of his desires, repaired hither. After which combate ended (being gallantly performed on foot, with battil-axes, speares, swords, and daggers), he was knighted by the King, with an annuity of one hundred marks during his life. Nay, so famous did he grow for his valour, that he was elected Knight of the Garter.”

This family represents, through an heiress, the ancient and knightly race of the name descending from John de Newdegate, living in the third year of the reign of Edward the Third. In the male line it descends as follows:—

William Parker, Esq., of Salford Priors, in the county of Warwick, married Millicent Newdigate, daughter of Sir Richard Newdigate, Bart., of Arbury, in the same shire, and Harefield, Middlesex, and on the failure of the male line of the said family in the person of Sir Roger Newdigate, LL.D., the fifth Baronet, M.P. for Middlesex, 1742, and for the University of Oxford from 1750 for many following years. Pounder of the Prize for the popular “Newdigate” Poem, who died without issue November 23rd., 1806, the estates came to his descendants. Their third son,

Charles Newdigate Parker, Esq., of Harefield, who assumed by Royal License the surname and arms of Newdegate only. He married, April 15th., 1815, Maria, daughter of Ayscoghe Boucherett, Esq., of Willingham House and Stallingborough, Lincolnshire, and dying April 23rd., 1833, left an only son and successor,

Charles Newdigate Newdegate, of Arbury and Harefield, (the former of which estates he came into possession of on the death of his uncle, Francis Newdigate, Esq., of Kirk Hallam, Derbyshire, 1835,) J.P., D.L., D.C.L., M.P. for Warwickshire