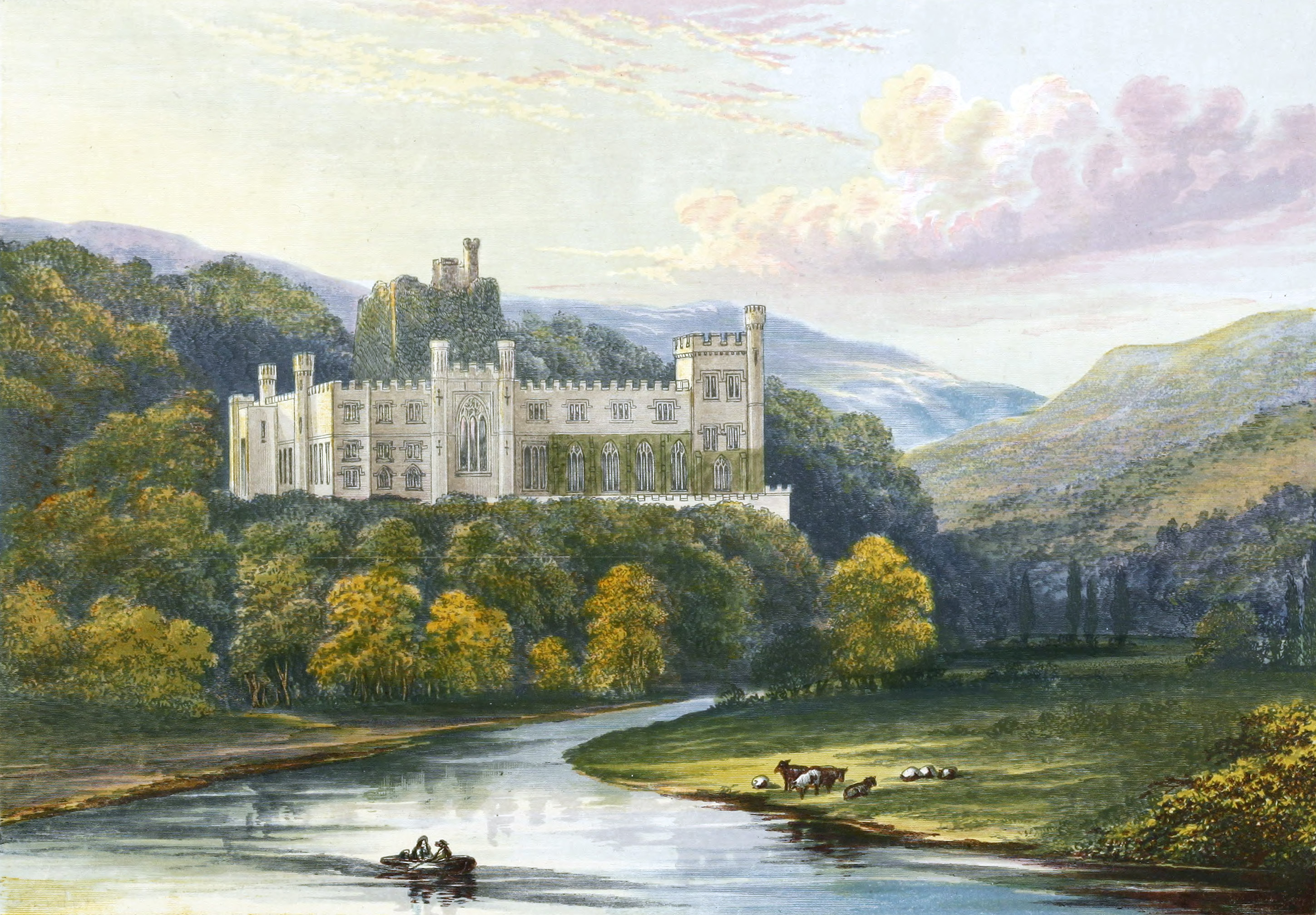 Near Arundel, Sussex.—Duke of Norfolk.

Arundel Castle, the ancient residence of tlie Dukes of Norfolk, is supposed to have been built at the beginning of the reign of King Alfred, and the first authentic notice we find of it is that it was bequeathed by that monarch to his nephew Athelm. Some authors have supposed Bevis, from whom one of the towers takes its name, to have been the founder of the Oastle of Arundel. Nothing more, however, is known for certainty than that Bevis was Warder at the Gate of the Earls of Arundel, and probably this tower was built for his reception. The next historical notice to be found of Arundel Castle, is in a grant made of it soon after the Norman Conquest by King William to Roger de Montgomery, created Earl of Arundel and Shrewsbury, who repaired it. In “Doomsday Book” it is described in the territory of Earl Roger, as a “Castle,” which is the only notice of a castle in that survey.

This old fortress suffered considerably during the Great Rebellion, and remained in a ruinous condition until the year 1791, when the then Duke of Norfolk restored a great part of it in the ancient style, and expended a considerable sum on it every year until his death. To complete the alterations, it became necessary to take down some of the most interesting parts of the building, but in many places the original walls were built upon, and considerable taste and judgment were evinced by his Grace in the selection of plans and materials.

The entrance gateway, anciently fortified by a drawbridge and portcullis, was built by Richard Fitz-Alan, in the reign of Edward the First, and was repaired and restored by the fifth Earl. The domestic offices occupy the whole of the ground-floor, around a spacious court; over these is a magnificent library, in imitation of the aisle of a Gothic cathedral, (the ornaments of which are taken from the cloisters at Gloucester and St. George^s, Windsor,) one hundred and seventeen feet long and thirty-five feet wide. The ceiling, columns, etc., are entirely of mahogany. The library is calculated to contain ten thousand volumes.

The Great Hall, called the Barons’ Hall, was begun in 1806, and is seventy-one feet by thirty-five, and thirty-six feet high, the roof being of Spanish chestnut curiously wrought, and the plan taken from Westminster, Eltham, and Crosby Halls. There is a series of stained glass windows, pourtraying the figure of some of the Barons from whom the Duke of Norfolk is descended, the heads of which are portraits of members of the Howard family. The window at the end of the hall represents King John signing Magna Charta.

The dining-room is a large and handsome apartment, having at one end a window of painted glass, representing Charles Howard, tenth Duke of Norfolk, and his Duchess, in the character of Solomon and the Queen of Sheba, at a banquet. At the opposite end is an orchestra, and over the door is an imitation of basso-relievo, by Le Brun, of Adam and Eve in Paradise.

Some of the walls, together with the Keep, are all that now remain of the ancient Castle of Arundel. The Keep is a circular stone tower, sixty feet in diameter, and is the most perfect in England.

At the time of the Great Rebellion Arundel Castle was first in the hands of the Parliament, but was taken from them, after sustaining a siege of three days, by Lord Hopton. Sir William Waller regained possession of it for the Parliament, with equal facility, about six months after. The famous Chillingworth acted as engineer on this occasion.

The descendants of Roger de Montgomery, Earl of Arundel, to whom, as above stated, this castle had been granted by the Conqueror, did not long keep possession of it; for in the reign of Henry the First, Robert de Bellesme, who sided with Robert, Duke of Normandy, in laying claim to the English crown, was, in consequence, deprived of all his honours, and outlawed by the reigning monarch. After this, the king settled the castle on Adeliza, his second queen, as part of her dower, and here she continued to reside during the remainder of her life. Upon the accession of King Stephen, Adeliza, refusing to countenance his usurpation, received the Empress Matilda into her castle of Arundel, wherein she was closely besieged by Stephen. There was an air of gallantry mixed with the warlike proceedings of this period, scarcely to be expected; and upon this occasion, intimation being given to Stephen that the Dowager Queen had received the Empress upon terms of hospitality, rather than of hostility against him, Stephen suspended the siege, allowed Matilda to go forth, and gave her a safe conduct to Bristol. Adeliza afterwards married William de Albini, one of the most accomplished men of his age.

Thus coming into the family of Albini, Arundel Castle continued in their possession until the death of Hugh, the last male heir, in 1243, when his estates were divided among his four sisters. In consequence of this division the castle and manor of Arundel went to Isabel, wife of John Fitz-Alan, who thereupon assumed the title of Earl of Arundel.

Edmund, fourth Earl of Arundel in descent from John Fitz-Alan, forfeited all the honours and estates of his family, in consequence of having joined the Barons in their opposition to the favourites of King Edward the Second, which was considered an act of rebellion. The king afterwards made a grant of Arundel Castle to Edmund Woodstock, his uncle. The act of attainder was, however, reversed upon the accession of Edward the Third, and Richard Fitz-Alan, son of the last possessor, was reinstated in the family title and estates.

The Earls of Arundel, from their influence, were led to participate in all the principal events of English history. Richard, Earl of Arundel, was accused of joining in a conspiracy to dethrone Richard the Second, and, being found guilty of high treason, was beheaded. The estates of this unfortunate nobleman were confiscated, and given as a reward for services to the Earl Marshal, on whose testimony the Earl of Arundel had been convicted. But this act of attainder was soon after reversed by Henry the Fourth, and the son, Thomas Fitz-Alan, recovered possession of the family estates. This nobleman died without issue in 1415, when the castle devolved upon his cousin. Sir John Fitz-Alan, commonly called Sir John Arundel. About this time a dispute arose respecting the title of Earl of Arundel. The contending parties were this Sir John Arundel, who claimed a seat in the Upper House in right of his tenure of the castle, and Thomas Mowbray, Duke of Norfolk, who preferred the claim. Judgment was given in favour of the former, and an Act of Parliament was passed to the effect that the possession of this castle and honour conferred the dignity of Earl without creation. The last male heir of the Fitz-Alans, who died in the reign of Elizabeth, left an only daughter, who married Thomas Howard, Duke of Norfolk, and thus conveyed the earldom and estate into that distinguished family, in which they have ever since remained.

The ancient family of Howard is derived, according to Dugdale, from an eminent judge of that name, who was Chief Justice of the Court of Common Pleas from the year 1297 to 1308, and who had large estates in the county of Norfolk.

Anything like a detailed account of the long line of representatives of the name from that date to the present day would be quite beyond the limits to which I am confined in these pages. The mere names of the heads of the family in succession are all that I have space for; as follows:—

Sir John Howard, Knight, summoned to Parliament as Lord Howard, and afterwards created Earl Marshal of England and Duke of Norfolk, June 28th., 1483, his son and heir being at the same time elevated to the Peerage as Earl of Surrey. He was a leading Yorkist, and fought on the side of Richard at Bosworth Field, with whom he fell in the battle, disdaining to attend to a warning set upon his gate the evening before,—

“ Jockey of of Norfolk, be not too bold,
For Dickon thy master is bought and sold.”

He was attainted by Parliament, November 7th., 1485, when all his honours became forfeited; as was also his son,

Thomas Howakd, (Earl of Surrey,) who however, after being imprisoned in the Tower for three years, was restored to the Dukedom, etc., and installed a Knight of the Garter. His elder son,

Thomas Howard, third Duke, was also attainted in 1546, but restored in 1553, and also installed a Knight of the Garter. He was followed (his son, Henry Howard, Earl of Surrey, having been tyrannically executed by Henry the Eighth,) by his grandson, son of the Earl,

Thomas Howard, fourth Duke. He too, was executed for high treason, on account of his connection with Mary Queen of Scots, and all his honours were of course forfeited, but his son,

Philip Howard, (Earl of Arundel,) also attainted, inherited in right of his mother the feudal earldom of Arundel, as owner of Arundel Castle, the possession of which conveys the title with it. His only son,

Thomas Howard, Earl of Arundel, born July 7th., 1592, was restored by James the First to the Earldom of Surrey, and the other titles his father had forfeited.

Henry Frederick Howard, Earl of Arundel, who had been summoned to Parliament as Baron Mowbray.

Thomas Howard, fifth Duke of Norfolk, (restored to the title by Act of Parliament in 1664.)

Henry Granville Howard, fourteenth Duke, who took the name of Fitzalan before that of Howard.