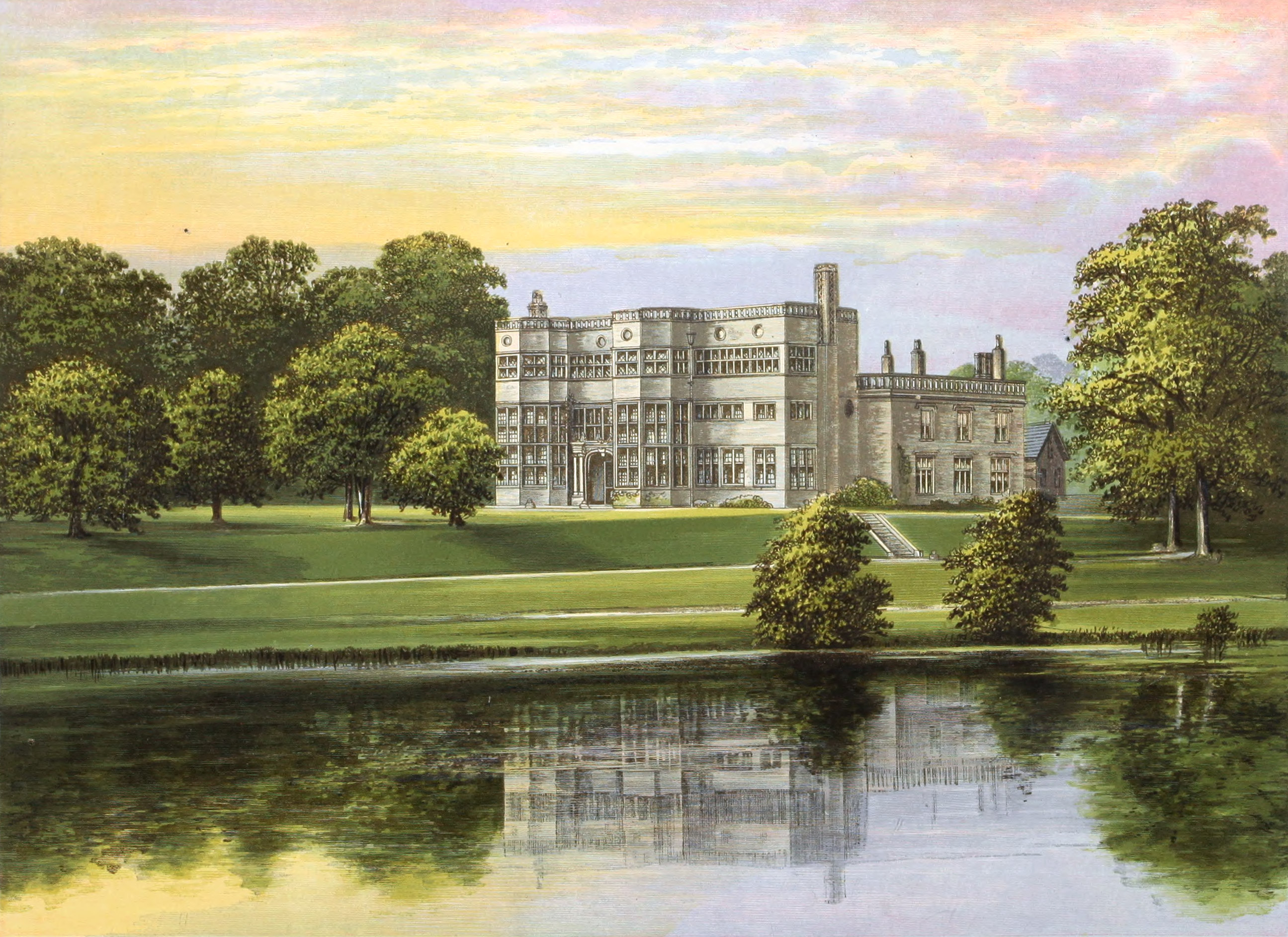 Astley Hall is picturesquely situated by a small piece of water, but it is stated that much of its beauty was destroyed by the cutting down of some fine timber, which is always so great an ornament. The drawing room has a richly ornamented ceiling, and is fitted up with antique furniture. One of the apartments is still called Oliver Cromwell’s Room, from his having slept there after the battle of Preston in 1648. The hall is spacious.

The house stands on the bank of the river Chor, from which the town of Chorley, about a mile distant, derives its name. The date of 1600 is carved on the oak timber in one of the walls, but part was much more ancient.

The estate at first belonged to the family of Charnock of Charnock, whose heiress brought it into that of Brooke, and from them it came, through their heiress, to the Hoghtons, as stated presently.

Sir William de Hoghton, died in his father’s lifetime, who therefore was succeeded by his grandson,

Sir Richard Hoghton, Knight, who died 1st. of Elizabeth, and was succeeded by his son, who was slain at Lea Hall, 32nd. of Elizabeth, having married Anne, daughter of Henry Kighley, Esq., and was father of

Sir Richard Hoghton, Knight, of Hoghton Tower, created a Baronet May 22nd., 1611 (on the institution of the Order). This gentleman married Katherine, daughter of Sir Gilbert Gerard, Knight, of Bromley, Staffordshire, Master of the Rolls. He was M.P. for Lancaster, and entertained King James I. for several days at Hoghton Tower in 1611. He died in 1630, and was succeeded by his eldest son,

Sir Gilbert Hoghton, Bart., who had previously received the honour of Knighthood, July 21st., 1606, and was a distinguished cavalier. He died in 1647, and was followed by his eldest son,

Sir Richard Hoghton, Bart., M.P. for Lancashire, who married Sarah, daughter of Philip, first Earl of Chesterfield, and dying, February, 1677–8, was succeeded by his son,

Sir Charles Hoghton, Bart., thrice M.P. for Lancashire, who married in 1G76, Mary, daughter of John, Viscount Massareene, and had, besides several other children,

Elizabeth, daughter of Thomas Sclater, Esq., of Denham, Lancashire, had, with two daughters, a son,

Henry Hoghton, of whom presently.

Sir Henry Hoghton, Bart., M.P. for Preston. He married, first, Mary, daughter of Sir “William Boughton, of Lawford, Warwickshire. She died February 23rd., 1719. He married, secondly, Elizabeth, widow of Lord James Russell, younger son of William, Duke of Bedford; and, thirdly, Susanna, eldest daughter of Thomas Butterworth, Esq., of Manchester, but having had no children, the title went to his nephew, the above-named

Sir Henry Hoghton, Bart., M.P. for Preston for thirty years. He married, first, Elizabeth, only daughter and heiress of William Ashurst, Esq., of Hedingham Castle, Essex, by whom he had an only daughter, Elizabeth. His wife died in 1762; and he married, secondly, July 8th., 1766, Fanny, eldest daughter and coheiress of Daniel Booth, Esq., of Hutton Hall, Essex. Their elder son (he died March 9th., 1795),

Sir Henry Philip Hoghton, Bart., some time M.P. for Preston, and Colonel of the Third Royal Lancashire Militia, born June 12th., 1762, married November 13th., 1797, Susanna, only daughter and heiress of Peter Brooke, Esq., of Astley Hall, in the County Palatine of Lancaster, with whom he acquired that estate, and widow of Thomas Townley Parker, Esq. Their son,

Sir Henry Bold Hoghton, Bart., born January 3rd., 1799, J.P., D.L., High Sheriff of Lancashire, 1829, Colonel of the Third Royal Lancashire Militia, and High Sheriff of Cardiganshire in 1849, married, for his first wife, May 23rd., 1820, Dorothea, second daughter and eldest coheiress (on the death of her sister Mary, wife of Prince Eustace Sapieha, of Poland), of Peter Patten Bold, Esq., of Bold, in the County Palatine of Lancaster. She died December 7th., 18-10, and himself July 19th., 1862. He had assumed by royal licence the additional name and arms of Bold. Their son,

Sir Henry Hoghton, Bart., J.P. and D.L. for Lancashire and Cardiganshire, born August 2nd., 1821, was authorised, with his brothers and sisters, to resume the originalnameofhisfamily,DeHoghton. Hemarriedthreetimes,butdied,December 2nd., 1876, without surviving male issue, when he was succeeded by his brother,