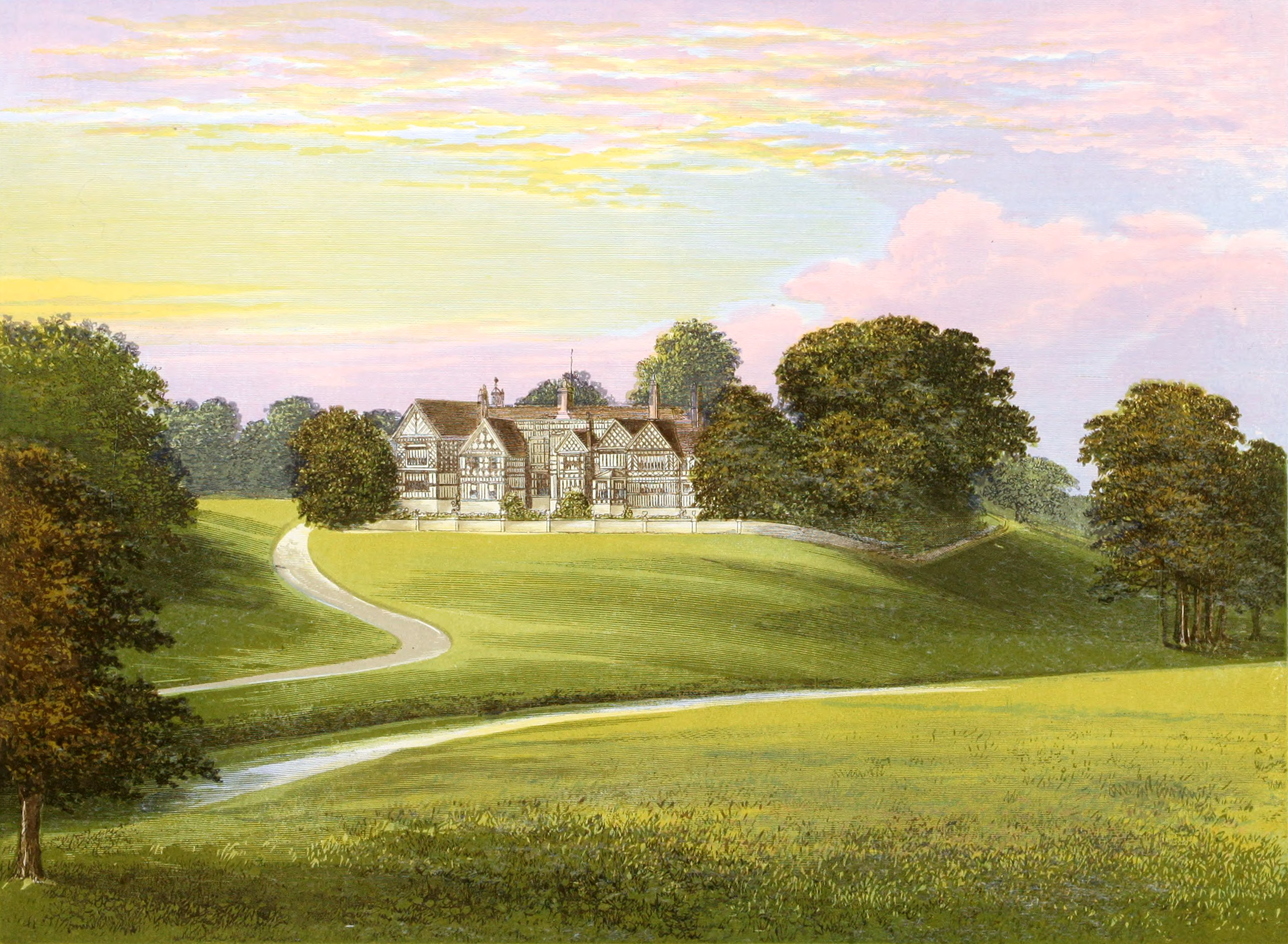 This ancient seat was in the olden time the property of the Bromliale family, from whom it passed to that of the present owner by the marriage, of Alice, daughter and heiress of Geoffrey de Bromhale, with John, the second son of Thomas Davenport, Esq., of Wheltrough, in the twenty-second year of the reign of Edward the Third.

With one of his descendants, Peter Davenport, it fared but ill in the time of the Civil War. He suffered at the hands both of the Royalists and Pai’liamentarians. The former plundered his household goods to the extent of a hundred pounds, consumed his provisions, damaged the house, and, he adds, in a long account of his misfortunes which has come down in his own words, “Ate me threescore bushells of oates.” On the other hand the Roundheads sequestered his property to the extent of five hundred pounds, his only offence being the delinquency he had been guilty of in allowing himself to be plundered by Prince Rupert’s soldiery. He piously concludes by saying, “I have already sufficient tryall, referring my future successe to the protection of the mighty God of Heaven, who will right me, as I hope, in His good time.”

He had good blood in his veins, in the best sense of the word, as appears from

the following godly remarks worked in tapestry in the “Paradise Room” with her own hands, by Dame Dorothy Davenport, wife of Sir William Davenport, whose name is inscribed under a carving of the family arms over the fireplace in the Great Hall—a noble room—with the date 1609.

“Feare God, and sleepe in peace, that thou in Chryste maycste reste, to passe these dayes of sinne, and raigne with him in blisse where angels do remayne, and blesse and prayse his name with songs of joy and hapines, and live with him for ever. Therefore O Lord in thee is my full hope and trust, that thou wilt mee defend from sin, the world, and divile, who goeth about to catch poor siuners in their snare, and bringe them to that place where greefe and sorrows are. So now I end my lynes and worke that hath beeue longe to those that doe them readc, in hope they will be pleased by me. Dorothy Davenport, 1636.”

This fine old mansion stands on a considerable elevation, between two deep valleys near the banks of a branch of the Mersey. The first appearance of the building is very striking, presenting a long and lofty liue of irregular buildings, chiefly of timber and plaster, erected about the time of Richard the Third, or the early part of the reign of Henry the Seventh,—a strong proof of the durability of the materials of which it is constructed. It was originally quadrangular, but its western side has been removed.

The Great Hall is the oldest part of the house, and a fine specimen of the decorations and furniture of the Elizabethan age. From it a spiral staircase, made of solid oak blocks, leads up to the drawing-room, wainscotted nearly to the ceiling, beneath which are the armorial bearings of the successive intermarriages with the family, the mantelpiece having those of Queen Elizabeth, who is said to have presented it to the Davenports.

Another room is in the eastern style introduced by the Crusaders, and bears the date of 1599. Here we are brought back to the time of the “Fine Old English Gentleman”—

“His hall so old was hung about with swords and guns and bows,
With pikes and good old bucklers that had stood against old foes,”—

to wit, buff coats, chain armour, etc., etc., and a large piece of tapestry, the work of the good Dame Dorothy. In the centre is an antique bedstead, and here too stands an ancient and heavy, but richly carved, cradle, in which the forelders of the race have slept the sweet sleep of innocence generation after generation. Also three spindles, now so out of date, and a venerable clock which has told the inmates of the flight of time. The roof of this room is paneled, the floor of solid oak, and the walls laid with the same old English wood. The chairs, drawers, and cabinets are all elaborately carved, and the walls are adorned with ancient embroidery-work.

The banquetting room, forty-two feet long by twenty-one wide, is also lined with oak, the roof held up by arches, which are decorated with foliage, quatrefoils, and rosettes, the windows Gothic, and in the centre of the room is a table of knotted maple wood eighteen feet long, and at the end an exquisitely-carved oaken sideboard.

While some repairs were being made in the building two small rooms were discovered, supposed to have been intended, as there need be no doubt they were, for a hiding-place for the family in the troubles of the Civil War.

The family crest, “a felon’s head, with a knotted halter round the neck,” is accounted for as having been borne in terrorem on the helmets of those who scoured the Peak and the Forest to hunt down the numerous gangs of banditti who therein harboured.

Among the numerous portraits is one of Sir Urian Legh, supposed to be the knight of whom I have often read in “Percy’s Reliques of Ancient British Poetry,”—

“Would you hear of a Spanish ladye
How she wooed an Englishman,
Garments gay as rich as may be
Decked with jewels she had on.”

Last, but not least, a private chapel adjoins the house, having over the entrance a summary of the Ten Commandments in black letter, and on either side quotations from the Fathers. In the east window is a painting of the Crucifixion, and in other parts some antique chairs, a curious oak carving, with the rose and the fetterlock, the bear and ragged staff, the plume of feathers, and other old remains.