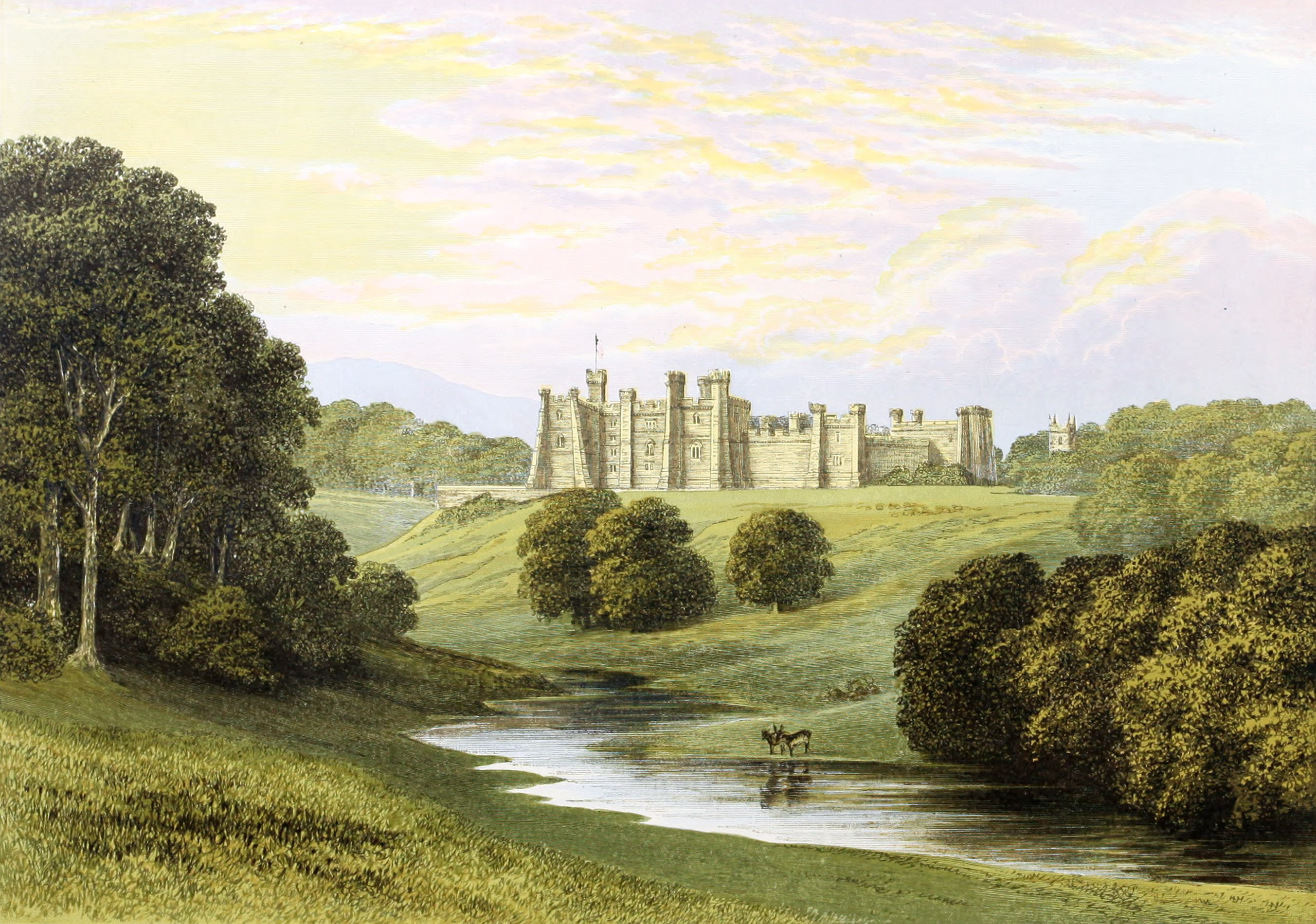 Brancepeth was anciently a seat of the great and potent house of Nevill, Earls of Westmoreland, than which there is no other more eminent, nor any so eminent, in the whole range of British aristocracy.

The old castle had been built by the family of Bulmer before the Norman Con- quest, and was strongly fortified with towers, and defended by a moat. Part of the original building still remains, and among other fine rooms the “Barons’ hall,” which in the year 1821 was ornamented with stained glass windows, the west one repre- senting views of the memorable battle of Neville’s Cross. The greater portion, however, was taken down by Matthew Russell, Esq., and the present noble structure erected on its site. It stands a little to the south of the village of the name. The Church is beautifully embowered in foliage. A stream, called the Hockley, runs through the park and falls into the Wear.

This is a branch of the ducal house of Hamilton, of which His Grace the Duke of Abercorn is the head. It springs from

The Earl of Arran (second of the title), Regent of Scotland, father of

Sir Frederick Hamilton, who married Sydney, daughter and heiress of Sir John Vaughan, signalised himself in the wars of Gustavus Adolphus, the renowned King of Sweden, and was afterwards made Governor of Ulster. His son,

Gustavus Hamilton, was a distinguished military officer in the service of King William the Third, for whom he raised sis regiments, two of them still well known as the Inniskilling Dragoon Guards. For his services at the Battle of the Boyne, Siege of Londonderry, and taking of Athlone, he was rewarded with a grant of forfeited lands, appointed Brigadier-General of the King’s armies, and made P.C. In the reign of Queen Anne he was advanced to the rank of Lieutenant-General, and elevated by George the First to the Peerage of Ireland, in 1715, as Baron Hamilton, of Stockallen, and created Viscount Boyne, August 28th., 1717. He married Elizabeth, daughter of Sir Henry Brooke, of Brooke’s Borough, in the county of Fermanagh.

Frederick Hamilton, who left, by his wife Sophia, sister of James, Viscount Limerick, at his decease in 1715, a son, who succeeded his grandfather, namely,

Gustavus Hamilton, second Viscount Boyne, at whose decease, unmarried, in 174G, the honours devolved on his cousin,

Frederick Hamilton, third Viscount Boyne, (eldest son of Gustavus Hamilton, of Red Wood, in the King’s County, M.P. for the county of Donegal, by his wife, married in January, 1717, Dorothea, only daughter of Richard Bellew, first Lord Bellew.) He married, in 1737, Elizabeth, daughter of Benjamin Hedley, Esq., but dying without children, in 1772, was succeeded by his brother,

Richard Hamilton, fourth Viscount Boyne, born March 2 Ith., 1724, who married Georgiana, second daughter of William Bury, Esq., of Shannon Grove, in the county of Limerick, by whom he had, with others—he died July 30th., 1789—

Gustavus Hamilton, seventh Viscount Boyne, born April 11th., 1797, married, September 9th., 1828, Emma Maria, daughter of Matthew Russell, Esq., M.P., of Braucepeth Castle, Durham, and ou her succeeding to that property, on the death of her brother, in 1850, he assumed, by Royal License, the name and arms of Russell in addition to his own. His Lordship was created Baron Brancepeth, August 31st., 1866. He died October 27th., 1872, having had one son,