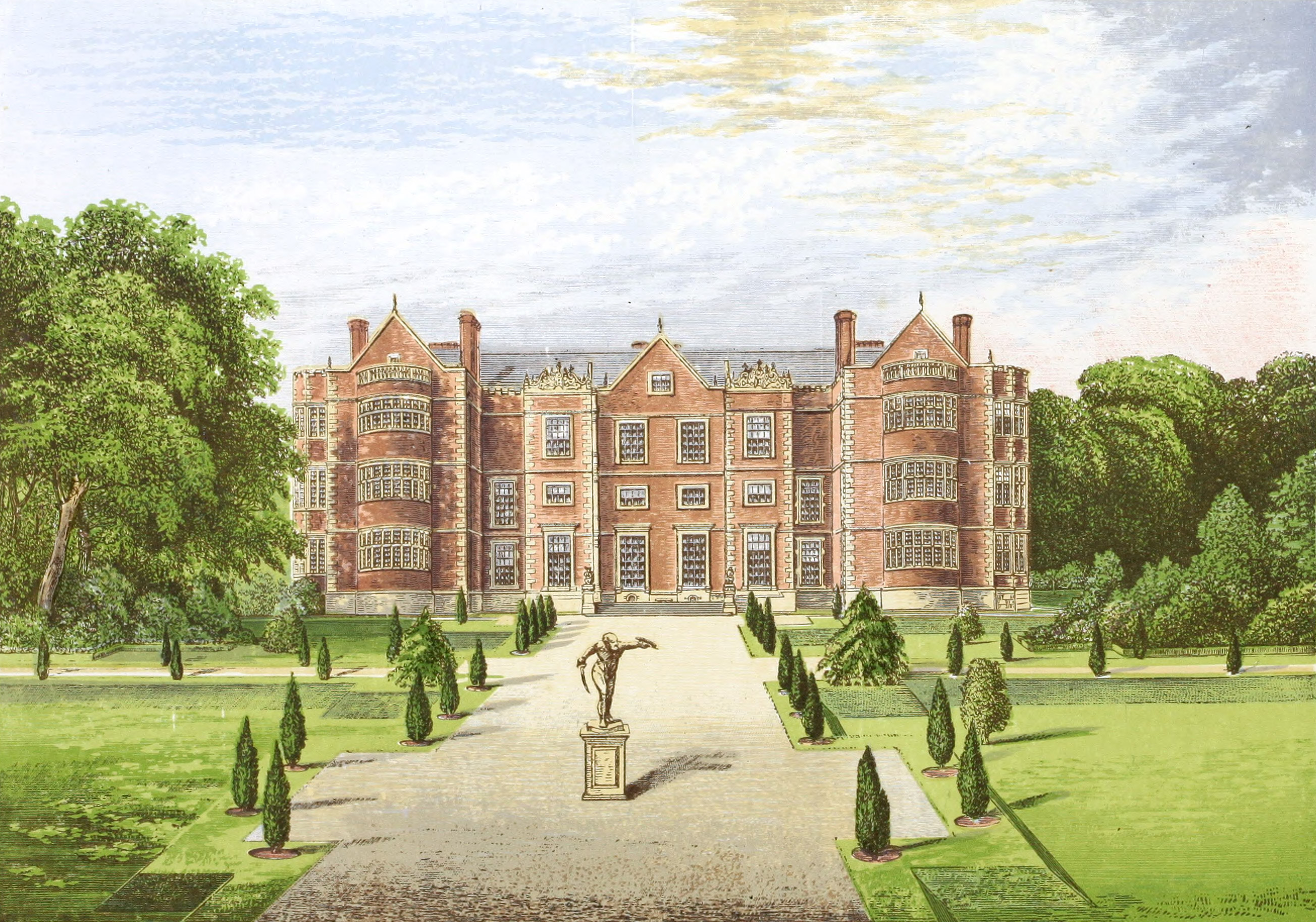 This very fine and interesting specimen of an English gentleman’s country-seat is situated in the East-Riding, on a gentle eminence at the edge of the Yorkshire Wolds, commanding an extensive view over Holderness and the level lands at the foot of the hills just mentioned. It has a south aspect, and is a good example of the style of architecture which was prevalent in the reigns of Queen Elizabeth and King James the First. It is said to have been built after a design by Inigo Jones. The house is of brick, with stone quoins.

There are some very fine rooms within, elegantly fitted up, and containing a good collection of family portraits and other paintings.

The entrance-hall is very large and lofty, and the chimneypiece is elaborately carved with figures of the wise and foolish virgins. There is a magnificent screen, carried up to the top of the room, and richly ornamented with a mass of the most delicately-traced carving. It was brought here from Barmston, a neighbouring village and lordship belonging to the family.

A staircase of quaint design leads up to the “Long Gallery,” which has a coved ceiling in imitation of a bower of trellis-work, intertwined with roses and creeping plants. There are some pictures on the panel-work said to be by Rubens.

In front of the house is a massive gateway, with four small octagonal towers.

In the space between it and the hall is a statue of a Gladiator.

The Parish Church is close to the mansion, and has several very elegant monuments of the families of Somerville and Griffith, one of them of alabaster, on which are the effigies of a knight and his lady, and above it a window of richly-decorated stained glass of recent manufacture.

The family of Boynton is stated to derive from

Bartholomew de Boynton, (Boynton is an adjoining parish at the other side of the Wolds,) living in 1067, who was an ancestor of

Matthew Boynton, Esq., who married Anne, daughter of Sir John Bulmer, of Wilton, and was succeeded by his son,

Sir Thomas Boynton, M.P. for Boroughbridgo and High Sheriff of Yorkshire in the reign of Queen Elizabeth. He was succeeded by his son,

Sir Francis Boynton, High Sheriff in 1596. This gentleman married Dorothy, daughter and co-heiress of Christopher Place, Esq., of Halnaby, and dying April 9th., 1617, was succeeded by his only surviving son,

Sir Matthew Boynton, Knight, of Barrnston and Boynton, who was created a Baronet May 25th., 1618. Sir Matthew sat in Parliament in the reign of Charles I., and sided with the republicans during the civil wars. He married, first, Frances, daughter of Sir Henry Griffith, Knight, of Burton-Agnes, in Yorkshire, sole heiress of her brother, Sir Henry Griffith, Baronet, (a family now long extinct in the male line,) and thus brought Burton-Agnes into the Boynton family.