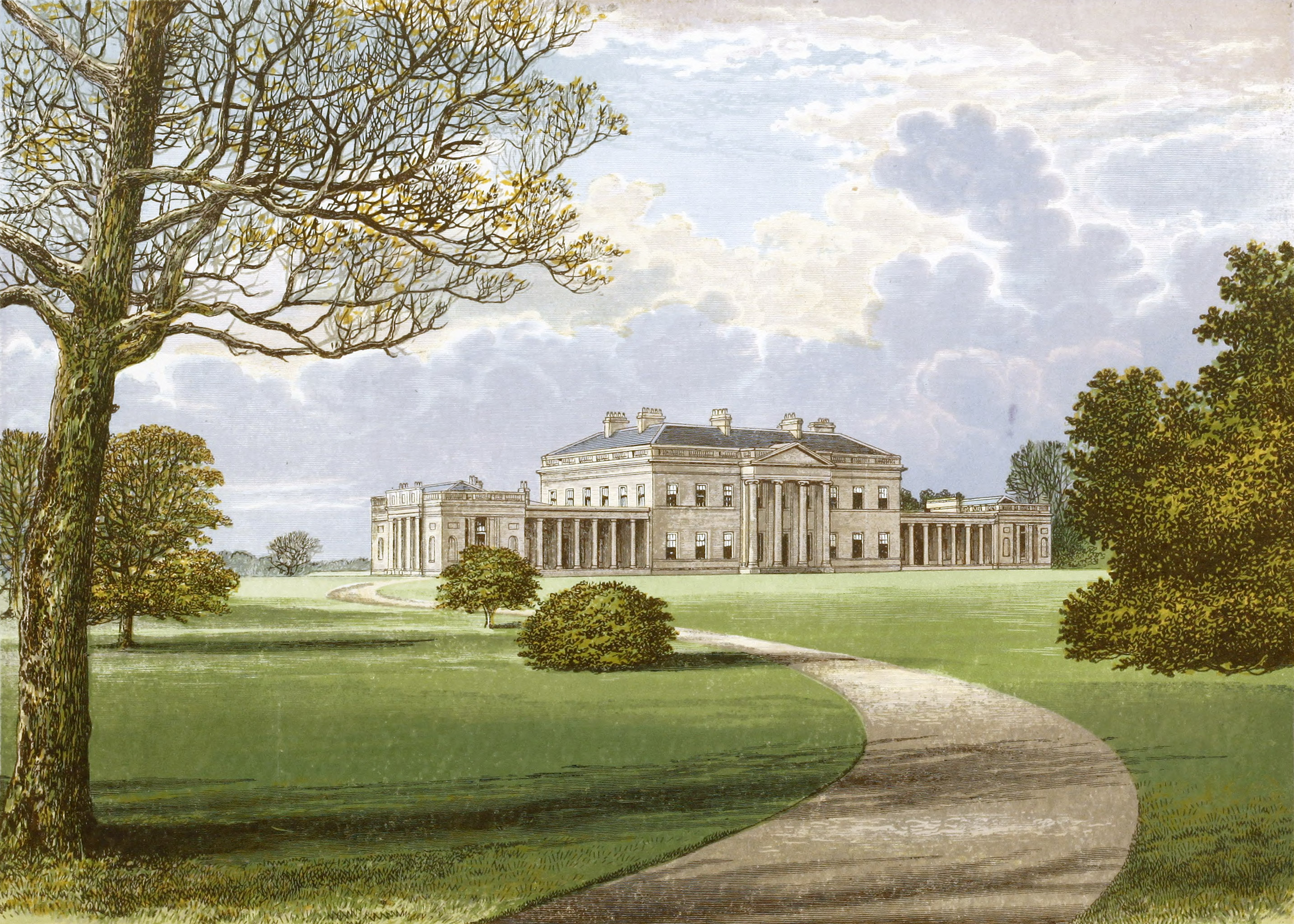 This mansion is situated in the midst of the beautiful demesne of the same name. It commands an extensive woodland view to the south-west, with a fine mountain background, while the back, or more correctly the north-west front, looks down upon a picturesque lake (Lough Coole) of some forty acres of water. A flock of grey-lag wild-geese, which settled here, it is said, several generations ago, have become domesticated on the lake, never straying far from its shores. There are four small wooded islands near the borders of the lough, which are possibly ancient Irish cranages. The demesne contains two other lakes: one. Lough Yoan, of considerable size; the other, Breandrum Lake, much smaller.

The timber at Castle Coole is a noticeable feature in the landscape. There is a row of beech trees, some of which are about one hundred and twenty-five feet in height, supposed to have been planted early in the last century; and another, not so high, but containing some magnificent specimens, planted probably about 1750.

The present mansion-house was erected towards the close of the last century, by the first Lord Belmore, from the plans of the celebrated James Wyatt, at a cost of towards £60,000. It is faced with Portland stone. It contains five handsome Reception Rooms. The Billiard Room to the right, and the Library to the left of the front Hall are thirty-six or thirty-seven feet long, by twenty-four feet wide, and eighteen feet high. The Drawing-room corresponds with the Library, and the Dining-room with the Billiard Room, on the back or north-west side of the house, and are divided by a very handsome oval Saloon. The Library and Drawing-room are divided by the inner Hall, containing a stone staircase with two branches. Above the Saloon is a large bow-windowed sitting-room, commanding an extensive and beautiful view, including Lough Coole; this room is divided from the state bedroom to the front by a lobby, lighted by skylights, and surrounded by a gallery from which open the bedrooms, etc., on the second storey.

The mouldings of some of the cornices and ceilings at Castle Coole are very elaborate, and were executed by Mr. Joseph Rose, of London, it is believed from the designs of Mr. Wyatt.

In the front Hall are two fine scagliola pillars, and two pilasters, by Mr. Bartoli. There are some more in the inner Hall.

The estate of Castle Coole came into the family of Lord Belmore by marriage.

The residence of the Lowry family was previously at Ahenis, near Caledon, County Tyrone.

The original “patentee,” or grantee, of the manor of Coole was Captain Roger Atkinson, temp. James I. This gentleman, who was for a time M.P. for Fermanagh, sold the property circa 1641. In 1655 it was resold to John Corry, of Belfast, who dying between, it is supposed, 1680 and 1689, was succeeded by his son, James Corry, subsequently M.P, for Fermanagh and Colonel of the Militia.

The original house having been burnt by order of the Governor of Enniskillen in 1689, to prevent its being occupied by the Duke of Berwick’s army, a new house was erected about 1709, not far from the present mansion, the broad oak avenue leading up to which now forms an important feature of one of the approaches to the present house. This house was accidentally burnt about the time the present one was completed.

Leslie Corry, then a minor, who died in 1741, and bequeathed this portion of his property to

Margetson Armar, his cousin, and the husband of his third sister, Mary. Colonel

Armar dying in 1773, left the estate to his wife for her life, and after her death to her second sister, Sarah. Mrs. Armar dying the following year, was succeeded by her sister, Sarah Lowry Corry, widow of Galbraith Lowry, M.P. for Tyrone, who had assumed the name of Corry on succeeding, some years previously, to another portion of the Corry estates in the county of Longford. Mrs. Lowry Corry died in 1779, and was succeeded at Castle Coole by her son,

Somerset, second Earl, previously M.P. for Tyrone, and subsequently Governor of Jamaica and a representative Peer. He died in 1841, and was succeeded by his son,

Armar, third Earl, some time M.P. for Fermanagh, who, dying in 1845, was succeeded by his son,