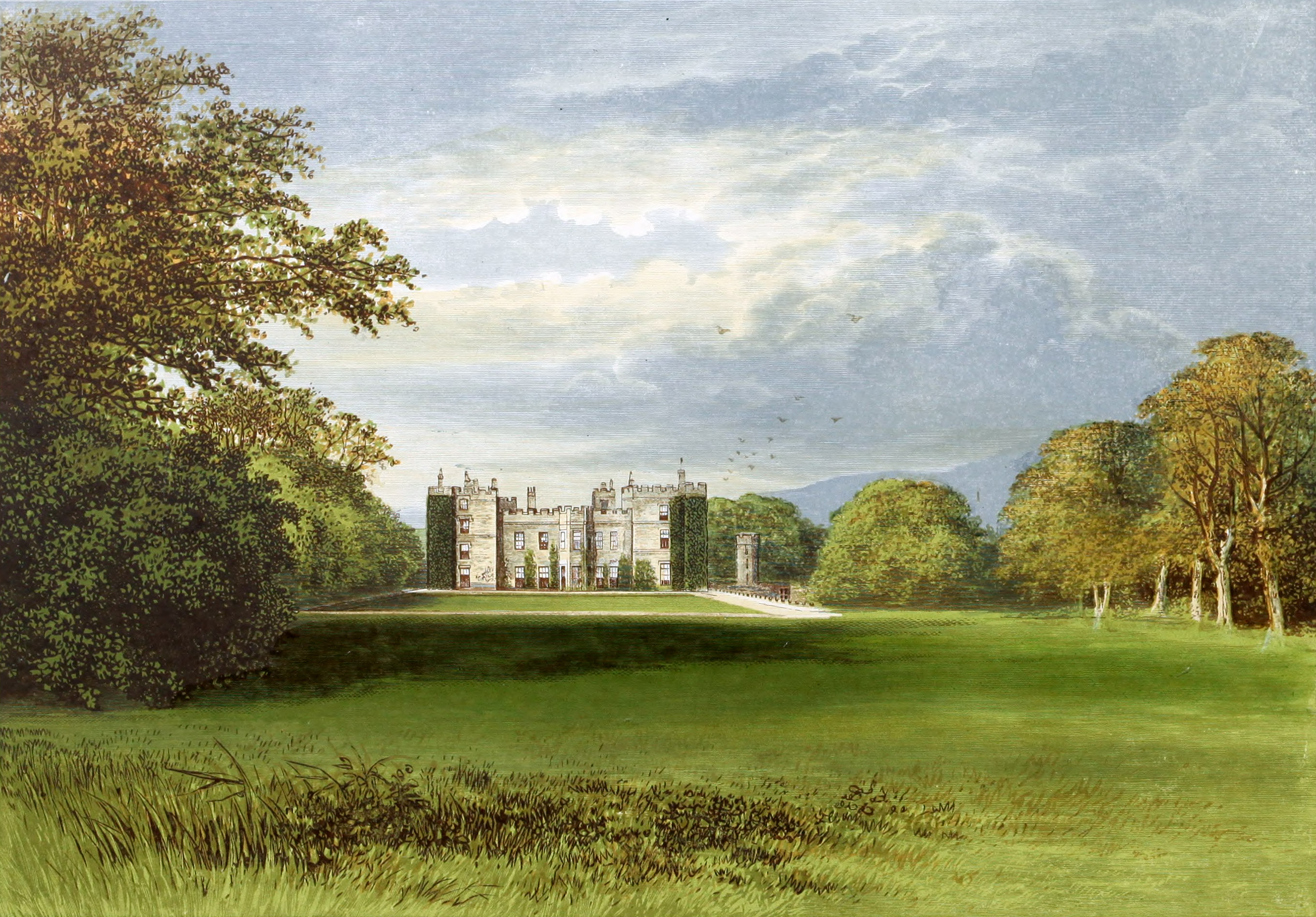 Near Wooler, Northumberland.—Earl of Tankerville.

Chillingham, originally called Chevelingham, was at one time held by

Robert de Muscamp. It afterwards came to the family of

Grey, Barons of Werke, from whom it was inherited by the present family.

The house, which is a large and massive structure, was rebuilt in the reign of Queen Elizabeth.

It contains several interesting portraits, as, among others, of Lord Chancellor Bacon, Lord Treasurer Burleigh, Buckingham, King Charles, and James the Second, etc.

The greatest object of interest about the place is the well-known herd of wild cattle, the Chillingham oxen, still preserved in the park of the estate. They are white, with the tip of the nose black, as are also the tips of the ears and a rim round the eyes.

In the neighbourhood are two circular entrenchments, and about a mile off a stone cross, twelve feet high, called the Hurle Stone.

Thomas Bennet, Esq., of Clapcot, married Anne, daughter of Molines, of Mackney, Oxfordshire. The elder of his two sons,

Sir John Bennet, Knight, LL.D., of Dawley, Middlesex, M.P. in the reign of Elizabeth, was afterwards appointed Chancellor to Anne, Queen Consort of King James the First, Judge of the Prerogative Court of Canterbury, and Chancellor to the Archbishop of York, and was sent as Ambassador to Brussels in 1617. He married Anne, daughter of Christopher Weeks, Esq., of Salisbury, and had, with another, younger son,—he died in 1627,—

Sir John Bennet, Knight, of Dawley, who married Dorothy, daughter of Sir John Crofts, Knight, of Saxham, Suffolk, and had two sons, the elder of whom,

Sir John Bennet, K.C.B., was created a Peer of the Realm, November 24th., 1682, by the title of Baron Ossulston, of Ossulston, in the county of Middlesex. He married, first, Elizabeth, widow of Edmund Sheffield, second Earl of Musgrave, and daughter of Lionel Cranfield, Earl of Middlesex, but had no children. He married, secondly, Bridget, daughter of John Howe, Esq., of Langar, Nottinghamshire, aud dying in 1685, was succeeded by his only son,

Charles Bennet, second Baron Ossulston, born in 1674. His Lordship married, in 1695, Lady Mary Grey, only daughter of Forde, Lord Grey of Werke, Viscount Grey of Glendale, and Earl of Tankerville, and was created Earl of Taneerville,— the title of his deceased father-in-law,—October 19th., 1714. He died May 21st., 1722, and was succeeded by his only surviving son,

Charles Bennet, second Earl of Tankerville, K.T. He married Camilla, daughter of Edward Colvile, Esq., of Whitehouse, in the county of Durham, and oue of the Ladies of the Bedchamber to Queen Caroline. At his death, March 14th., 1753, his eldest son succeeded,

Charles Bennet, third Earl of Tankerville, who married, in 1742, Alicia, third daughter and coheiress of Sir John Astley, Bart., of Pateskull, Staffordshire, and left, at his death, October 27th., 1767, with other children, an eldest son,

Charles Augustus Bennet, sixth Earl of Tankerville, P.C., Captain of the Honourable Corps of Gentlemen-at-Arms, and Lord Steward of Her Majesty’s Household, born January 10th., 1810, married, January 29th., 1850, Lady Olivia Montagu, only daughter of George, sixth Duke of Manchester. His Lordship had been summoned to the House of Lords, in the Barony of Ossulston, in May, 1859, before his accession to the Earldom of his father.