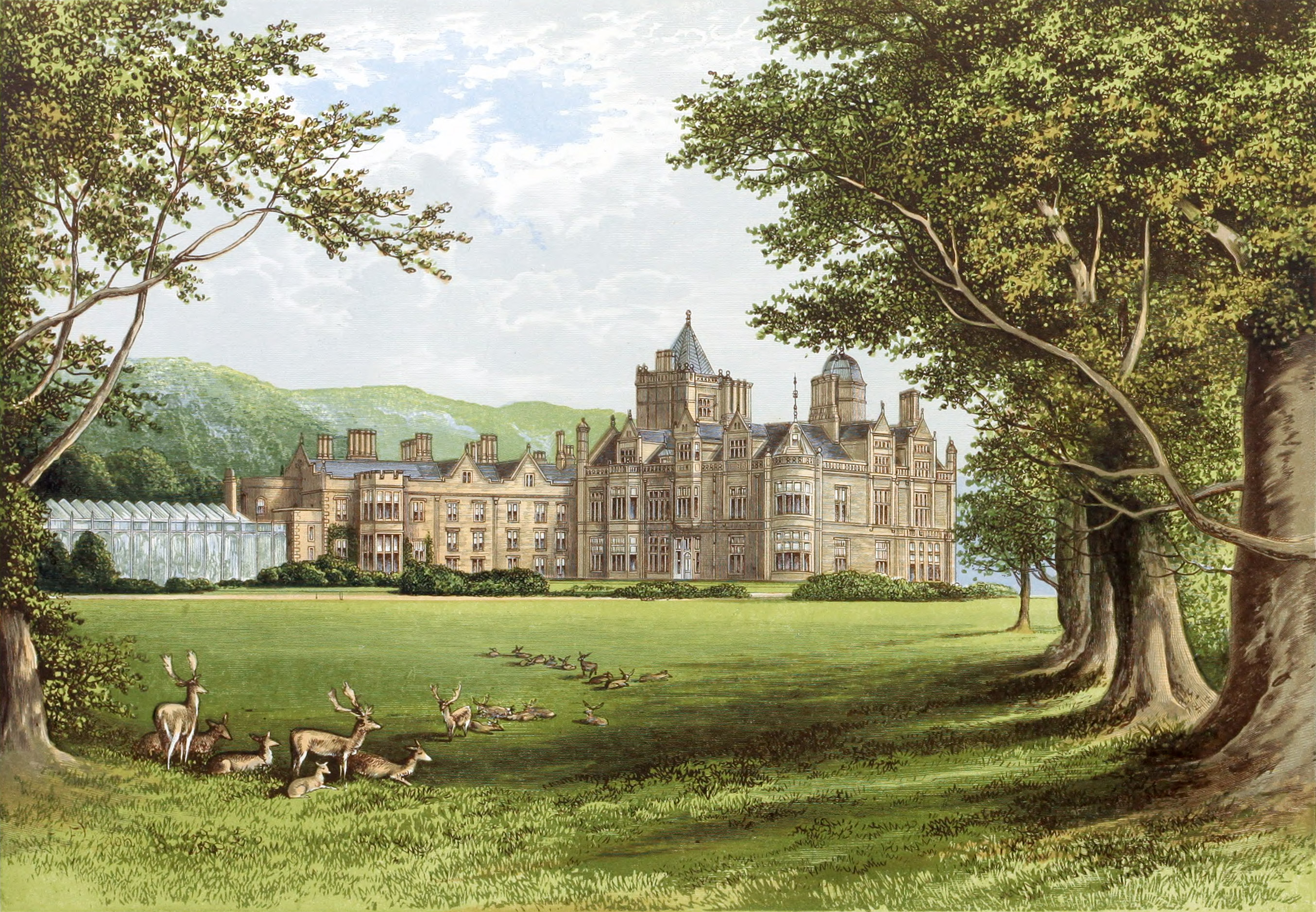 Near Cartmel, Lancashire.—Duke of Devonshire.

Holker Hall is finely situated in the midst of a park of very diversified scenery, comprising rocky eminences, from which many splendid views are obtained on all sides. It extends on the south and west to the sands of the river Leven.

The house has been altered and added to at different periods.

It contains a number of family portraits, by Sir Peter Lely, Sir Joshua Reynolds, etc., and a variety of other pictures by the most celebrated of the old masters, among them being works of Rubens, Van Dyck, Spagnoletti, Nicholas Poussin, Neefs, Wouvermans, Hobbima, Teniers, Zucharelli, and others.

The family of Cavendish, says Sir Bernard Burke in his “Peerage and Baronetage,” had the foundation of its greatness laid by sharing in the plunder of the abbey lands seized on by King Henry the Eighth.

In the fourteenth century lived

Sir John Cavendish, Chancellor of the University of Cambridge, who married Alice, daughter and heiress of John de Odyngseles. His younger son,

Sir John Cavendish, is stated to have been Esquire of the Body to Richard the Second, and his great great grandson,

Sir William Cavendish, K.B., inherited her three splendid estates, namely, Chatsworth, Hardwick, and Oldcotes, each of the mansions on them having been erected by her. He was raised to the Peerage as Baron Cavendish of Hardwicke, May 4th., 1605, and advanced to an Earldom as Earl of Devonshire, August 2nd., 1618. He married, first, Anne, daughter and coheiress of Henry Keigthley, Esq., of Keigthley, Yorkshire, and died, March 3rd., 1G25. His eldest son, the only one by his first wife, succeeded, namely,

William Cavendish, second Earl of Devonshire, who married Christina, daughter of Lord Bruce of Kinlosse, and at his death, in 1628, was followed by his eldest son,

William Cavendish, third Earl of Devonshire. He wedded Elizabeth, daughter of William Cecil, Earl of Salisbury, his son, and successor, in 1684, being

William Cavendish, fourth Earl of Devonshire, K.G., and Lord Steward of the Household, created, May 12th., 1694, Marquis of Hartington and Duke of Devonshire. He married Mary, second daughter of James, Duke of Ormonde. His Grace died August 18th., 1707, and was succeeded by his eldest son,

William Cavendish, second Duke of Devonshire, K.G. This nobleman married Rachel, daughter of William, Lord Russell, and had, with other issue,

William Cavendish, third Duke of Devonshire, Lord Steward of the Household in 1729, and Lord Lieutenant of Ireland 1737–1744, married, in 1718, to Catherine, only daughter and heiress of John Hoskins, Esq. He died December 5th., 1755, and was succeeded by his eldest son,

William Cavendish, K.G., fourth Duke of Devonshire, Lord Lieutenant of Ireland in 1755, born in 1720, who had been called to the House of Peers June 13th., 1751, in his father’s Barouy of Cavendish. He married, March 28th., 1748, Charlotte, Baroness Clifford, of Lanesborough, only daughter and heiress of Richard, Earl of Burlington and Cork, (by which union the Barony of Clifford, created by writ of Charles the First, in 1628, came into the family), and had, with other children,—he died October 2nd., 1764,—an eldest son,

William Spencer Cavendish, sixth Duke of Devonshire, K.G., K.S.A., K.A.N., D.C.L., P.C., Lord Lieutenant and Custos Rotulorum of Derbyshire, and High Steward of Derby, bora May 21st., 1790, and died, unmarried, January 17th., 1858, when the Barony of Clifford fell into abeyance between his sisters, the Countesses of Carlisle and Granville, and the Dukedom, with the other titles, devolved on his Grace’s cousin,

William Cavendish, Earl of Burlington, who succeeded as seventh Duke of Devonshire, K.G., P.C., F.R.S., D.C.L., Lord Lieutenant and Custos Rotulorum of the County of Derby, High Steward of Cambridge, Chancellor of the University of Cambridge, a Senator of the London University, Steward of the Hundred of Amounderness, in Lancashire, born April 27th., 1808, married, August 6th., 1829, Lady Blanche Georgiana Howard, daughter of George, sixth Earl of Carlisle, and had, with other children,