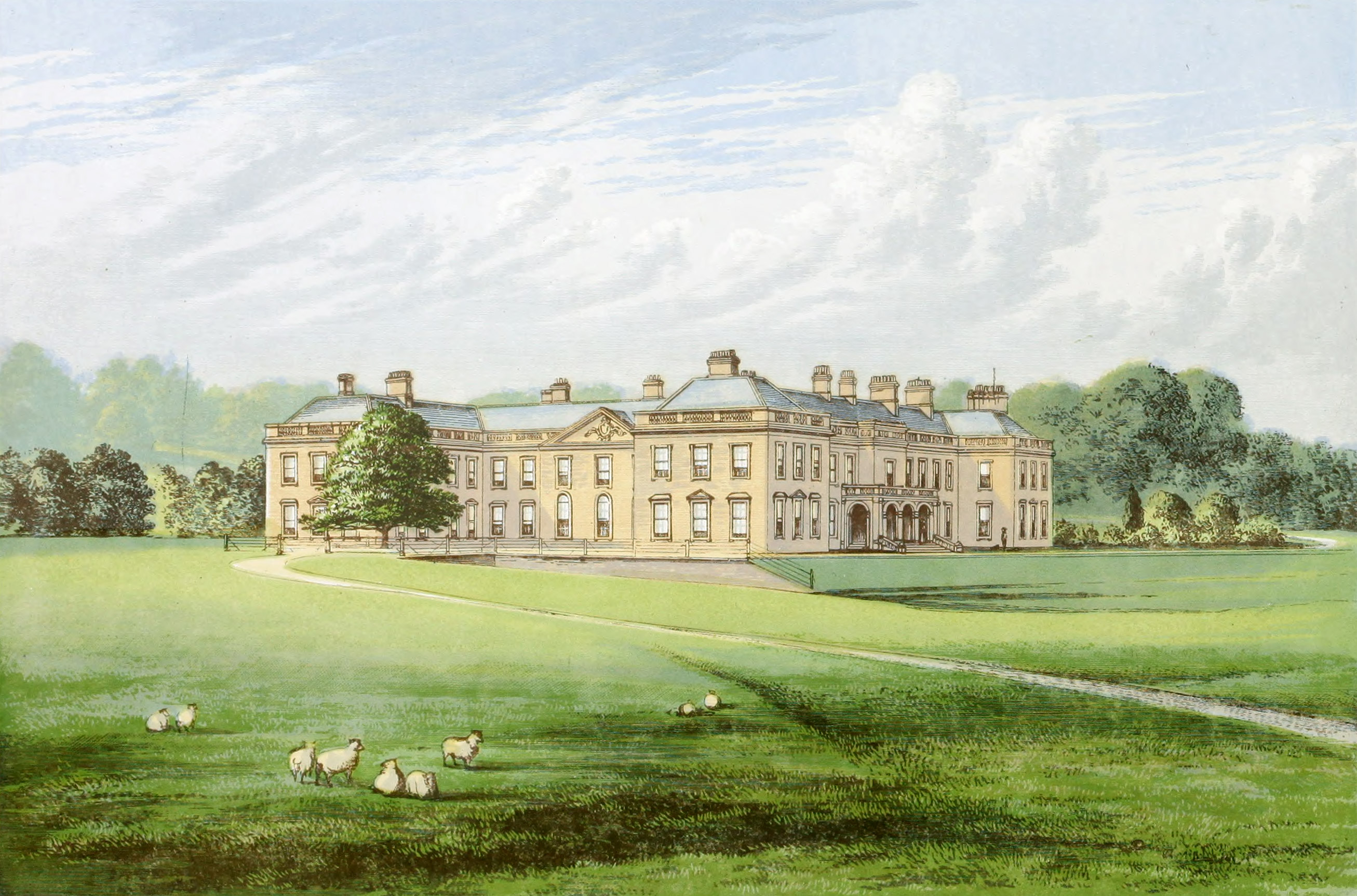 Many as are the seats in fair England, to each and every one of which the words of Spenser are so justly applicable,—

“There the most daintie paradise on ground
Itself doth offer to the sober eye,
In which all pleasures plenteously abound,
And none does others happiness envye.
The painted flowers; the trees upshooting hye;
The dales for shade; the hides for breathing space;
The trembling groves; the christall running by;
And that which all fair works doth most aggrace,
The art which all that wrought appeared in no place;”

there are few that surpass Holme Lacy in the exceeding beauty of its situation.

The name Holme is otherwise written Hamme, the Saxon word for a house, farm, or village; also, sometimes, Home, Horn, or Homme, meaning a place surrounded by water. The additional name of Lacy was derived to it from Walter de Lacy, a valiant Norman, who soon after the Conquest obtained vast possessions in the county of Hereford, so much so, that in the reign of William Rufus his son Roger had no fewer than sixty-five lordships in the county, of which the principal one was Holme.

So much for the place; now for the persons.

The ancient family of Scudamore was one of those whose names were inscribed on the Roll of Battle Abbey, and after living in high esteem in the county of Hereford for centuries,

John Scddamore, of Holme Lacy, was High Sheriff of the County in the 16th., 21st., and 35th. years of the reign of King Henry VIII. He married Sybil, daughter of Watkin Vaughan, of Hengist, lived to a great age, and was buried, with his wife, in the church of the parish, where there is a fine old monument of their two recumbent figures in alabaster.

The representative in the sixteenth century was

William Scudamore, who was Gentleman Usher to Queen Elizabeth, Standard-bearer to the Honourable Board of Gentlemen Pensioners, and one of Her Majesty’s Council for the Marches of Wales. He was Member of Parliament for the Shire in five successive Parliaments, and High Sheriff for the County in 1581. He was a great benefactor to the Bodleian Library at Oxford, and his son, Sir James Scudamore, was another of the chiefest friends of the justly celebrated Sir Thomas Bodley. Sir William was knighted for his signal bravery at the siege of Cadiz, and served in Parliament for the county of Hereford in the first year of the reign of King James I. He was one of the most renowned men in England for chivalry, and no more need be said of him than that he is the “Sir Scudamore” of Spenser’s “Faerie Queene.” He married Ursula, daughter and co-heiress of Sir John Pakington, of Westwood Park, in Worcestershire, and had issue,

1. John, of whom presently.

The younger son, Barnabas, was in the army of King Charles I., and Governor of

Hereford, which city he stoutly defended against the Scottish army under the Earl of Leven. He was twice summoned to surrender, but the following letter was his spirited reply:—

“I am not to give up the King’s garrison upon any summons or letter; neither shall it be in the power of the Mayor or other to condescend to any such proposition made unto him. I was set in here by the King’s command, and shall not quit it but by special order from His Majesty or the Prince; and with this resolution I shall persist in Hereford.

His refusal prolonged the siege for another fortnight, but the city gallantly held out, and at the end of that time a second and similar demand was sent by the Earl, to which the knight replied as follows:—

“For your favourable proffer to the inhabitants of this city, I shall returne their thankes, and resolution that they intend to suffer with me, and I shall not suffer alone for the suffusion of bloud. I am sorry to think of it, that two united nations should so much differ, having paid once well for Scotland’s friendship. My Lord, I am resolved to endure all ruines and stormes which shall be made against this place, and doubt not, by God’s assistance, to render His Majestie a good account of it; the which by my endeavours I shall maintain to the last, and remaine

“Your Lordship’s Servant,
“Barnabas Scudamore.”
“To the Right Honourable the Earl of Leven, General of the Scottish Forces.”

In consequence of this firm conduct, a general assault was determined on by the besiegers, but on the appearance of the king from Worcester, with a superior force, the Scots suddenly broke up, and dispersed. It appears, from the “Iter Carolinum,” that the king thereupon supped and slept at Holme Lacy.

John Scudamore, was created a Baronet in 1620, in which year he was elected Member for the County, and in 1628 was raised to the dignity of Baron of Dromore and Viscount Scudamore of Sligo, in the Peerage of Ireland. In 1634 he was sent Ambassador to the Court of France, in which office he acquitted himself with great dignity and discretion.

After three more generations the male line ended, when the titles of Baronet, Baron, and Viscount became extinct, and the estates devolved upon

The original mansion of Holme Lacy is supposed to have been built by John Scudamore, Esq., at the latter end of the reign of Henry VIII., the letters E P, with the badges of the Prince of Wales, afterwards King Edward VI., in painted glass, being found in the old house. It was partly rebuilt in the reign of William III., by John, Viscount Scudamore, but has only recently been completed.

“The house presents an uniform structure, nearly in the shape of the letter H, having three fronts of stone, with projecting wings. The north and east fronts are nearly two hundred feet in length, and. the south front one hundred and fifty feet. The house is approached by a noble terrace, seven hundred feet long, and forty-seven feet wide. The entrance-hall opens upon a gallery ninety feet in length, and is lighted by five windows of stained glass, in which are the arms of Brydges, Scudamore, and Stanhope. At the further end of the gallery, folding doors open upon the principal staircase, lighted by a large window of painted glass, in which are the arms of King Henry VIII. and Edward, Prince of Wales. On the left side of the gallery, doors open into the principal apartments, which are lofty and well proportioned, having richly stuccoed ceilings in compartments of flowers and various other designs, especially the saloon, a room of spacious dimensions, thirty-one feet in height, the ceiling of which is of most beautiful design, having pendant festoons of fruit and flowers; also some fine carving by Grinling Gibbons, over the chimney-piece. In this room and the dining-room adjoining are some fine family portraits by Vandyke, Sir Peter Lely, and others. The whole of the rooms on the ground-floor are of good proportion, and communicate with one another by folding doors, to the length of one hundred and thirty feet, and other rooms on the right and left. In these rooms are some exquisite specimens of carving by the celebrated Grinling Gibbons, in bird, shell-fish, fruit, flowers, etc.

The gardens and pleasure-grounds of Holme Lacy are extensive and unique, particularly those on the south side, which are laid out in King William’s style of fortification, with magnificent yew hedges of extraordinary height and thickness. The flower-garden, which is modern, is extremely beautiful. On the south side is also a terrace, eight hundred feet in length by thirty feet wide, communicating with other terraces and walks of lesser extent.

Pope, Gay, and other literati of that day, were much at Holme Lacy during the time of the last Lady Scudamore, and often spent their summers with that lady. It was at Holme Lacy Pope became acquainted with John Kyrle, whom he has celebrated under the title of “The Man of Ross,” a poem he wrote at Holme Lacy.

In the garden of the Vicarage-house at Holme Lacy is a remarkable pear tree, which formerly covered nearly an acre of ground; much of it has, however, been cut down from time to time, owing to its too closely surrounding the house. From fourteen to sixteen hogsheads of perry, of one hundred gallons each, have been made from this tree in one year. In its growth, it in some sort resembles the growth of the banyan tree.

The scenery around Holme Lacy is highly picturesque, and replete with endless variety. The view from the east end of the south terrace is surpassingly beautiful. The old tower of Holme Lacy church, with the spire of Fownhope on the right, the hills of Fownhope, richly wooded from the summit to the base; Caplar Hill, on the top of which are the remains of a Roman camp, with the Wye running at its base, form altogether a landscape rarely equalled. The scene is again charmingly varied as you ascend the park, (well stocked with deer,) which takes in other agreeable objects, and more of the Wye’s meandering river. Still further on the distant view expands nobly, whilst the huge and magnificent oaks, those venerable giants of the forests, spread their umbrageous arms everywhere around. From the summit of this beautiful park you command the Black Mountains, in Brecknockshire; the Clee Hills, in Shropshire; the celebrated Malvern Hills, in Worcestershire; and the well-known hills called “Robin Hood’s Butts.”

Although there are, doubtless, many seats more important from historical recollections and associations, few surpass Holme Lacy in beauty of situation and surrounding scenery.”