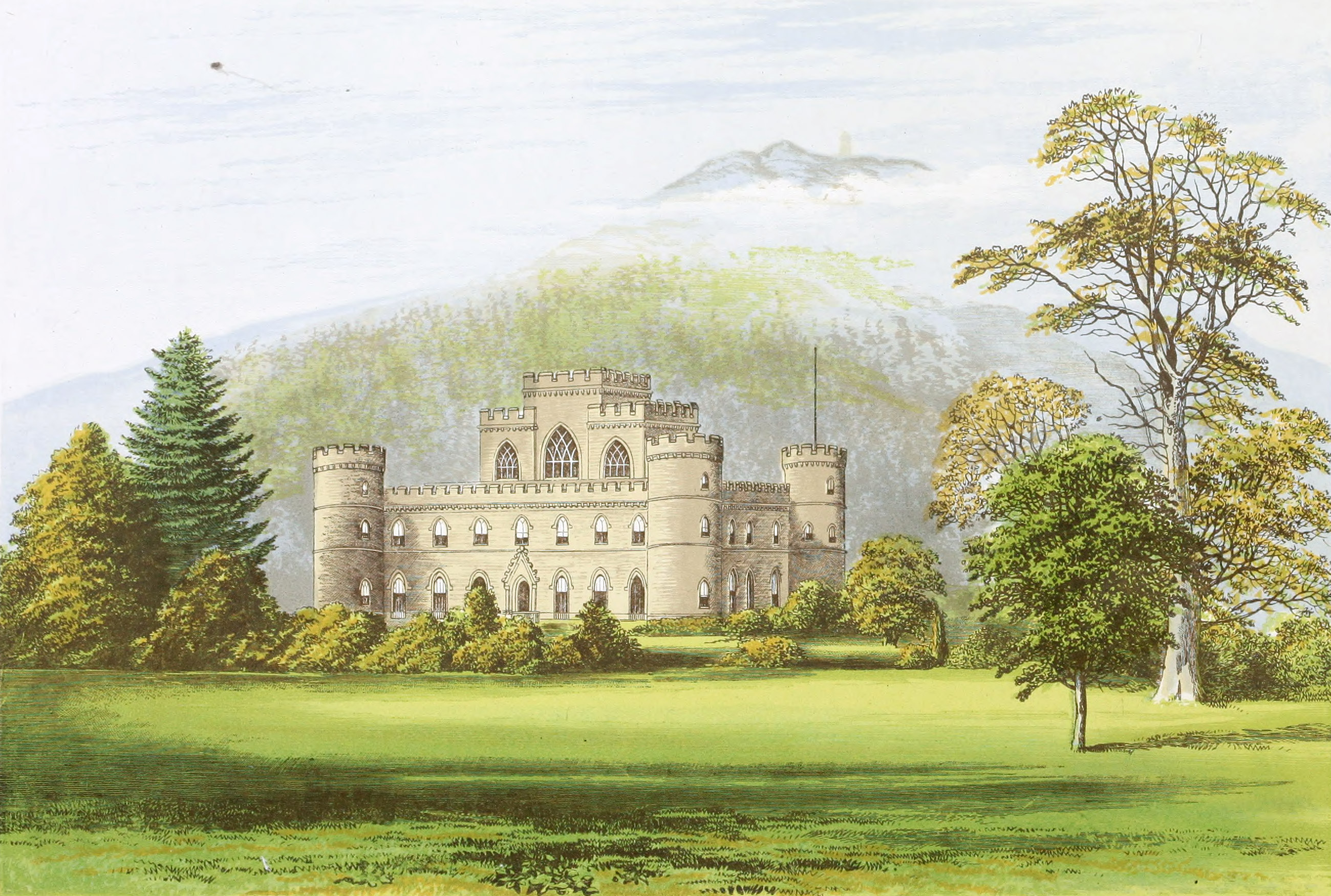 Near Inverary, Argyllshire.—Duke of Argyll.

It is nothing new to say that most of the persons who travel to foreign lands “in search of the sublime,’ have left still more beautiful scenery in their native land than much they see abroad, and are utterly ignorant of the mountains, valleys, hills, woodlands, plains, lakes, streams, and rivers, which adorn each of the three kingdoms of the British Islands. It is the old story over again of the substance being left for the shadow in many such cases. Inverary Castle offers a notable instance of this, standing in a situation of extreme beauty and grandeur, in the midst of a wide open space, surrounded by lofty hills which are covered with wood, and having in front Lough Fine, a deep amphitheatre of water, indented on all sides of its shores with a succession and variety of promontories.

Immediately behind the house the hill of Dunicoick rises almost perpendicularly to the height of seven hundred and fifty feet, nearly covered with wood, through which are seen the projecting rocks of its native foundation and formation. It needs hardly to be added that the wide and extensive view from its summit is one of surpassing beauty, nature supplying in such abundance the materials to which art has added all that art can add. The plantations which adorn and diversify the scenery were begun by the then Marquis of Argyll in the reign of Charles the First, and his plans have been continued by his descendants ever since. The late Duke is stated to have devoted £3,000 a year to the improvement of the seat, feeling, as each successive proprietor of an estate should feel, that he is but a steward for those who come after him, and that thus he can best also benefit the present race of tenantry, who all have their own natural claims upon him as well.

The park is extensive, graced with trees of ancient growth, and watered by the River Aray, a rapid stream, crossed by a bridge in one part, and afterwards falling into the above-named lake or arm of the sea.

The entrance hall is fitted up as an armoury, with a collection of the various weapons in use, or rather that were formerly in use by the Highlanders,—

“An old hall hung about with pikes, guns, and bows,
With old swords, and bucklers that had borne many shrewde blows.”

Above it is a gallery in which an organ is placed.

The great drawing-room is a splendid apartment, hung with tapestry, and ornamented in a most superb manner.

The turrets of the building are fitted up as small libraries or private rooms.

Mary Queen of Scots paid a visit to Inverary Castle in 1563.

“’45,” a time not favourable for building or the quiet arts of peace, and its completion was thus retarded for a time. The old building was taken down in the year 1770.

The portraits, as may be supposed, are numerous and interesting, among them being one of the unfortunate Marquis of Argyll who was beheaded May 27th., 1661. Also his son Archibald, the ninth Marquis, who was beheaded at the Cross of Edinburgh, June 30th., 1685. Others of a late Duke of Argyll, by Gainsborough; Lord Frederick Campbell, by Gainsborough; Douglas, sixth Duke of Hamilton, by Battoni; several landscapes representing views in the neighbourhood, by Nasmyth and Williams; some fine drawings by De Croc, and a numerous collection of prints by the best masters.

The family of the Duke of Argyll derives from Gillespick Campbell, living in the beginning of the thirteenth century.