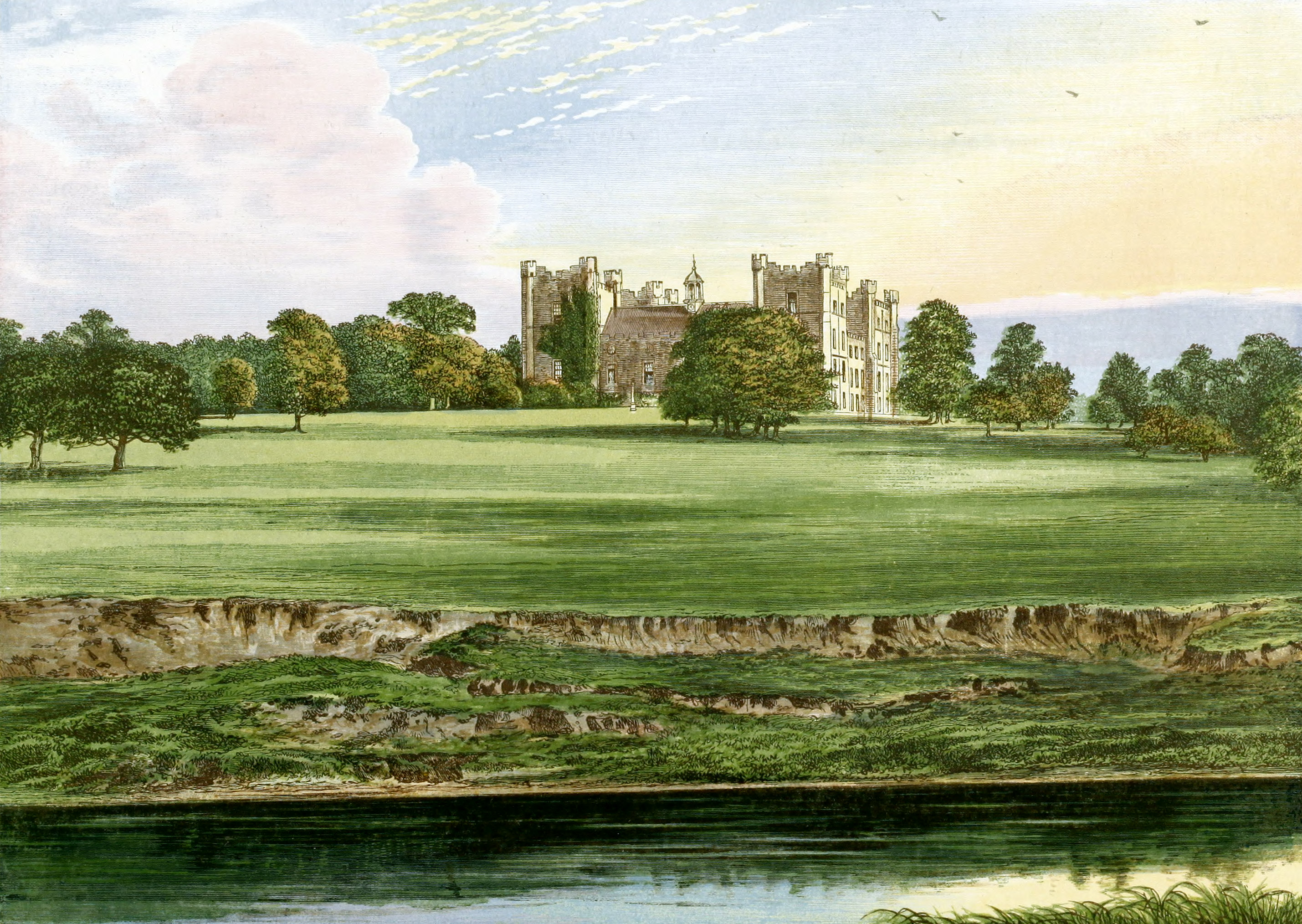 Near Chester-le-Street, Durham.—Earl of Scarborough.

I have already stated in a previous volume of this work that Sir Bernard Burke had obligingly given me leave to make whatever use I pleased of his valuable collections as published by him, and the following account is accordingly made use of from his:—

“This castle stands on a fine eminence bounded upon the north by Lumley beck, or brook, and rising gradually on the east and west sides from the river Wear. The east front, one hundred and seventy-five feet long, is close upon the brow of a deep, well-wooded ravine, a terrace only intervening between the castle and the dell, through which the Lumley beck winds its way to the river just mentioned. At one time this terrace was guarded by a curtain-wall.

The chief entrance to the castle is at the west front, by a double flight of steps, leading to a broad and lofty platform, commanding a splendid prospect. It occupies the centre span between the towers—an extent of ninety-four feet. The whole front is no less than one hundred and seventy-five feet. Over the centre of the gateway are two small escutcheons, the dexter charged with a fleur-de-lis, and the sinister with a rose. From these depend two long strings of armorial shields, nine from the lily, and as many from the rose, including all the matches in the family from Linulph to John, Lord Lumley. On the flanking or projecting towers, upon each side of this armorial gateway, are two tablets of black marble, one inscribed with the family motto, Murus æneus conscientia sana; the other inscription is effaced; beneath are two marble fountains. Three stages of masonry rise above each other, their mullioned windows heavily barred with iron, and a noble gatehouse projects from the centre of this part of the building, guarded by overhanging turrets, and a machiolated gallery. Above the gate are six shields with armorial bearings, three and three, deeply carved in stone with their crests; the date of its alteration by Sir Ralph Lumley was in the reign of Bichard II., when he obtained licence from the king (in 1389) as well as from Bishop Skirlaw, to repair his castle, build a wall with mortar and stone, and strengthen the former structure. It would seem that the original fabric had been erected by Sir Robert Lumley in the time of Edward L, and enlarged by his son. Sir Marmaduke.”

This ancient family derives its origin from

Osbert de Lumley, whose son was

Liulph, a nobleman living in the reign of Edward the Confessor, who was murdered by one Leoferiso, apparently a foreigner, from his name. Chaplain to Walcher, Bishop of Durham, both of whom were soon after murdered themselves by the populace. He married Algitha, daughter of Alfred, Earl of Northumberland, and their eldest son succeeded as

Ughtred de Lumley, After him came the following long line of descendants, whose names only my limited space enables me to give.

Sir Ralph de Lumley, summoned to Parliament from 1384 to 1399. He was, however, attainted for joining in the rebellion of Thomas de Holland, Earl of Kent, and died on the field of battle. His brother.

Thomas de Lumley, Lord Lumley, who was granted by Parliament a reversal of the attainder of his grandfather. His grandson,

Richard, Lord Lumley, was summoned to Parliament in 1509. His eldest son,

John, Lord Lumley, had an only son,

George, Lord Lumley, implicated in the treason of Lord Darcy, was committed to the Tower and executed. His grandson,

John, Lord Lumley, was restored to the forfeited title by an Act of Parliament passed in 1547. His kinsman.

Sir Richard Lumley, was elevated to the Peerage of Ireland, as Viscount Lumley, of Waterford, July 12th., 1628. He was followed by his grandson,

Richard Lumley, second Viscount Lumley, raised to the Peerage of England May, 31st., 1681, as Baron Lumley, of Lumley Castle, and created, April 10th., 1689, Viscount Lumley and Earl of Scarborough. His eldest son was

Richard Lumley, second Earl of Scarborough, K.G., at whose decease, unmarried, in 1740, the honours devolved on his brother,

Thomas Lumley, third Earl, K.G., who had assumed the additional name of Saunderson, by Act of Parliament in 1723, on inheriting the estates of James Saunderson, Earl of Castleton, in Ireland. He died in 1752, and was succeeded by

George Augusta Lumley, fifth Earl, was followed by his brother,

Richard Lumley, sixth Earl, and he by his next brother.

The Rev. John Lumley, seventh Earl, Prebendary of York, who assumed the additional surname of Savile, and whose second surviving son,

Richard George Lumley, ninth Earl of Scarborough, who had, with other issue, a second surviving son,