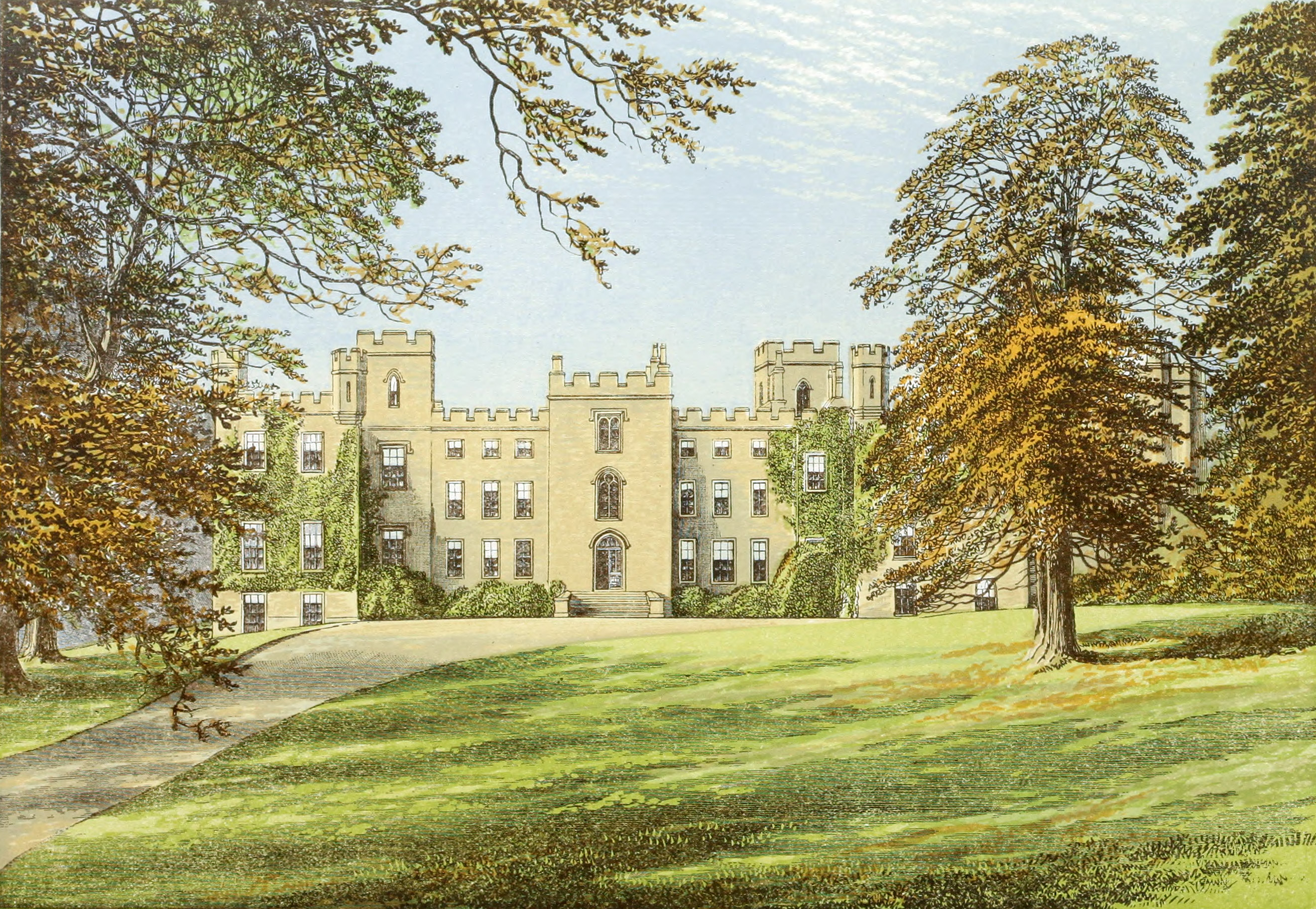 Near Whitby, Yorkshire.—Marquis of Normanby.

The situation of Mulgrave Castle is extremely fine, commanding a magnificent view of the German Ocean, on which one looks through precipitous banks in the grounds, as if on a picture set in a frame.

In the times of old it was a fortress of a Saxon Duke, by name

Wada, whom tradition has handed down as a giant.

In subsequent Norman times the castle and barony were granted to

Nigel Fossard, from whose family it was next conveyed by the marriage of the heiress with

Sir Robert de Turnham, in the reign of Richard the Lion-hearted. He dying without a male heir, his daughter,

Isabella de Turnham, having become, by the death of her father, a ward of the crown, was given in marriage by King John to

Peter de Malo Lacu, otherwise called Peter de Mauley, a native of Poictou, and esquire to the king, who had engaged him to assassinate Prince Arthur, to clear the way for his own accession to the throne.

To this Peter, succeeded, according to Camden, seven others of the same Christian name in succession, until the reign of Henry the Fifth, when the estates were conveyed by an heiress into the family of

Bigod, and next, by another, into that of

Subsequently, namely, about the year 1625, the property went into the hands of Edmund, Lord Sheffield of Butterwick, Lord President of the North, who, in the reign of Elizabeth, had greatly distinguished himself by many gallant actions, and more particularly in assisting towards the defeat of the Spanish Armada. He was created by King Charles

Earl of Mulgrave, but the family became extinct in 1735. The title was, however, again revived in the person of

Constantine Phipps, whose grandmother on the mother’s side, Catherine, Dowager Countess of Anglesey, had re-married, secondly, John Sheffield, Duke of Buckingham, and by his bequest had succeeded to the Mulgrave and other estates. The son of the above,

Constantine John Phipps, the second Lord, distinguished himself as an arctic voyager, by reaching to a far higher latitude than any of his predecessors.

Jet is found in the neighbouring cliffs between Mulgrave and Whitby, of which Solinus quaintly says, “In Britain there is a great store of gagates, or jet, a very fine stone. If you ask the colour, it is black and shining; if the quality, it is exceeding light; if the nature, it burns in water, and is quenched with oil; if the virtue, it has an attractive power when heated with rubbing.”

The family of Lord Normanby derives from Sir William Phipps, who received the honour of knighthood from King James the Second. He was a distinguished mathematician, and the inventor of the diving bell, by means of which he was successful in recovering an immense treasure from the wreck of a Spanish galleon. He was afterwards appointed Governor of Massachusetts.