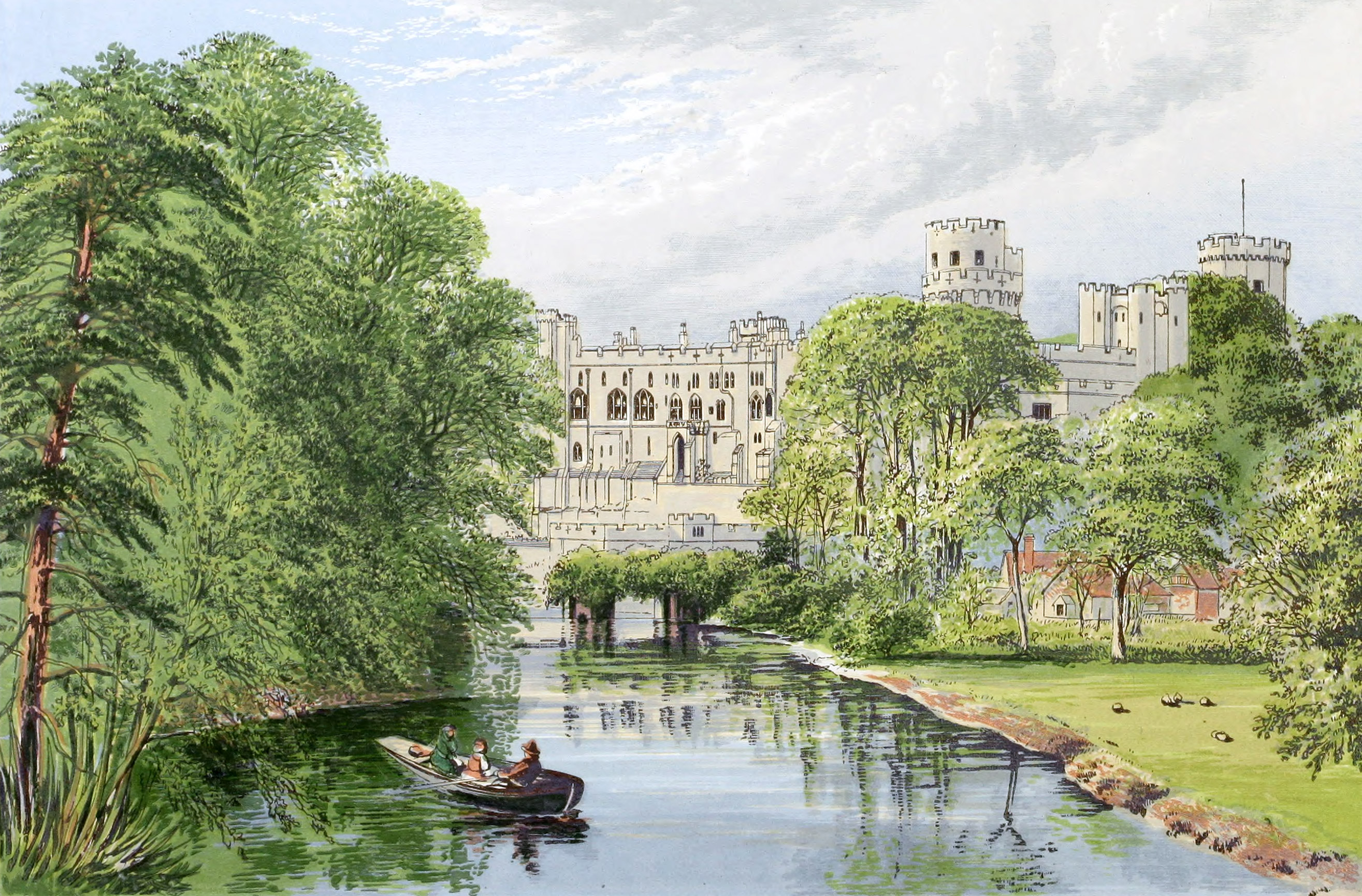 Near Warwick, Warwickshire.—Earl of Warwick.

Cymbeline, King of Britain, is by some supposed to have built the first stronghold that existed on the site of the grand and historic pile of Warwick Castle.

The Romans have had its original foundation assigned to them by others.

Ethelfleda, a daughter of Alfred the Great, is yet again considered by other antiquarians to have been the foundress of the first Castle that was built here, but however that may be, it seems to be understood that in the year 915 she caused the donjon to be made, which was a strong tower or platform upon a large and high mound of earth, artificially raised—such being usually placed towards the side of a castle or fort which is least defensible.

William the Conqueror bestowed the place upon one of his followers, named

Henry de Newburgh, whom he at the same time created Earl of Warwick. It next passed to one of the family of

Beauchamp. The last female heir of that line conveyed it by her marriage to the celebrated

Richard Neville, the “King Maker/’ who assumed the title of Earl of Warwick. Upon his decease, his daughter having married the Duke of Clarence, the latter was allowed by the King, Edward IV., to take the vacant dignity. The Castle was much strengthened and ornamented by him, but upon his forfeiture it was granted to the family of

Dudley, during whose possession of the seat it was visited by Queen Elizabeth in one of her “progresses,” and the following somewhat characteristic story relative to the event is related of Her Majesty:

“The bailief, rising out of the place where he knelid, approchid nere to the coche or chariott wherein her Maiestie satt, and coming to the side thereof, kneling downe, offered unto her Maiestie a purse very faire vrought, and in the purse twenty pounds, all in sovereignes, which her Maiestie putting furth her hand reccvid, showing withall a very benign and gracious countenance.” “And therewithall offered her hand to the bailief to kisse, who kissed it, and then she deliverid to him agayne his mase, which she kept on her lappe all the tyme of the oracyon. And after the mase deliverid, she called Mr. Aglionby to her, and offered her hand to him to kisse, withall smyling said, ‘Come hither, little recorder; it was told me that youe wold be afraid to look upon me or to speake boldly; but youe were not so afraid of me as I was of youe.’”

On the failure of the line of Dudley, the earldom was bestowed by King James on

Robert, Lord Rich, but the castle he gave to

Lord Brooke, was a rigid Parliamentarian, and fortified his castle on their behalf; but, advancing upon Lichfield, which was held by a strong force of Royalists for the

King, he was shot dead by a soldier from a wall. His descendant,

Francis Greville, was created Earl of Warwick in 1747, and was ancestor of the

of the town. The road is cut through a solid rock, overgrown with moss and ivy, and crowned with trees and shrubs of various kinds, winding along for nearly a quarter of a mile, when the noble building breaks at once upon the sight in all its magnificence. On the right hand is Guy’s Tower, the walls of which are ten feet thick, and one hundred and twenty-eight feet high. Upon the left is a pile called Cæsar’s Tower, connected with the former by a strong wall, in the centre of which is a ponderous gateway with a portcullis, leading to the inner court.

The entrance-hall is sixty feet long and forty feet broad, reaching to the very roof of the castle. Its walls are characteristically covered with ancient armour—swords, shields, helmets, spears, and the like—strongly recalling the idea of olden times. Adjoining the hall is a dining-room, more modern than any other part of the building. Beyond this again, is a magnificent suite of state apartments, consisting of two state drawing-rooms and a boudoir, and other apartments.

The walls are adorned with a series of valuable paintings by the old masters, among which are the famous paintings of Charles the First on horseback by Vandyke, and the portrait of Ignatius Loyola by Rubens.

In the greenhouse is the celebrated “Warwick Vase” of white marble, twenty-one feet in circumference, and seven in diameter, discovered in the baths of the Emperor Adrian, presented by the Queen of Naples to Sir William Hamilton, who gave it to the Earl of Warwick.

There is also the magnificent “Kenilworth Buffet,” presented to Lord Brooke on his marriage by his friends in the county, of which it was to be a memorial heir-loom in the castle.

The family of Greville descends from William Greville, a citizen of London, living in the year 1397.