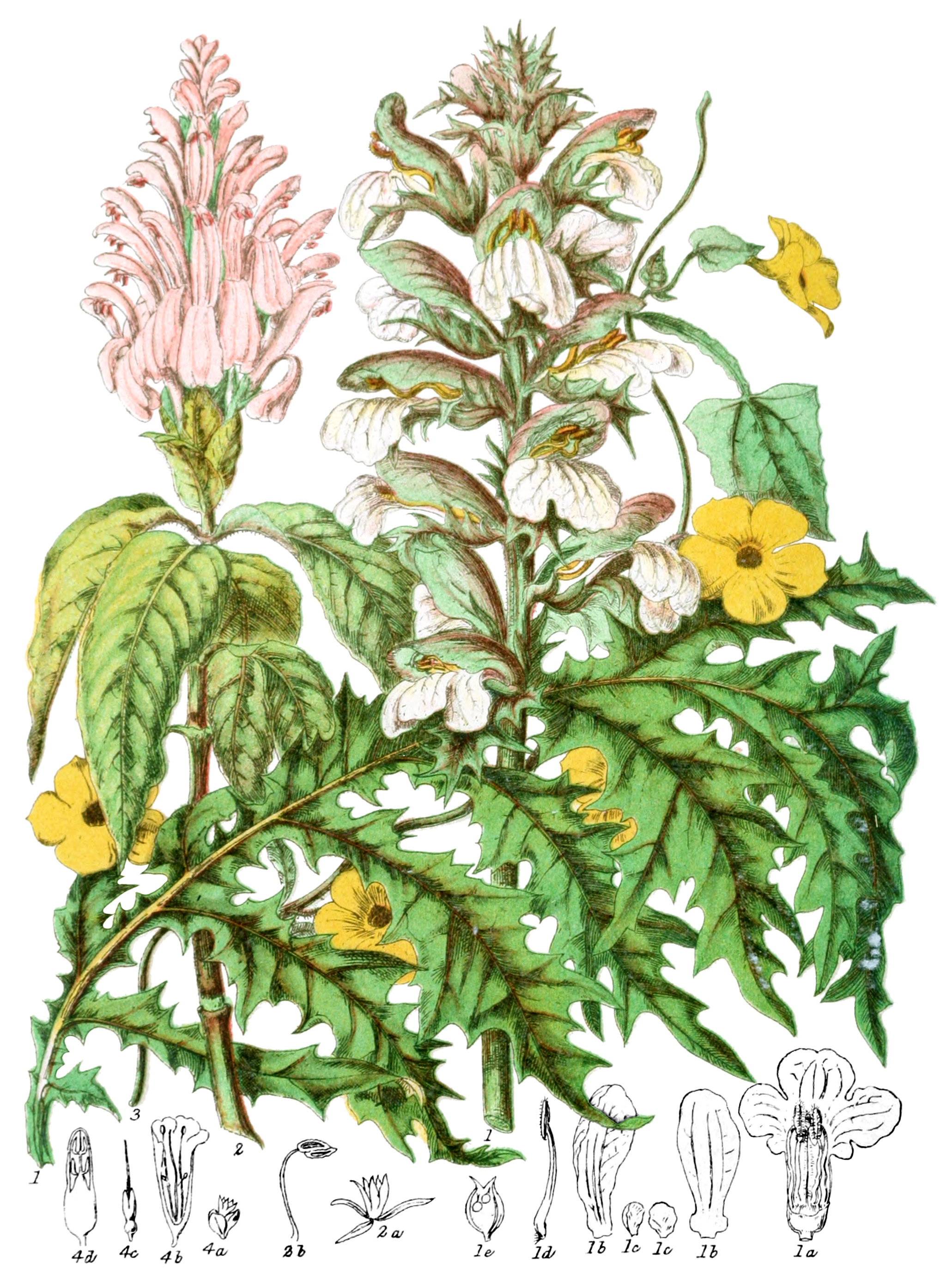 Shrubs and herbaceous plants, sometimes having simple hairs, very rarely in a stellate form. The leaves are opposite, rarely in fours, or unequal pairs, without stipules, simple entire at the edges, or serrated, sometimes sinuated, or lobed, and spiny. The flowers are terminal, or from the base of the leaf-stalks, in spikes, or branching panicles, sometimes solitary; opposite or alternate on the branches. At their base are three bracts; the central one usually large and leafy, and spiny if the leaves are so, enclosing the calyx, or forming a substitute for it. The calyx is four or five-lobed, equal, or unequal, the two side sepals very small in Acanthus, generally much imbricated and divided, sometimes entire, persistent, occasionally wanting as in Thunbergia. The corolla is of one petal, attached below the ovary, two-lipped, the lower lip overlapping the upper in the bud; occasionally one-lipped, as in Acanthus, sometimes nearly equal, deciduous. The stamens are usually two, both having anthers, sometimes four, the two longer only being fertile; the anthers are two or one-celled, opening lengthwise. The ovary is seated on a disk, two-celled, composed of two carpels, with one style, and a two-lobed stigma. The capsule is two-celled, the cells two or many-seeded, bursting elastically, with two valves which bear seeds on their edges. The seed are roundish, suspended by hard, cup-shaped, or hooked projections from the plats of the valves; they contain no albumen.

This Tribe has affinity with Bignoniaceæ, and Scrophulariaceæ, but is distinguished from the former by wingless seeds, and from both by the large leafy bracts, and the hooked processes attaching the seeds.

Mucilaginous and slightly bitter properties exist in these plants.

This Tribe is chiefly Tropical, abounding especially in the Tropics of Africa and America. A few species only inhabit the United States of America. Acanthus extends northwards into Greece.