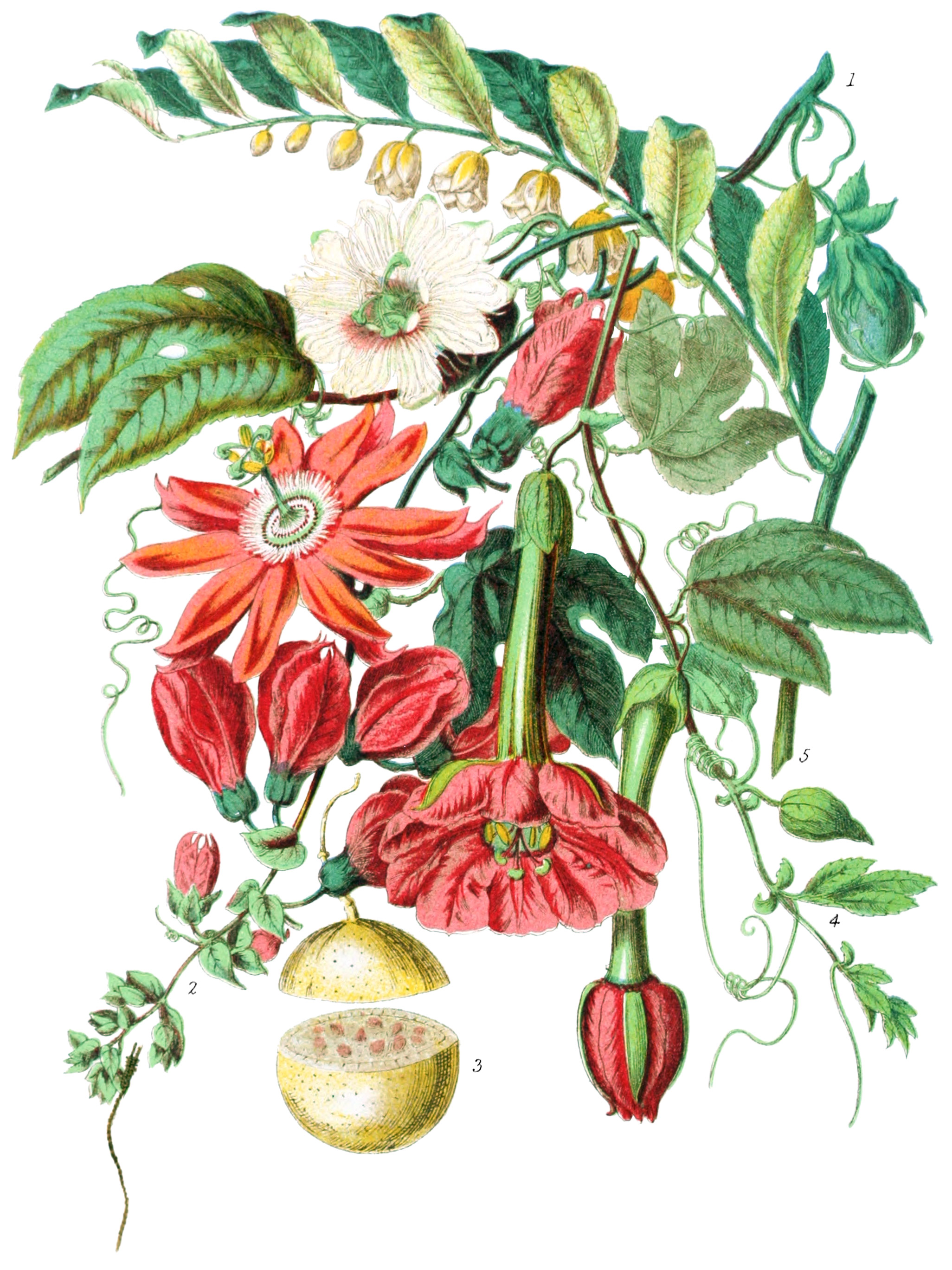 Herbaceous plants or shrubs, usually of a climbing habit, very seldom erect. The leaves are alternate, with foliaceous stipules, the leaf-stalks usually having glands. The flowers grow either from the base of the leaf-stalk, or at the ends of the branches; they often have a three-leaved involucre immediately beneath them, which falls off before the flower expands. The calyx has generally five sepals, sometimes of irregular form, the inner surface usually coloured, and formed in appearance a part of the flower itself; the lower part is combined into a tube of variable length, the sides of which are lined by slender filaments. The petals are five, arising from the summit of the tube of the calyx outside the filaments; they are sometimes irregular, and sometimes wanting; in the bud state they are folded one over the other. The stamens are five, united in one set, rarely more, surrounding the stalk of the ovary; the anthers are linear, turned outwards, and bursting horizontally in two cells. The ovary is at the top fo a long stalk, and contains one cell; three styles with spreading stigmas arise from the point. The fruit is stalked, oval, containing many seeds attached to the interior by small stalks, and surrounded by a pulpy covering.

The most singular feature of this remarkable order is the filamentous coronet of rays encircling the orifice of the tubular calyx; these annular appendages appear to be of an intermediate nature, between petals and stamens.

Smeathmannia forms a connecting link with Samydaceæ, and some resemblances exist with the gourd, the caper, and the violet tribes.

Although many of these plants have wholesome fruit, yet some possess rather dangerous qualities.

The chief station of this Tribe is South America, where the woods abound with various species; many are also found in the West Indies. One or two extend northwards in North America; several grow in Africa, and the neighbouring islands; a few have been found natives of the East Indies; Passiflora Lechanaultii on the Neelgherries, and P. Nepalensis in Nepal. One species of Passiflora extends to New Zealand. Disemma prevails in New Holland. Tacsonia seems to be confined to South America. Modecca belongs to the East Indies, Java, and the northern coast of New Holland.