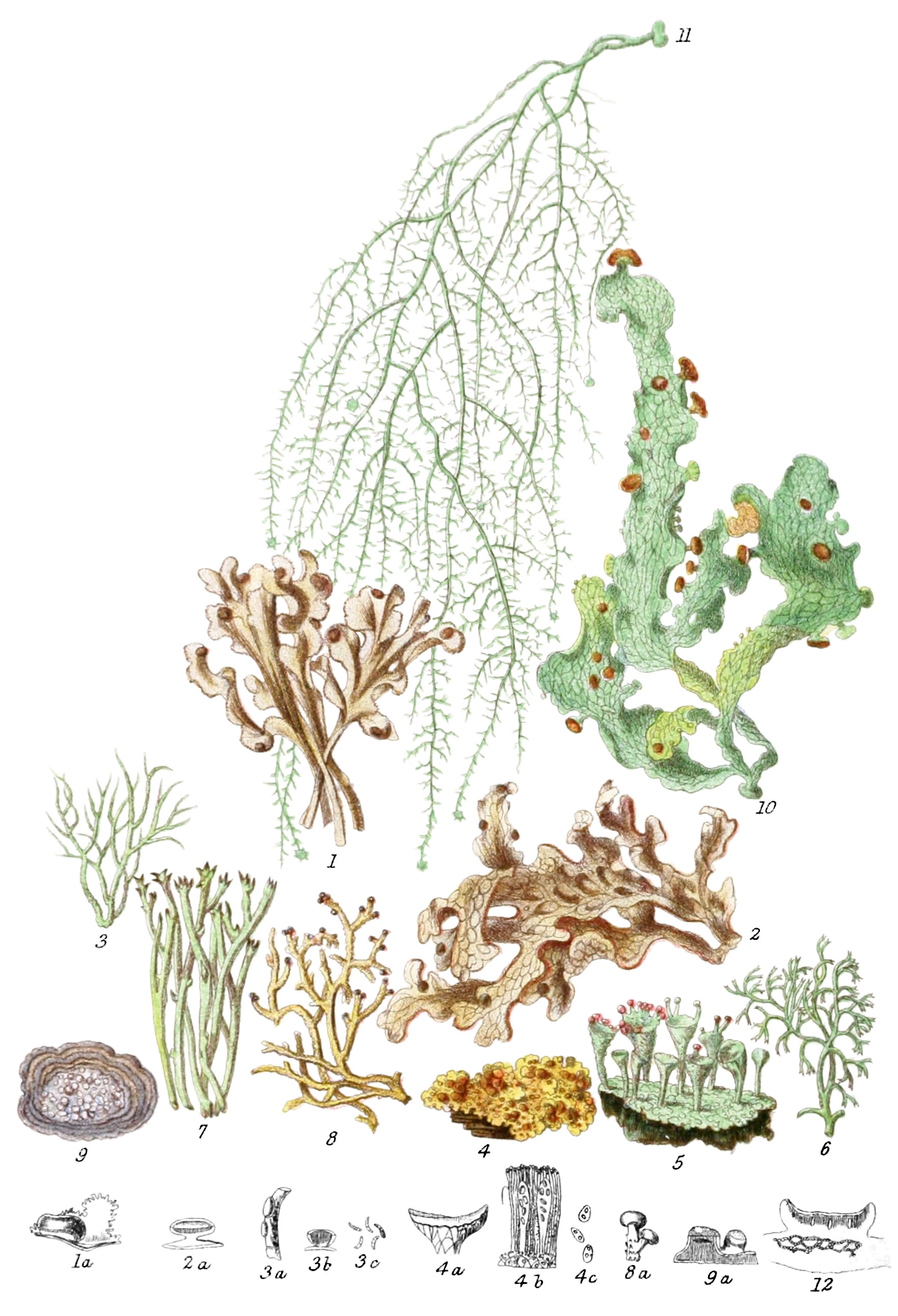 Perennial flowerless plants, of cellular tissue, forming a shallus, often spreading over the surface of the earth, or on rocks or trees, or usually in dry places; of a leafy or lobed form, or hard and crustaceous, or of a mealy substance. The shallus is composed of two layers, the outer one simply cellular, the inner one cellular and filamentous. In the crustaceous species the outer layer alone contains colouring matter. The reproductive organs are of two kins, either spores lying in small shields which burst the outer layers and expand on the surface, or separated green cells of the inner layer called gonidia (12), which remain beneath the outer later or break out in clusters or in cups. The plants are developed in humidity, then become a dry powdery crust out of which grow the living vegetating cells filled with reproductive matter.

This Tribe has close affinity with the sea-weed and the fungus tribes, having in many instances the growth of a sea-weed, and the fructification of a fungus.

These plants are mucilaginous and contain medicinal and nutritive properties. Lichens are the first agents of nature in the work of forming vegetable earth. The most simple powdery, almost invisible species are developed on volcanic ground and rocks, in decomposing the surface of which they add to the soil, and other lichens are thus enabled to find support for their slender roots. To these succeed mosses, and afterwards larger plants. Thus through successive years the work proceeds, till barren rocks rising out of the ocean, coral reefs, and pumice plains around volcanoes, became converted into fertile land. The old name of time-stains is admirably expressive, they are the gradual produce of time, clothing aged trees, ancient edifices and ruins, and giving the peculiar hoary aspect to some rocks. The pale hue of the granite on the coast of Cornwall at the Land’s End is entirely owing to the lichens which cover the surface.

The north side of trees or rocks is usually most favourable to these plants. The scorching rays of the sun parch them; they are never found on decaying matter, sometimes on evergreen leaves in the Tropics. Those which grow on the top of firs have been found to contain a large proportion of oxide and iron. Lichens have not been discovered in a fossil state.

This Tribe is scattered over the whole world, many species grow equally in various countries. The finest examples are found near the Equator, the smaller crustaceous species in the Polar regions, or on lofty mountains, scarcely discernible from the rocks to which they are attached.