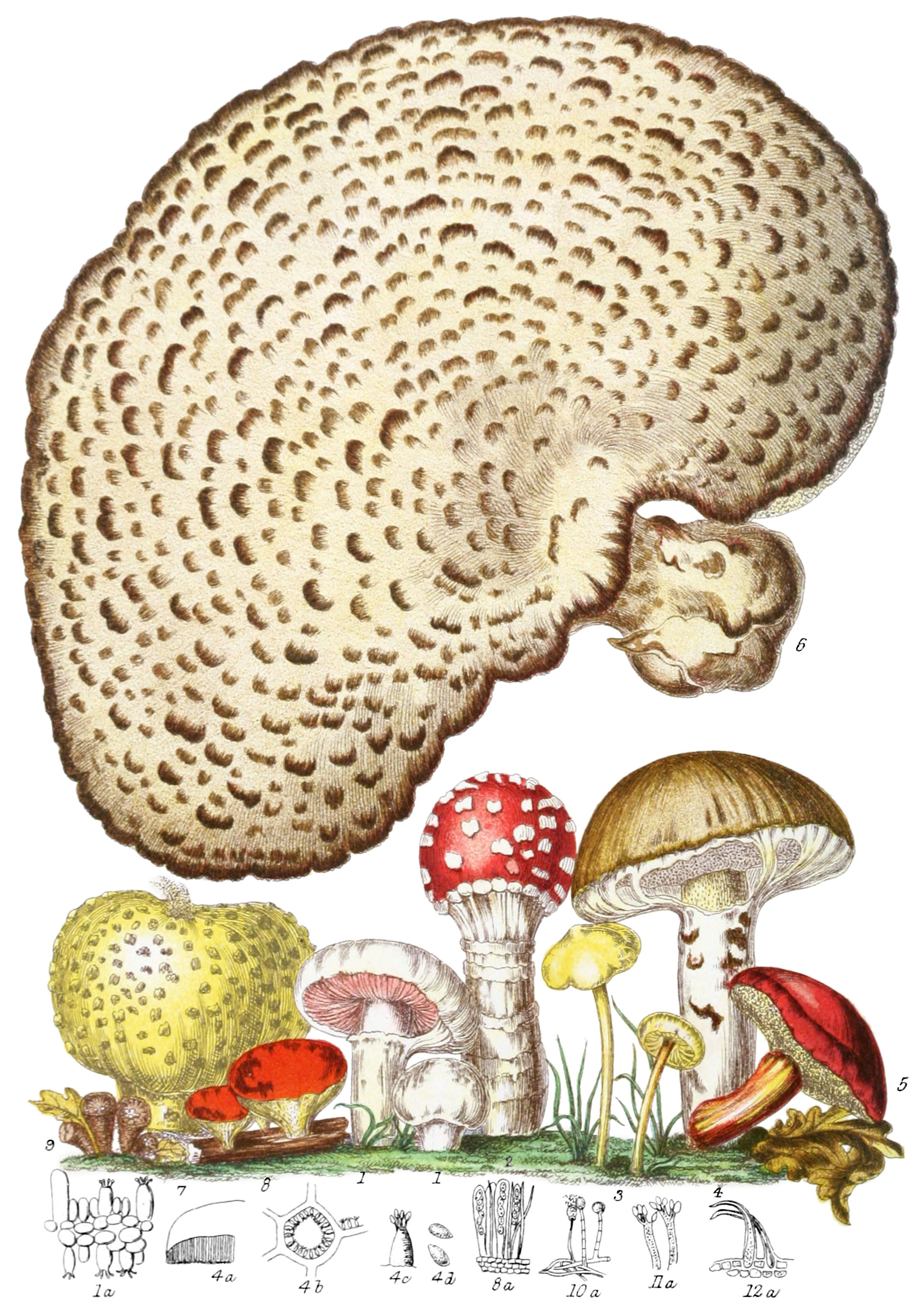 Plants composed of cellules, or filaments, or both, increasing in size inwardly, the outside not changing; growing chiefly on decayed animal or vegetable substances; of short duration. The fructification consists of spores attached externally and often in definite numbers to the cellular tissue, or placed on projections like stalks, or enclosed in membranous bags: other bodies appear to be similar to anthers. The most simple form of Fungus is composed of small jointed filaments, with cellules placed end to end, such as mould or mildew; spores are contained in each cell, or are collected in terminal joints. The spores germinate readily, and the young plants grow with excessive rapidity and force of development.

This Tibe has affinity with Lichens and Sea-weeds; but differs from the former in not containing germs full of green matter,—from the latter in possessing no spontaneous motion in th reproductive particles,—and from both in deriving nourishment from the substance on which they grow.

These plants contain abundant nitrogen, absorb oxygen, and exhale carbonic acid. Some are wholesome, others poisonous.

This lowly Tibe, approaching the verge of vegetable life, of extremely simple structure and fugitive existence, possesses nevertheless considerable interest, not only from the varied forms of the plants it comprises, but from the important part they perform in the transformation of vegetable matter. Many grow on dead or decaying animal or vegetable substances, which they speedily help to disintegrate, thus causing a rapid conversion to earth or mould, reducing what was become injurious to the living to a fresh source of support and sustenance for the future. In low damp situations, the islands of the Bay of Rio Janeiro, plants of all kinds spring forth, grow and decay, with wonderful rapidity; when a large tree is felled, the stem speedily becomes a fine earth, the process being hastened by the growth of countless fungi, which are developed as soon as decay commences.

In the simplest form of this Tribe, the species of mould (10)* and mildew are composed of cells placed end to end; some of the joints separate and reproduce fresh plants; in others, the spores accumulate in the cells, and are dispersed when they break. In the more perfect plants of this class, the masses of cellular tissue assume a determinate figure, the whole central portion being occupied by plates or cells, with spores attached.

This Tribe, comprising infinite numbers, is dispersed over the whole world in indefinite geographical limits. Agaricus and Polyporus are most numerous in species.