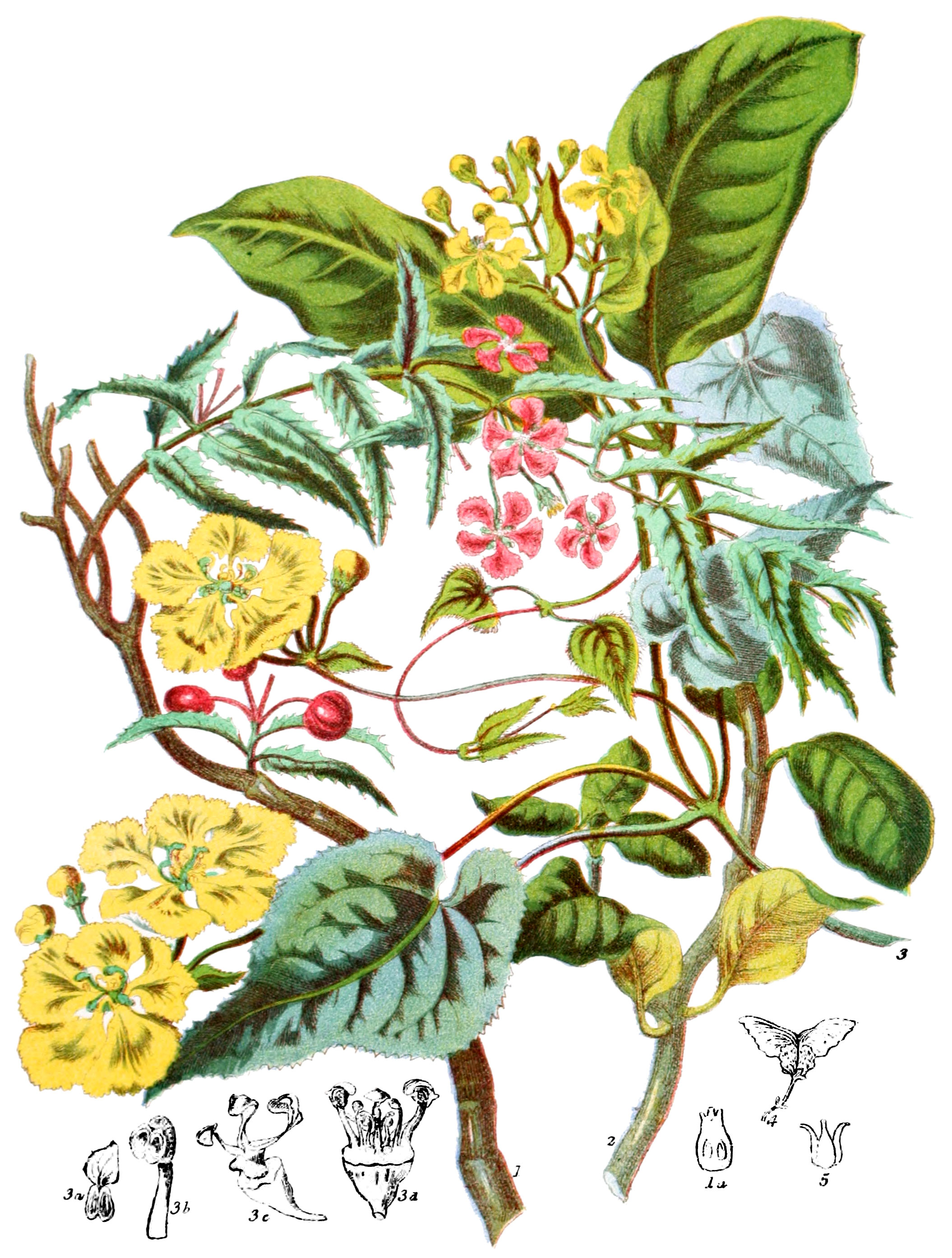 Trees and shrubs, some of which are of a climbing habit. The leaves are usually opposite or whorled, rarely alternate, simple, generally entire at the edges, sometimes having glands either on or underneath the leaf-stalk. The stipules are short, and soon fall off. The flowers vary, those of some species are complete, other have only stamens or pistils; they are most commonly yellow, rarely white, and very seldom blue, a few are red; in some scarce instances imperfect green flowers are intermingled with the perfect ones. The calyx is five-parted, with large glands at the base of one or all the sepals, very rarely without glands. The petals are five, clawed at the base, convolutely folded in the bud. The stamens are mostly double the number of the petals, often united at their base. The carpels are usually three, rarely two, very rarely four, either partly or entirely consolidated at the end, or cut off, or variously expanded. The fruit is either a drupe as in Malpighia, or a woody nut as in Hiptage, or winged as in Ryssopteris.

The most striking peculiarity of this Order is the presence of the large glands on the calyx, these are secreting organs filled with a kind of oil containing a fluid substance besides one that is concrete. Another remarkable circumstance is the tendency among the stems of the climbing species to acquire a very singular form of growth, by having the usual centre of pith and wood surrounded with irregularly-lobed and zoneless ribs, as may be distinctly seen in a section of the stem of Heteropterys anomæla.

Scarcely any uses are made of these plants, except in the countries where they are indigenous.

Almost all the plants of this Tribe belong to the Tropics; the chief portion is soon to be found in South America, nearly three hundred species are natives of Brazil; many grow in Mexico and the West Indiea, some in Africa and Madagascar, a few in India and Ceylon, the isles of the Indian Archipelago, China, and Polynesia. None belong to Europe.

*Malpighia aquifolium was labeled as “Malpighia ilicifolium” in the original legend.