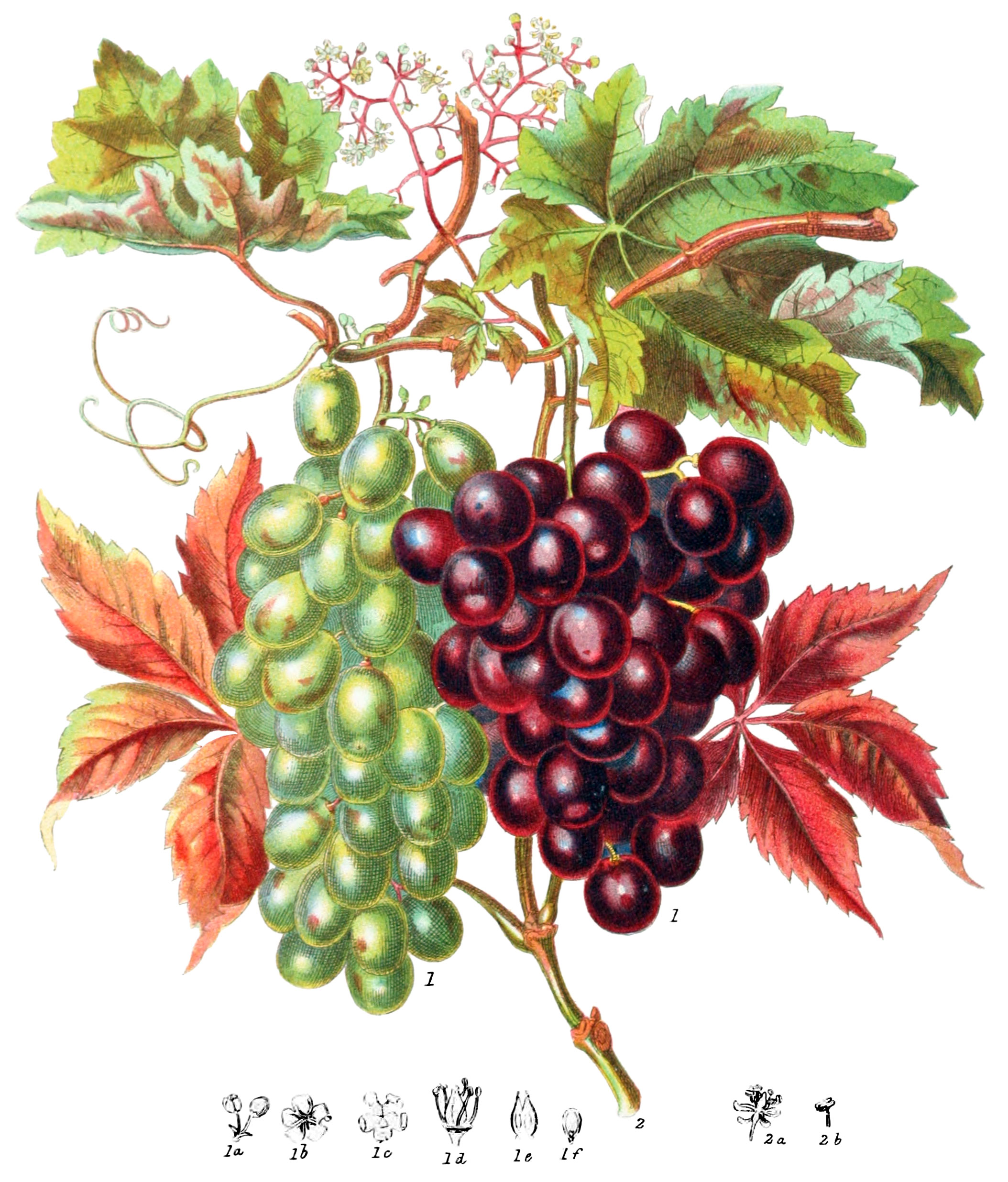 Climbing shrubs, with enlarged separable joints, and erect bushes; the woody tissue abounds with large dotted ducts, which at certain seasons pour forth sap in unusual quantity, popularly called the tears of the Vine. The leaves are either with or without stipules, the lower are opposite, the upper alternate, simple, or compound. The flower-stalks are branching, sometimes undeveloped and changed into tendrils. The flowers are small, generally green, the calyx is minute, nearly entire at the edge; the petals are five or four, inserted on the outside of a disk surrounding the ovary, clinging together at the points, and shed whole in Vitis; distinct or united at the base as in Leea; in the bud the are often turned inward at the edge, and bent down at the point. The stamens are equal in number and distinct, or slightly cohering at the base in Leea, anthers ovate. The ovary is superior, from two to six celled, the style is single, very short, the stigma simple. The fruit is a pulpy berry, usually perfecting only one cell. The seeds four or five, occasionally none, bony and erect with hard albumen.

The petals being turned inward at the point is a remarkable character which connects this order with umbelliferous plants.

Acid leaves and sweet fruit are the usual properties of the Vine tribe.

The Latin name Vitis is derived from the Celtic, thence the various European appellations. The grape-vine ranks highest in the class of fruits; it was among the earliest plants known to man, and the art of making wine was one of the first discoveries of the uses of those trees yielding fruit which were given to him “upon the face of all the earth.” The vine grows wild about the shores of the Caspian Sea; Astracan is probably its northern limit in Asia. In very ancient times it was conveyed to Greece, thence to Sicily, and onwards to the south of France; the Romans planted it on the banks of the Rhine and the Moselle, where it still flourishes, to the utmost extent northwards, except in a few peculiar localities. In France it scarcely advances beyond 48° of north latitude. Although the grapes ripen further north, they do not acquire sufficient saccharine matter to produce good wine. Vineyards were formerly cultivated in England with considerable success in favourable parts of southern countries. The limit of the Vine region to the south is in Africa about 36° north latitude, reaching to 32° in Madeira, and as far as 12° in Asia, vineyards having been established by the French in Pondicherry. In the north-west provinces of India the vine thrives well; but in general the climate prevents converting the grapes into raisins or wine. On the Himalaya, in Kunawur, at 9000 or 10,000 feet, luxuriant vineyards exist, yielding both wine and raisins. In the valley of Cashmere at 5500 feet there are excellent vines. They are found also in China and Java. Beyond the equator, the region of the vine is chiefly in South Africa, from 24° south latitude, to the Cape of Good Hope, where extensive and productive vineyards are cultivated. In the New World there is a corresponding belt on either side of the equator, though of less breadth than the eastern hemisphere; in North America it includes the countries between 30° and 40° north latitude; but the progress of civilization is continually spreading the vine over a wider range. On the Andes of South America it grows at 7000 feet, in the region of Maize as elsewhere; in Brazil and Cumana it finds a suitable climate. From America, it has been transplanted to the Sandwich Isles, and from England to Australia.

This Tribe is found in greatest abundance in the East Indies, inhabiting chiefly woods on the hills; some species are dispersed over mild and hot countries in both hemispheres. None are natives of Europe.