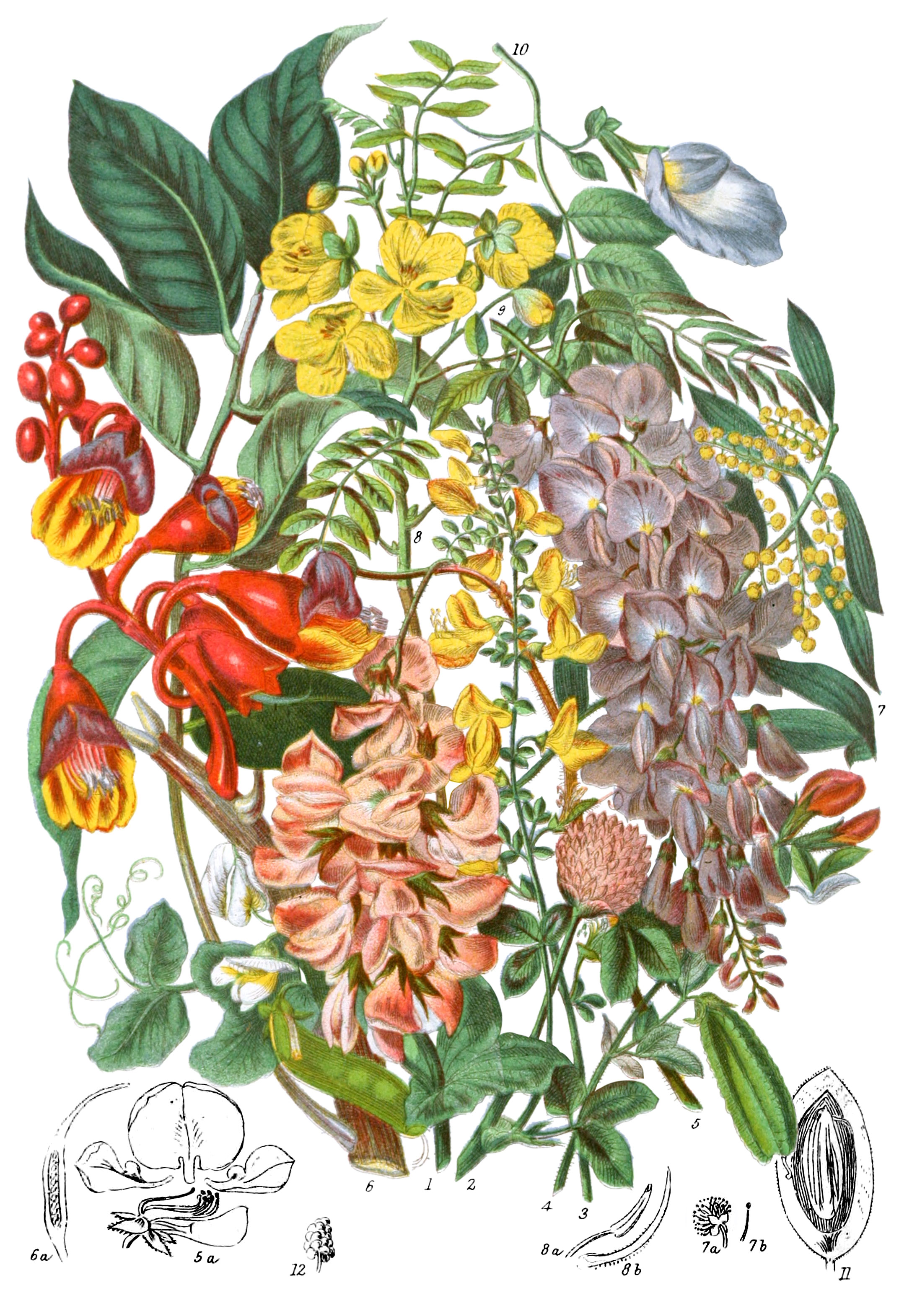 Trees, shrubs, and herbaceous plants, of extremely various aspect. The leaves are alternate, generally compound, having a pair of stipules at the base of the leaf-stalk, and at each leaflet. The flowers are usually papilionaceous, some are spreading and regular; the calyx is below the ovary, five parted, often unequally so, the odd segment place din front. The petals are five, inserted into the base of the calyx, the upper one forming the standard, the one on either side of the wings, the two lower combinedinto the keel, enclosing the stamens and pistil. The stamens are of definite or indefinite number, usually attached to the calyx, either distinct or united into one or two sets, very rarely into three. The pistil is simple, one-celled, or many-seeded, commonly consisting of a single carpel, occasionally of more; the style and stigma are simple. The fruit is a legume, or a drupe, as in Dipterix (11); the seeds are fixed to the upper seam, solitary or several, without albumen.

This Tribe has most affinity with Rosaceæ; the position of the odd lobe of the calyx and the leguminous seed-vessel are distinguishing characters.

This remarkable Tribe is amongst the most important to man, contributing a large portion of embellishment to the earth, yielding excellent timber, the most useful of all dyes, indigo and logwood, bark for tanning, gums, resins, balsams, medcines, and although in general containing deterious juices, yet many species afford an abundant supply of wholesome nutriment in the pulse of the seeds to men and animals. The seed-vessel is developed in diverse forms of pod: in some of the South American trees it is of enormous size and solid woody substance; when ribe, bursting, and the large seeds falling to the ground with considerable noise.

This Tribe is distributed in unequal proportioins in every part of the known world, except in the Isles of St. Helena and Tristan d’Acunha: in the Tropics more than 1600 species have been discovered; thence the numbers gradually diminish north and south: the largest portion are natives of South America: in the countries bording the Mediterranean a considerable number exist.