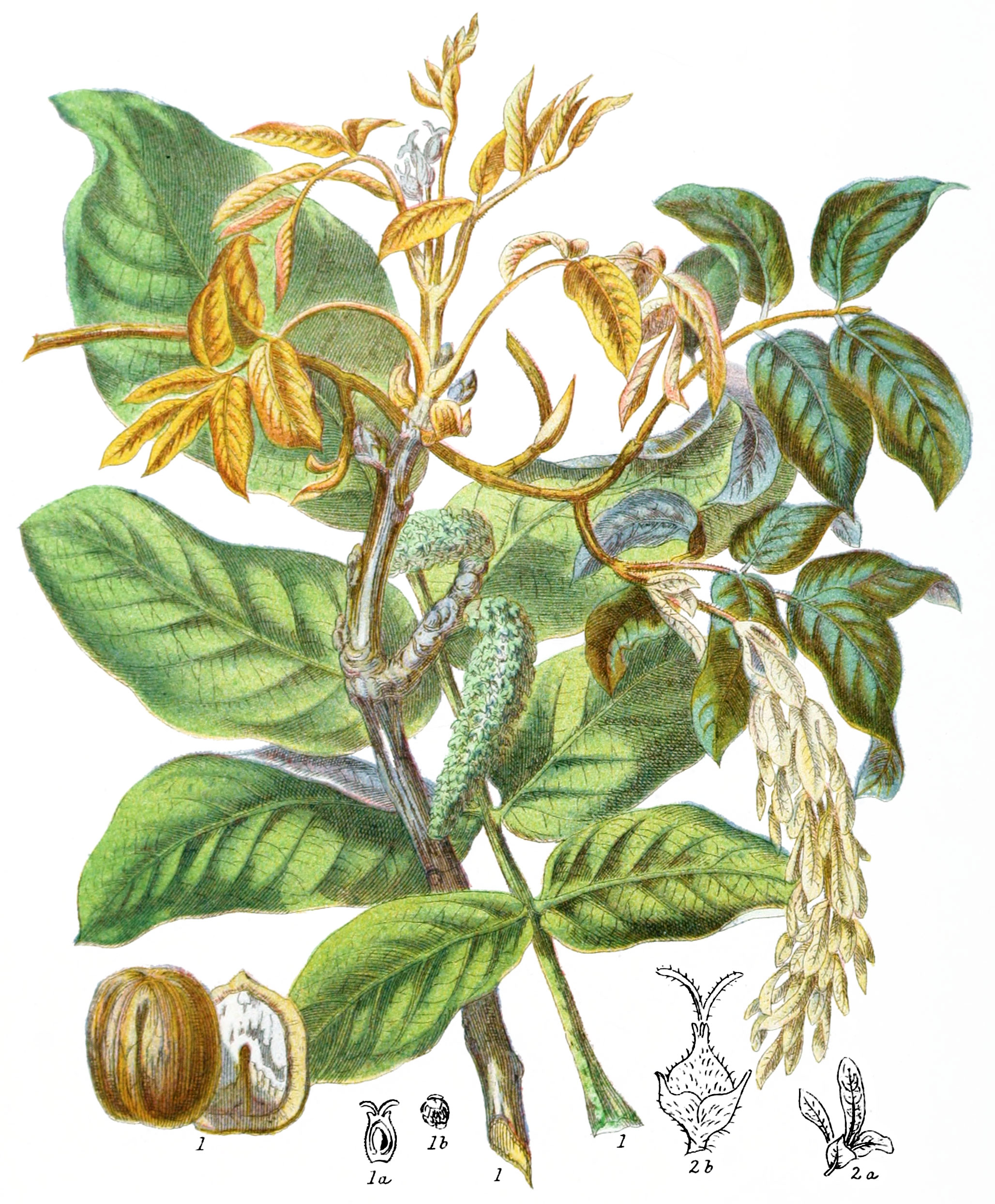 Trees, with a watery or resinous juice. Leaves alternate, pinnate, generally without dots, and have no stipules. Flowers herbaceous, inconspicuious, and imperfect; those having stamens only grow in catkins from the branches of the preceding year; the fruit-bearing flowers grow at the ends of the young branches either in small clusters, or in long racemes; in some cases the two kinds of flowers are mingled in one panicle. The calyx of the staminiferous flowers has two, three, or six membranous unequal divisions at the top, with a scale-like bract at the base. The stamens are three, or many, with short free filaments, and erect, two-celled anthers. The small terminal clusters of fertile flowers of Juglans are surrounded by a few small bracts. Those of Engelhardtia grow in long loose racemes, each flower being enclosed in an involucre, cup-shaped at the base, and united to the calyx, acquiring at last wing-like expansions. The calyx adheres to the ovary excepting at the top, where it is divided into three or five segments, which fall away as the fruit increases. The corolla is formed of very minute petals, or is altogether wanting. The styles are sometimes two, very short, the stigmas seldom more than four, unequal, fringed, occasionally place on the ovary without a style. The fruit is a drupe of one stone, that of Juglans is naked, that of Engelhardtia enclosed in an adherent involucre. The outer covering usually separates it from the stone, which has two or four cells at the base, one at the top.

This order has some connexion with the Cashew-nut tribe, through Pistacia, and also has an affinity with the Oak, and Hazel-nut, in points of structure.

The trees comprised in this small Tribe are chiefly natives of North America; a few belong to Asia. Juglans regia inhabits the woods of Persia and Cashmere. Engelhardtia forms some of the loftiest trees in Java, Borneo, Sumatra, and other islands of the Indian Ocean; some species are thinly scattered over the East Indies, from Singapore to Nepal. Pterocarya is a native of Caucasus. One species is known in the West Indian Islands.

*2 was abled as 1 in the original illustration.