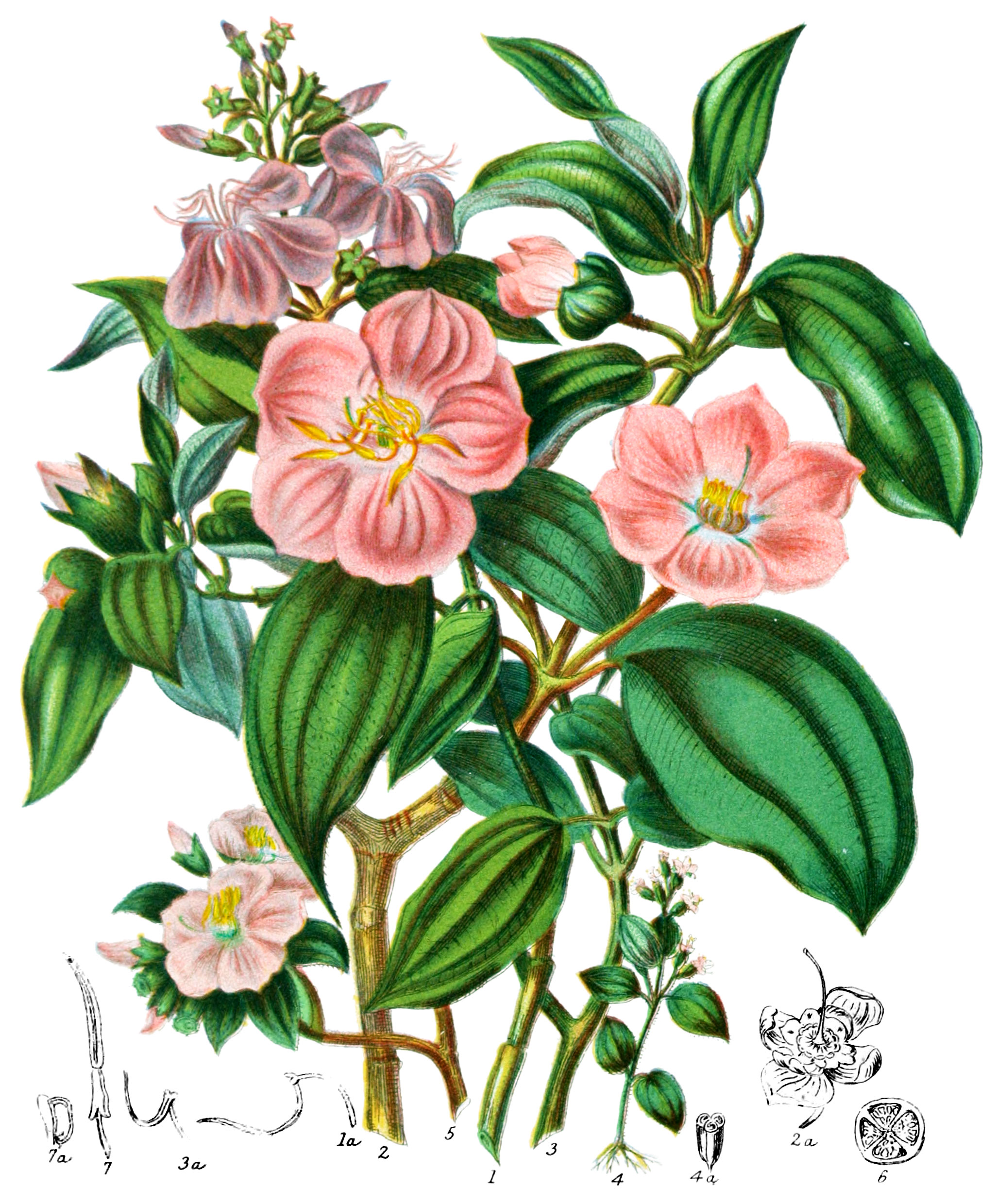 Trees, shrubs, and herbaceous plants. Leaves opposite, undivided, usually entire at the edges, without dots, and with several long ribs running from the base to the point. The flowers have a calyx of four, five, or six lobes, cohering more or less with the angles of the ovary. The petals are equal in number to the segments of the calyx, rising from the base, or from the edge of a disk that lines the calyx; in the bud state they are twisted. The stamens are generally twice as many as the petals, sometimes of the same number; the filaments are curved downwards in the bud; the anthers are long, two-celled, usually bursting by two pores at the point, and lengthened in various ways beyond the insertion of the filaments; sometimes they open longitudinally; before the flowers expand, they lie in cavidies between the ovary and the sides of the calyx. The ovary is partly united with the calyx, and conains several cells; the style is single with a simple stigma; a cup is often present at the top of the ovary, surrounding the style. The seed-vessel is either dry and distinct from the calyx, or succulent and combined with it; it has many cells, in which are numerous minute seeds, usually having appendages of some kind.

Melastomaceæ have most affinity with the Myrtle tribe, from which they differ in the petals being twisted in the bud, and the leaves having no dots.

A slight astringency is the prevailing character of this extensive trie, which throughout its whole range contains no unwholesome plant. Nevertheless, there are none of much importance to man, either as food or medicine, or for domestic uses; yet several of their genera were, on their first discovery, named after distinguished naturalists of various countries. The succulent fruit of many species is eatable, that of some is filled with a juicy pulp, which stains the mouth black in eating; whence the name Melastoma is derived. In some plants this juice is of so intense a black as to be used for ink in Guiana.

This Tribe is, with few exceptions, limited to the equinoctial regions of the globe, and chiefly to the tropics of South America, where about 650 species have been found; on the Andes they ascent to 11,000 feet. Nearly an eighth portion of the genera occur in Asia; Sonerila and four others have not yet been discovered in any other quarter of the world; the various species inhabit principally the southern parts of India, a few only extend into the northern provinces. Some species are found in China; a very few are at present known in New Holland. None have been discovered in Africa north of the Desert of Sahara, nor beyond the Tropic of Capricorn on the south. Melastoma and Osbeckia are natives of Asia, Africa, and America: none belong to Europe.