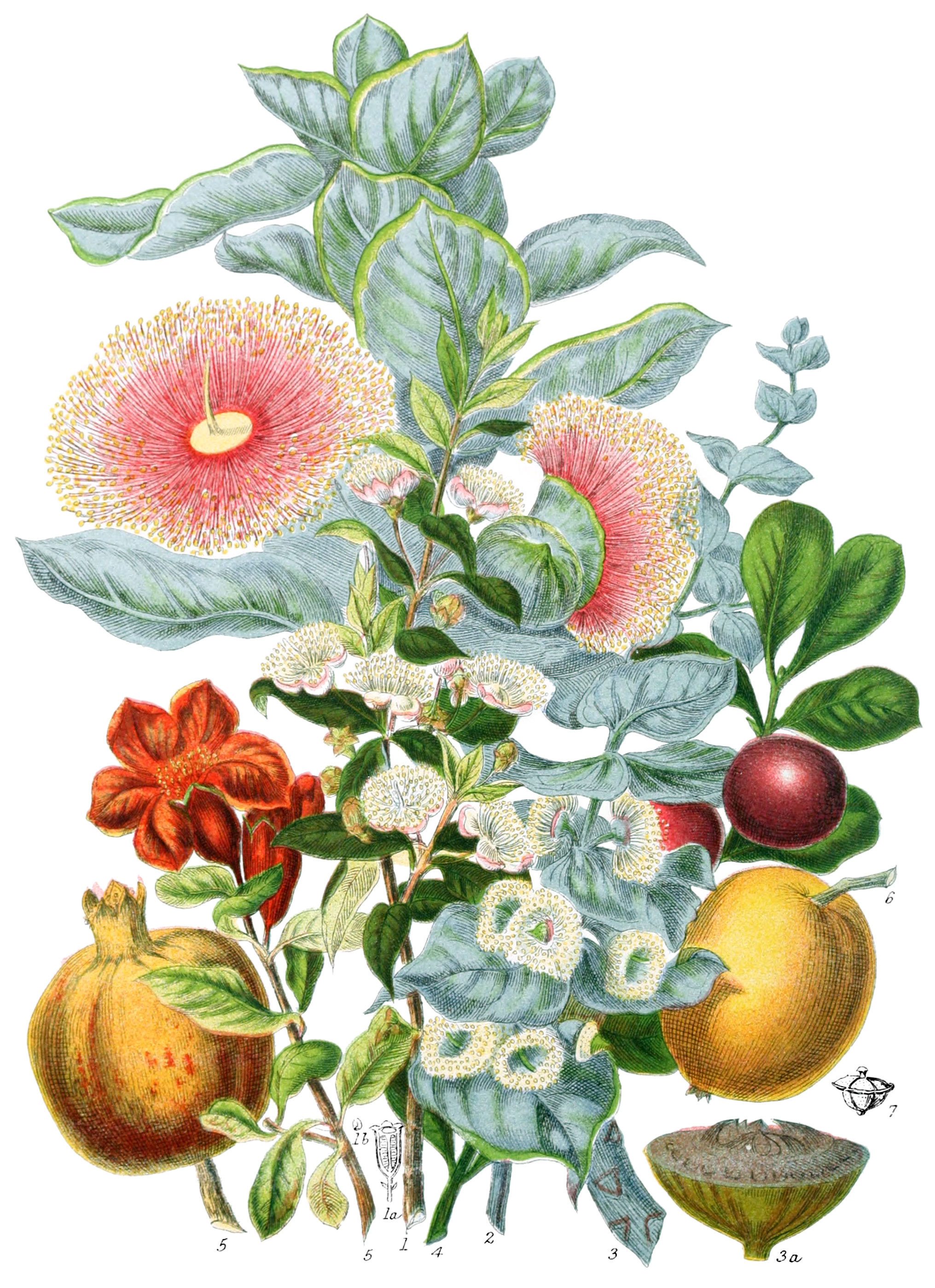 Trees and shrubs, no herbaceous plants. Leaves opposite, entire, usually having transparent dots, and a vein running parallel with the margin. The flowers are various in form, but grow usually from the base of the leafstalk; they are red, white, occasionally yellow, never blue. The calyx is adherent, four or five cleft at the top, sometimes cohering together at the points, and falling off like a cap, as in Eucalyptus. The petals are equal in number to the divisions of the calyx. Stamens either twice as many as the petals, or numerous, rarely of the same number; the filaments are distinct, or connected in several sets, curved inwards before flowering; the anthers are ovate, two-celled, opening lengthwise. The ovary is from one to six celled, the style simple. The fruit is either dry or fleshy, entire or gaping; the seeds are usually of indefinite number, and variable in form.

This is one of the most clearly defined of the natural orders of plants, and very easily recognized. The opposite leaves without stipules, with a smooth edge and marginal vein being sure indications of it. It is closely connected with Rosaceæ, Melastomaceæ, and others, but is obviously distinguishable from all. Nearly all are highly aromatic, from an oil contained in the pores of the leavs. Some curious transformations of petals and sepals occur in this tribe.

The plants of this Tribe are dispersed in Tropical and other hot countries; a great number are natives of the East Indies and South America; in Chile, they grow to the height of 2000 feet on the Andes; at the Equator, the region of Myrtaceæ ascends to upwards of 5000 feet; many genera are peculiar to Australia and South Sea Isles. Sonneratia and Careya belong exclusively to India and its islands. Psidium and Eugenia are natives equally of Asia and America. Metrosideros augustifolia and a very few others are found in Africa; M. lucida extends as far south as Lord Auckland’s Isles. Myrtus is a widely dispersed genus, found at the Straits of Magellan, in Peru, and on the mountains of India. M. communis is the most northern species, having become naturalized in South Europe.