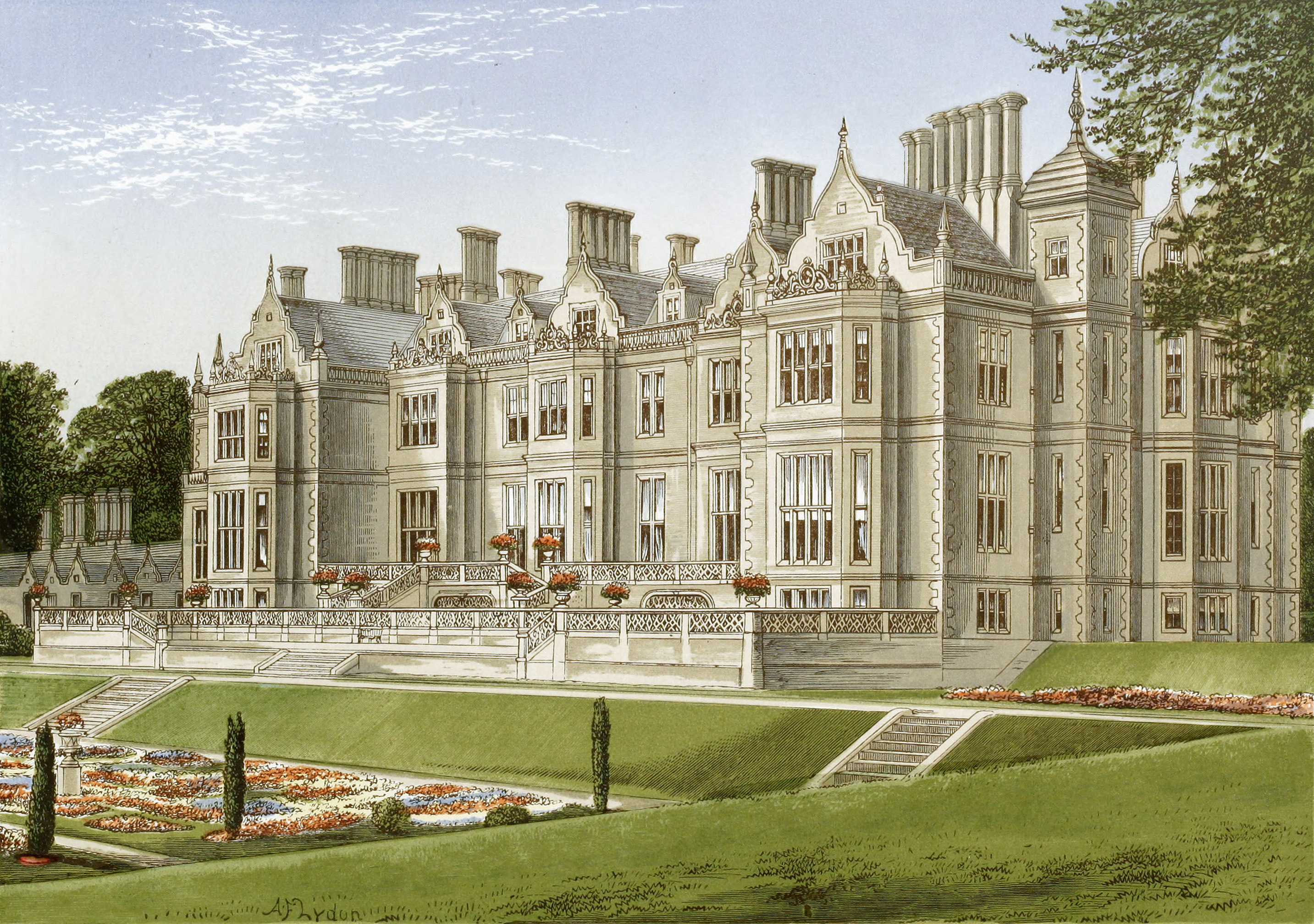 County of Monaghan, Ireland.—Earl of Dartrey.

Dartrey, the seat of the Earl of Dartrey, is situated in the County of Monaghan.

The present house was rebuilt on the site of the old mansion in the year 1846, and commands an extensive view over a large sheet of water^ forming one of a wide-spreading chain of lakes.

The sloping lawn between the house and lake is beautifully laid out in terraced gardens, the brilliancy of which, contrasting with the sombre tints of the fine trees on either side, gives a peculiar richness to the view.

An important feature in the grounds is formed by a wooded island, nearly two miles in circumference, in the centre of which, approached by a magnificent avenue of beech trees, stands a building containing a fine marble monument, executed by Wilton in 1770, in memory of Lady Anne Dawson.

The approaches to the house, running along the shores of the lakes, form a very beautiful drive several miles in extent.

The family of Lord Dartrey came originally from Yorkshire, removing to Ireland in the reign of Queen Elizabeth.

Thomas Dawson, of Armagh, was father of

Walter Dawson, Esq., married Frances, daughter of Eichard Dawson, Esq., an officer in Cromwell’s army, with whom he obtained the estate of Dawson’s Grove, in the County of Monaghan. He was succeeded at his decease by his only surviving son,

Richard Dawson, Esq., of Dawson’s Grove, an eminent Banker and Alderman of the City of Dublin, and M.P. for the County of Monaghan. This gentleman married, in 1723, Elizabeth, daughter of the Most Rev. John Vesey, D.D., Archbishop of Tuam, by whom he left, dying in 1766,

Thomas Dawson, Esq., who was elevated to the peerage of Ireland May 28th., 1770, as Baron Dartrey, and advanced to the dignity of Viscount Cremorne, June 9th., 1785. He married, first, the Lady Anne Fermor, daughter of Thomas, Earl of Pomfret, by whom, who died in 1769, he had a son and daughter, both of whom died in youth. His lordship married, secondly. May 8th., 1770, Philadelpliia Hannah, only daughter of Thomas Freame, Esq., of Philadelphia, by whom he had another only son and daughter, who also died young. He was further created, March 7th., 1797, Baron Cremorne with remainder to his nephew, Richard Dawson, Esq., and his heirs male. At his death, March 1st., 1813, the Viscountcy of Cremorne expired, but the Barony of the same devolved on his great-nephew,

Richard Dawson, third Baron Cremorne, of Dartrey, K.P,, formerly a Lord in Waiting on the Queen, Lord Lieutenant and Custos Rotulorum of the County of Monaghan, born September 7th., 1817, created Baron Dartrey, September 20th., 1847, and Earl or Dartrey, July 12th., 1866. He married, July 12th., 1841, Augusta, daughter of Edward Stanley, Esq. and Lady Mary Stanley, daughter of the Earl of Lauderdale, and had with other children,

Vesey Dawson, Lord Cremorne, Lieutenant-Colonel in the Coldstream Guards and M.P. for the County of Monaghan, born April 22nd., 1842.