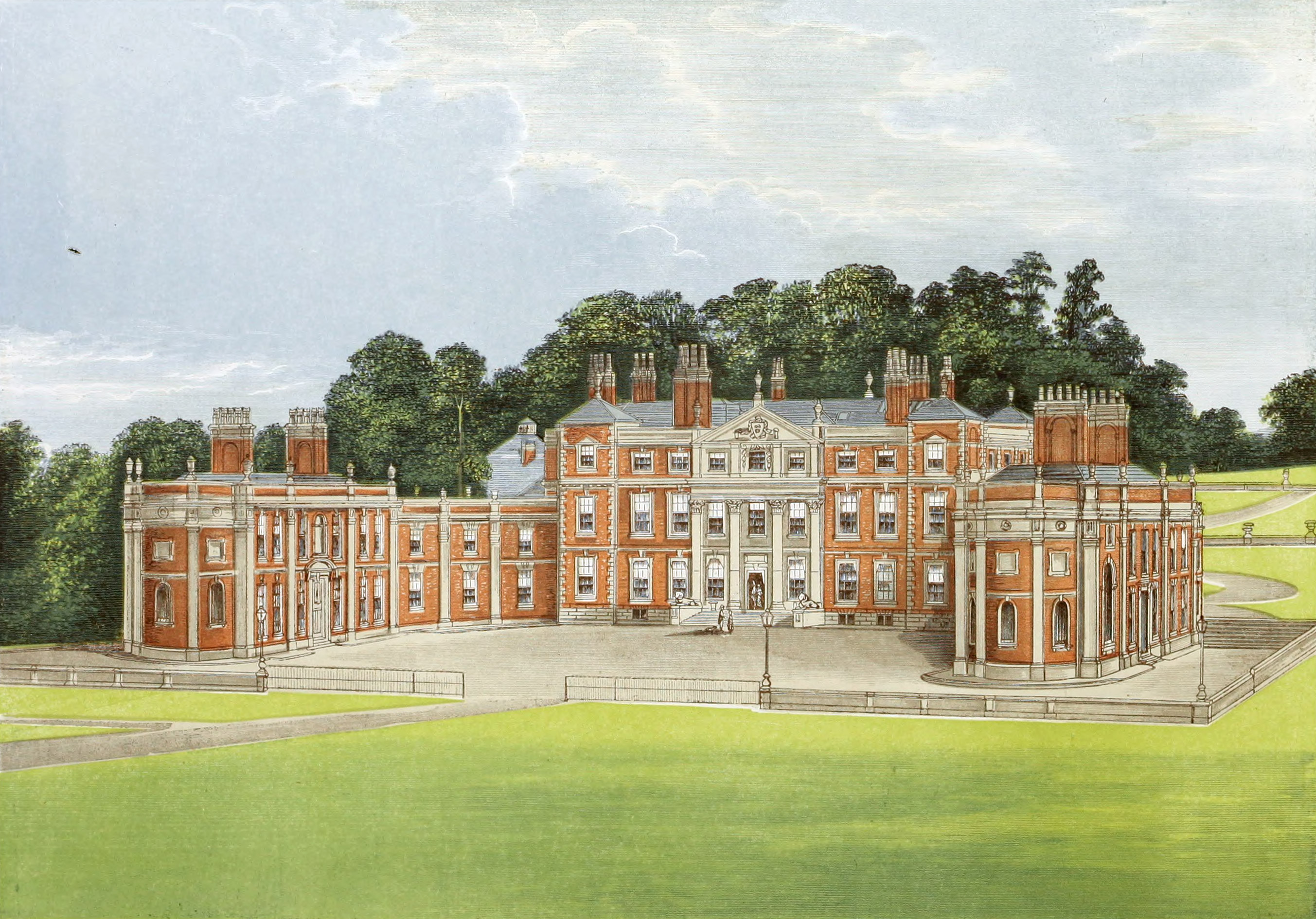 This is described as a domain of singular beauty; cragged rocks, bill and dale, wood and water, all contributing in turn to set it off.

In the grounds are the remains of Red Castle, connected witb tbe history of the family during the civil war; and on the highest part of a noble terrace is a column one hundred feet in height, bearing a statue of Sir Rowland Hill, the first Lord Mayor of London of the Reformed Church.

There was a tradition in ancient times, as stated by Camden, that the Britons had here a city; and afterwards the Romans appear to have had an encampment or town also.

Within doors, the house, which was considerably altered in the reign of Queen Anne, and again in 1832, contains some splendid historical and other paintings and portraits, in the spacious and handsome dining room. In the south wing are the private chapel and the library, the former being said to be one of the most elegant in the kingdom. There is also a museum, containing specimens of nearly every British bird.

The estate was formerly held by a family of the same name, one of whom, Sir George Hawkstone, of Hawkstone, was High Sheriff for the county in the year 1416.

Ralph Hill, married the daughter of Thomas Green, of Green’s Norton, and had two sons, of whom

Humphrey Hill, of Adderley, was great grandfather of

Rowland Hill, Esq., of Hawkestone, married to Margaret, daughter of Richard Whitehall, Esq., and had three sons. The second,

Sir Richard Hill, P.C., living in the reigns of King William III., Queen Anne, and George I., died unmarried, leaving much of his large fortune between his two nephews, Samuel Barber and Thomas Horwood, who both assumed the surname of Hill, the son of the former being elevated to the Peerage as Lord Berwick, but the Hawkestone estate went to his nephew and heir-at-law,

Sir Richard Hill, Baronet, M.P. for Shropshire for a long period, died unmarried, November 28th., 1809, when the title devolved on his next brother,

Sir John Hill, Baronet, born August 1st., 1740, who married Mary, daughter and coheiress of John Clarke, Esq., of Petton, Shropshire, and had thirteen children. He died in 1824. His eldest son,

Sir Rowland Hill, Baronet, born in 1800, succeeded his grandfather as Baronet, and his uncle, (his father’s next brother Rowland, G.C.B., who had been created Baron Hill, and afterwards Viscount Hill, for his eminent military services in the Peninsular war), as second Viscount Hill. He married, July 21st., 1831, Anne, only child and heiress of Joseph Clegg, Esq., of Peploe Hall, Shropshire, and at his death, January 2nd., 1875, was succeeded by the elder of his two sons, namely,