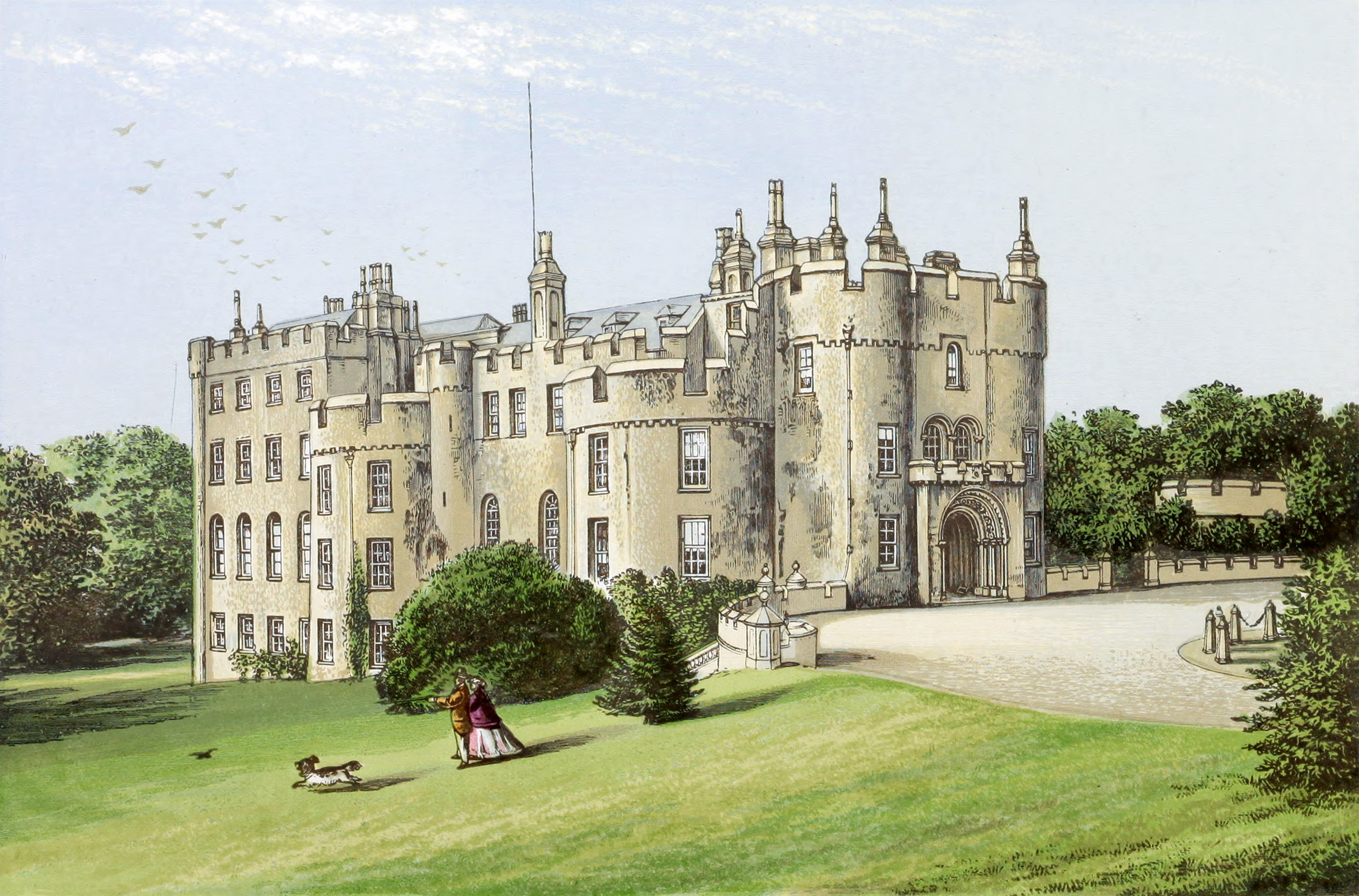 Frequently, as will be seen, as this ancient mansion has changed proprietors, it is said that it has never been without an occupant since the time of its first erection. Altered it has been, as many well be supposed, and added to, and that often, according to the varying tastes of its successive owners, but in its main features it has “braved the battle and the breeze” through all these long centuries. And well may it have been kept to as a dwelling-place in time past, by those who have had taste to enjoy the landscape which is afforded by well-timbered grounds, and the confluence of the two noble streams which form the Haven of Milford.

Picton Castle was a fortified residence before the time of William Rufus.

William de Picton, a Norman Knight, having dispossessed and perhaps slain the original owner of the fortress, established his own family in the succession. After the lapse of several generations the line ended in two berothers—

Sir Philip Picton, who married Maud, daughter of William Dyer, of Newport, Pembrokeshire, and was ancestor of the Pictons of Poyston, in that county, of which family was the gallant Sir Thomas Picton.

Sir william Picton, had a daughter and heiress, who married Sir John Wogan, of Weston, Knight, and brought him Picton Castle as her dowry.

Sir John Wogan, of Picton Castle, married Anne, daughter of James Butler, Earl of Ormonde, by whom he had two daughters and co-heiresses, namely,

Katharine Butler, married Owen Don, or Dunn, of Muddlescombe, in Carmarthenshire, and inherited Picton Castle as her marriage portion. They had

Henry Donn, afterwards Knight, who married Margaret, daughter of Sir Henry Wogan, Knight, of Weston, the heir of the afore-mentioned, and was killed, together with hit brother-in-law Sir Henry Wogan, and others of the Welsh gentry, at the battle of Banbury, in 1469. He left issue two daughters, one of whom,

Jane Donn, married Thomas ap Philip, of Cilsant, in the county of Carmarthen, descended from the princely race of Cadivor ap Collwynn, Lord of Dyved, or Pembrokeshire, who died in 1089, and brought him Picton Castle. He was knighted about the year 1512, and his great grandson,

Sir Richard Phillips, garrisoned Picton Castle in behalf of the king during the civil wars. It sustained a long siege, and would not have surrendered when it did but for the following circumstance:—In the lower storey of one of the bastions was the nursery, having in it a small window, at which a maid-servant standing with Sir Erasmus Phillips, then an infant, in her arms, when a trooper of the Parliamentary forces approached it on horseback with a flag of truce and a letter; to receive which the girl opened the window, and while she stretched forward, the soldier, lifting himself on his stirrups, snatched the child from her arms, and rode with him into the camp. A message was then forwarded to the governor of the garrison informing him that unless the Castle was immediately surrendered the child would be put to death. On this the garrison yielded, and was allowed to march out with the honours of war. It is said that the Parliamentary general was so touched by the loyalty of Sir Richard Phillips, and the stratagem by which he had been compelled to surrender, that he gave orders that Picton Castle should not be demolished, as was the fate of the other fortresses of Pembrokeshire. Thus saved, the Castle and domains passed from father to son to the fifth Baronet,

Sir Erasmus Phillips, who was drowned at Bath in 1743, was succeeded in the title and estates by his brother (of Kilgetty) as

Sir John Phillips, who was, in 1776, created Baron Milford of the kingdom of Ireland. At his death, issueless, in 1823, the Peerage became extinct, but the Baronetcy passed to the family of Phillips, of Sandy Haven, in the county of Pembrokeshire, in which it still continues.

Richard Bulkeley Phillips Grant, Esq., who was great great grandson of Bulkeley Phillips, Esq., of Abercover, in the county of Carmarthen, youngest son of Sir John Phillips, the fourth Baronet. He was created a Baronet in 1828, and a Peer of the Realm in 1847, under the title of

Baron Milford, of Picton Castle, in the county of Pembroke. He died January 3rd., 1857, without children, when the Peerage and Baronetcy became extinct, but the Castle and estates passed, under the will of the first Lord Milford, to his half- brother,

The Rev. James Henry Alexander Gwyther, who married Miss Mary Lee, an old friend of the wife of the author of the present work, assumed by Royal license the surname of Phillips, and has issue.