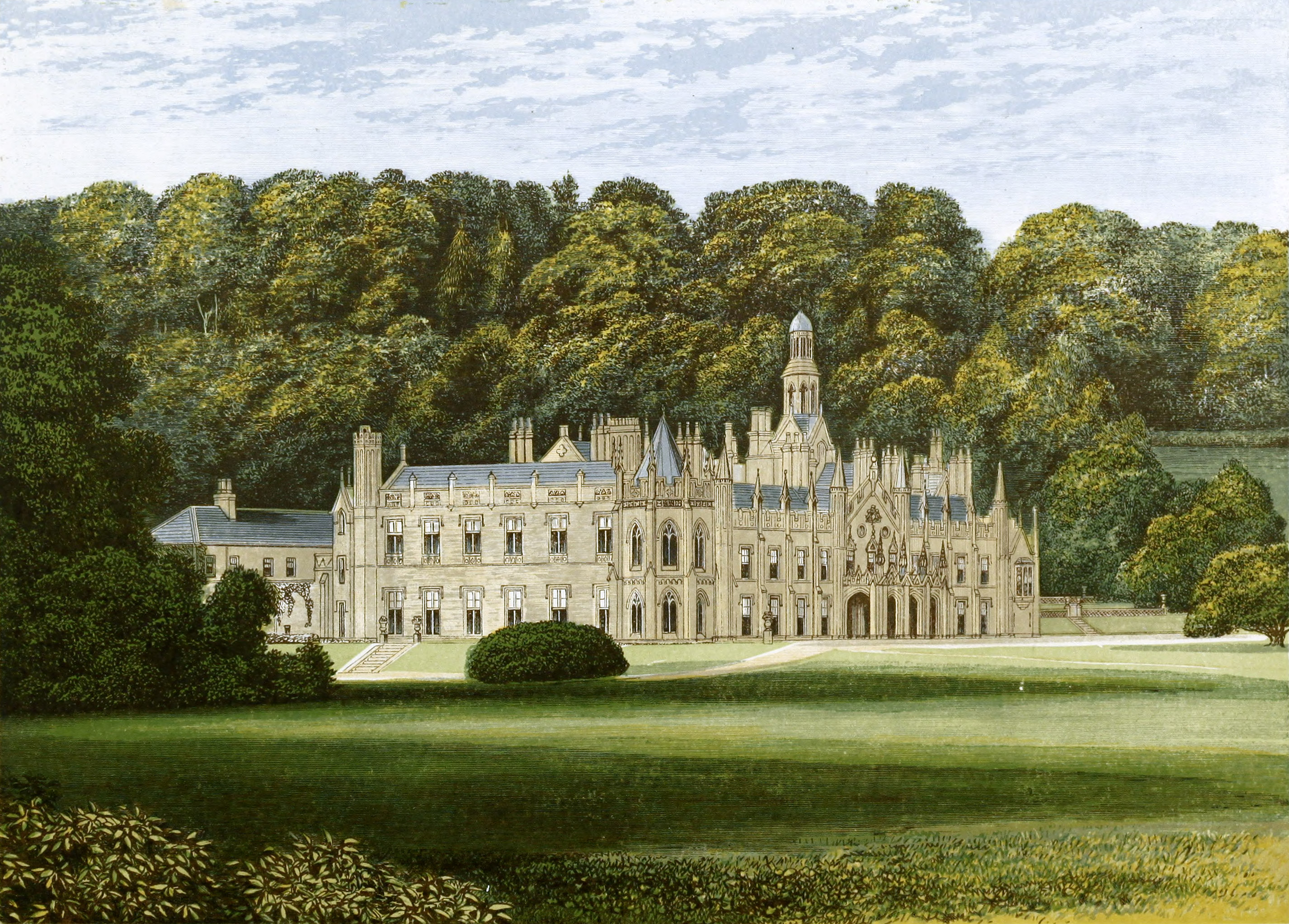 Shelton Abbey, situated near the town of Arklow, about fifty miles from Dublin, lies at the foot of the wooded hills, where the Vale of Avoca opens to the sea.

The park and pleasure grounds extend along the banks of the wide and rapid river which gives its name to the valley. The natural woods, composed principally of oak and holly, are of great extent, covering a varied surface of hill and dale. There are also some fine beech trees, among which is a group of great size near the Abbey, remarkable for the circumstance of their being the first of their species planted in Ireland.

The Abbey stands on a low rising ground near the river, and is completely sheltered by wooded hills. It is built in the Gothic style, and is very extensive. The principal storey contains an entance hall, the ceiling of which is ornamented with carved oak beams and gilt pendants. This leads into the great hall, the walls of which are wainscotted with oak, and hung with family portraits; it opens into a cloister gallery of considerable length, lighted with stained glass tracery windows, and forming the approach to all the principal rooms, which lie en suite, and are finished in a style corresponding with the hall and cloisters, from which also rises the great staircase of carved oak. The mantle-piece in the dining-room is a beautiful specimen of old oak carving, and over it, inserted in the oak, is a large painting by Snyders.

The different rooms contain a valuable collection of paintings of the Italian, French, and Flemish schools.

There is a large and very old library, containing a number of curious manuscripts, and a large collection of scarce and valuable books, drawings, and engravings.

The old house was completely altered, and the new part added in the beginning of the present century.

The house and estate of Shelton came into the possession of the Howard family about the year 1643, when an ancestor of the present possessor sold his property in England, and bought in Ireland instead. During the reign of James the Second the property was forfeited to a Mr. Hackett, Mr. Howard and his family having been obliged to fly the country and return to England. A tradition exists that during Mr. Hackett’s occupancy King James the Second, on his way to Wexford after the Battle of Boyne, stopped at Shelton to rest for a few hours. King James in his memoirs mentions having partaken of refreshments in the house of a Mr. Hackett in the county of Wicklow. The event has given its name to an old road in the park, once the pubHc road, which still goes by the name of King James’ Road.

When peace was restored^ and William the Third proclaimed king, Mr. Howard and his family returned to Ireland, when their forfeited estates were restored to them. In 1778 the descendant of Mr. Howard was raised to the peerage as Baron Clonmore and Viscount Wicklow, and at his death his widow, Alice, Viscountess Wicklow, was created Countess of Wicklow.