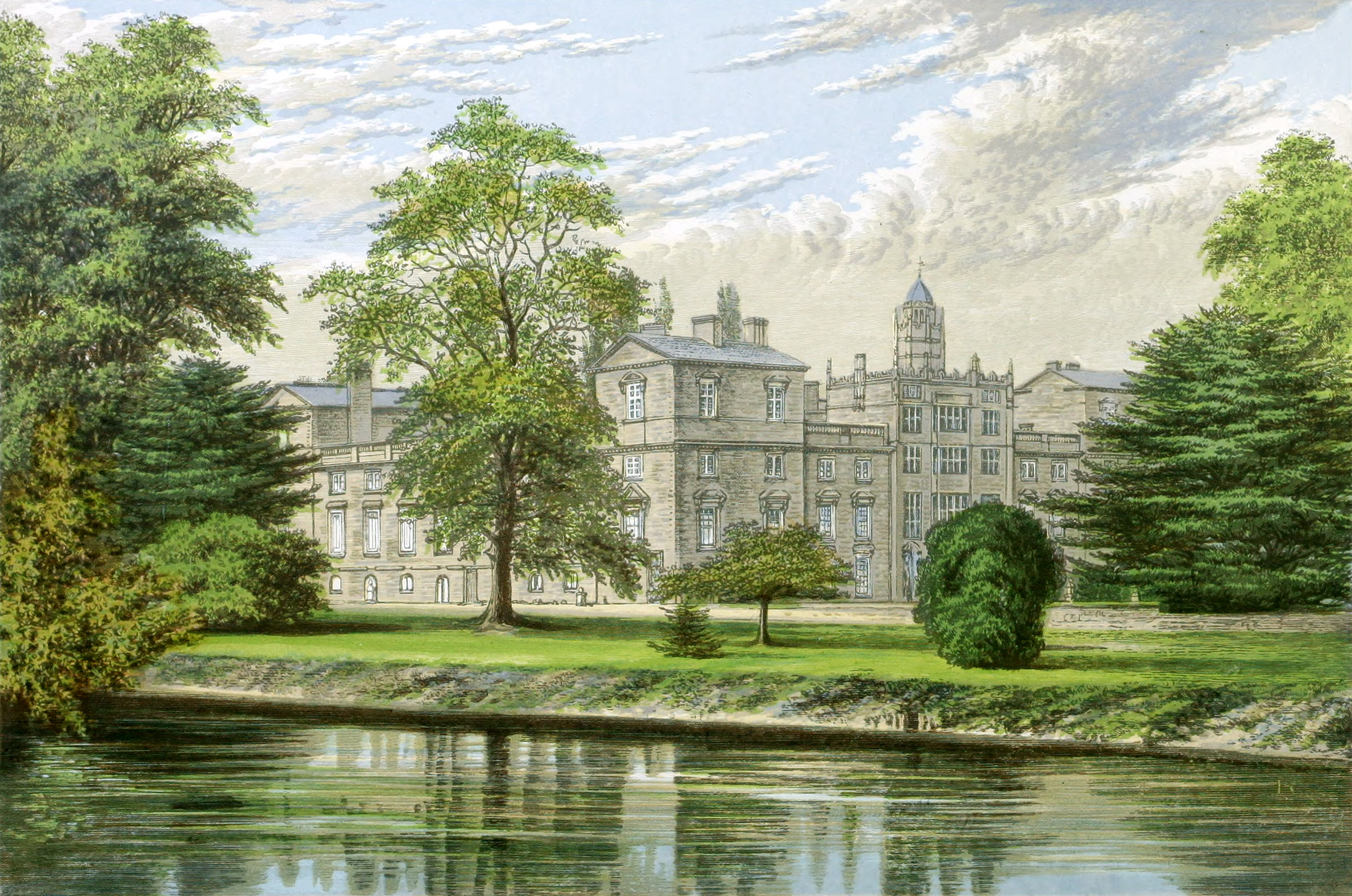 Wilton, Wiltshire.—Earl of Pembroke and Montgomery.

Wilton House is an imposing structure, and the grounds immediately adjoin the town of Wilton, which is pleasantly situated on the junction of the rivers Nadder and Wiley, from the latter of which it derives its name. It was rebuilt, as to its present front, by Inigo Jones, a part of the previous mansion having been destroyed by fire in 1648.

In the year 773 an abbey was founded here by Weolkstan, Earl of Ellandum.

In 830 it was completed, when Egbert, King of England, converted it into a priory for thirteen nuns, and his sister Aburga was made prioress.

In the reign of Alfred the Great the priory was demolished by the Danes, but on their being expelled from the country he founded in its stead a monastery on the site where his palace had stood, and added a lady abbess and twelve nuns to its original foundation.

In the reign of Edgar, a lady named Walfrith being the Abbess, it was again destroyed by Swein, in revenge for a massacre of the Danes.

It was afterwards restored, but in Ethelred’s reign the Danes again invaded the country, and he was succeeded on the throne by a Danish monarch, followed by three others of that race.

On the restoration of the Saxon kings the monastery was rebuilt by Edith, wife of Edward the Confessor. It was now constructed of stone, having previously been of wood.

In the year 1066 William the Conqueror obtained possession of the throne, and, as recorded in Domesday Book, doubled the value of the house, the abbess at that time being Christiana, sister of Edgar Atheling, and here she educated Matilda, her niece, who afterwards became wife of Henry Beauclerc.

During the civil wars that followed, Wilton met with its share of disaster.

In the year 1143 King Stephen arrived here with his brother, the Bishop of Winchester, and a large force, and began to convert the monastery into a place of military defence, but he was attacked in it by the Earl of Gloucester, and fled, when it again was sacked. It was, however, afterwards restored.

In the reign of Edward the First, Juliana Gifford being the abbess, a knight named Osborn Gifford carried off two of the nuns, with, as is hinted, their own assent.

In the reign of Henry the Eighth the monastery shared in the general dissolution of those institutions, the abbess being Cecilia Bodenham, and was shortly afterwards levelled with the ground. It was then granted by that monarch to Sir William Herbert, who was ancestor of the present Earl, and was made Earl of Pembroke by King Edward the Sixth, about the year 1560.

The principal paintings at Wilton House are the following:—The celebrated picture by Vandyke, seventeen feet in length by eleven feet in height, containing ten whole-length figures.—Philip, Earl of Pembroke, and his wife; their five sons Charles Lord Herbert, Philip, William, James, and John; their daughter Anna Sophia, and her husband, Robert, Earl of Caernarvon; Lady Mary, daughter of the Duke of Buckingham, wife of Charles Lord Herbert, and above, in the clouds, two sons and a daughter who died young. King Charles the First and his Queen Henrietta; William Earl of Pembroke; the first wife of Philip, second Earl of that name; three children of Charles the First; the Duchess of Richmond and Mrs. Gibson; the Duke of Richmond and Lennox; the Countess of Castlehaven; Philip, the second Earl of that name; Sir William Herbert, the founder of the family; Sir Charles Hotham; the Duke of Montagu; Lady Rockingham; Frederick, Prince of Wales; Anne, Princess Royal; the Princess Amelia; the Princess Elizabeth; Sir Andrew Fountaine; Barbara, second wife of Thomas, Earl of Pembroke; an Architectural Design; another of the like kind; Dogs; Flemish Nobleman; the Woman taken in Adultery; Sea Victory; Virgin and Infant; Andromache fainting at the death of Hector; the discovery of Achilles; Fruit; Ark of Noah.

Thomas, eighth Earl of Pembroke, added to the collection, and removed to their present place the cabinets of Guistiniani and Valetta, and of Cardinal Mazarin and Cardinal Richelieu.

The armoury in the hall contains trophies and memorials of the battle of St. Quentin, in 1557, in which the Earl of Pembroke commanded the English forces. Among the curiosities are some fine specimens of horns and bones of the moose deer. The cedars in the grounds near the house are said to be the finest in England. There is also a magnificent specimen of the ilex, and a yew tree of remarkable extent opposite to the Park.

The House is shown to the public on stated days.

The Parish Church was rebuilt by the late Right Honourable Sidney Herbert, afterwards Lord Herbert of Lea, brother of the then Earl of Pembroke, at a cost of upwards of £60,000.

This family of Herbert is derived from Sir Richard Herbert, Knight, of Ewyas, a natural son of William, first Earl of Pembroke, who had been advanced to that dignity May 27th., 1472. The senior line, descended from Sir William Herbert ap Thomas, living in the reign of Henry the Fifth, and who resided at Ragland Castle, in Monmouthshire, is represented by the family of Herbert of Muccruss Abbey, near Killarney, in the county of Kerry.