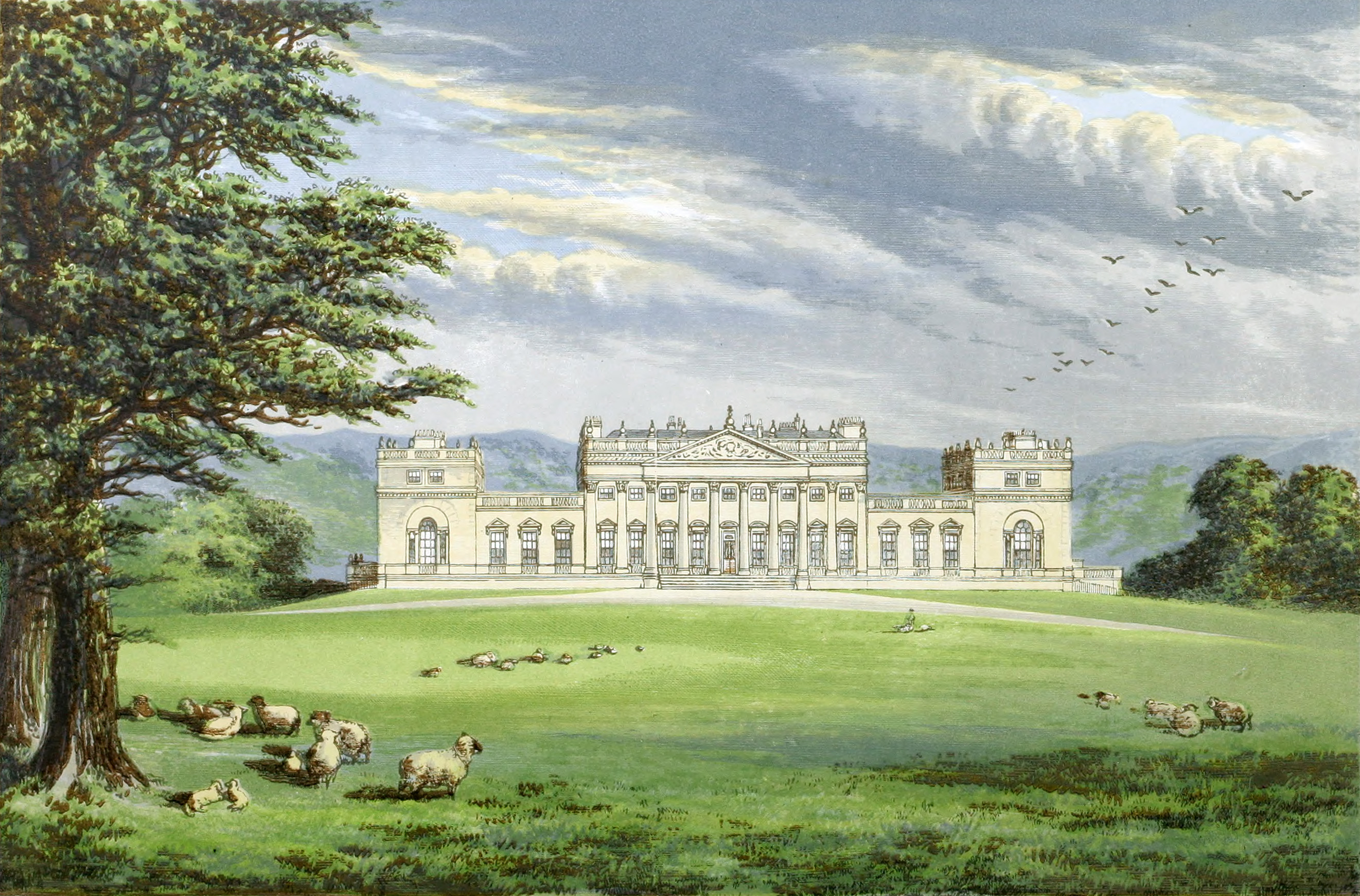 Near Weatherby, Yorkshire.—Earl of Harewood.

Harewood House, the magnificent residence of the Earl of Harewood, is beautifully situated in a noble and gracefully undulated park of upwards of two thousand acres, and looks down over a garden, which in summer is a very blaze of flowers of every hue, upon a fine lake in front. Behind it, a few hundred yards off, on the other side of the hill on which it stands, are the ruins of Harewood Castle, overlooking the valley of the Wharfe, from which in a westerly direction a lovely view of Wharfedale is bounded by the Craven mountains, nearly twenty miles away; while towards the east the great vale of York stretches out, with York Minister rising up from it at about the like distance.

In the year 1080 William the Conqueror gave Harewood, with other large estates in Yorkshire, to

Robert de Romelli, said by Gabriel de Moulin to have been of an ancient and eminent family in Normandy. He had an only daughter,

Cecily de Romelli, married to William de Meschines, Earl of Chester, who thus became, in 1120, Lord of Harewood. They founded a Priory at Embsay, in Craven, which was afterwards removed by their daughter Avicia to Bolton Abbey. They had issue—

The two daughters being co-heiresses of vast estates and wealth, retained their surnames after marriage, and the latter,

Avicia (de Courcy) de Romelli, had by her husband a son, drowned in leaping over the Strid, a narrow chasm in the rocks between which the river Wharfe flows, above Bolton Abbey:—

“He sprang in glee, for what cared he
That the river was strong and the rocks were steep;
But the greyhound in the leash hung baek,
And checked him in his leap;
And never more was young Romilly seen
Till he rose a lifeless corse.”

Wordsworth and Rogers have both recorded this event. There are, however, doubts about the truth of the legend, and Dr. Whitaker imagines it may refer to one of the sons of the first foundress of the Abbey of Embsay, both of whom died young; and it is supposed by many that the story was an invention of the monks, in order to remove from the cold and cheerless heights of Embsay to the lovely seclusion of the valley where Bolton Abbey now stands, the extreme beauty of which is exceeded by no scenery in England.

The manor of Harewood then descended, in 1180, to the eldest son of William and Avicia, (de Courcy,)

De Romelli, whose daughter carried it by marriage into the family of Fitzgerald, in 1195, which was followed by that of

De Aldeburgh, 1365. He had two daughters, co-heiresses of the Harewood estates, namely,

Gascoigne, in 1545, Marmaduke Gascoigne marrying the daughter and heiress of Henry Redmayne, Esq.

Wentworth, ancestor of Lord Strafford, 1580, by marriage with Margaret, daughter and heiress of William Gascoigne.

Lascelles, 1739, (by purchase,) ancestor of the Earls of Harewood.

Among the paintings at Harewood House are two views of Plompton Rocks by Turner; Richmond Castle, Knaresborough Castle, Aisgarth Force, and Harewood Castle, by Dahl; Henry, second Earl of Harewood, by Jackson; Mr. Pitt, Henrietta, wife of the second Earl, Lady Worsley, Mrs. Hale and five children, and Edward, Earl of Harewood, his wife, and child, by Sir Joshua Reynolds; Lady Frances Hope, Lady Cavendish, Mr. Arthur Lascelles, and Mr. Edwin Lascelles, in a group; Edward, first Lord Harewood, and Jane, Countess of Harrington; Lady Mary Yorke, daughter of the first Earl, and Edwin, Viscount Lascelles, both by Hopper; Louisa, Dowager Countess, wife of the third Earl, by Richmond, presented by the tenants of the estate; Henry, third Earl, on horseback, by Grant, R.A., presented by the members of the Bramham Moor Hunt; and Henry, second Earl of Harewood, a full-length portrait by Sir Thonas Lawrence, presented to the Countess of Harewood by a numerous body of the freeholders of the county of York.

The family of Lascelles, Earls of Harewood, derives from John de Lascelles, of Hiuderskelfe, (now called Castle Howard,) in the Wapentake of Bulmer, in the North Riding of the county of York, living in 1315,