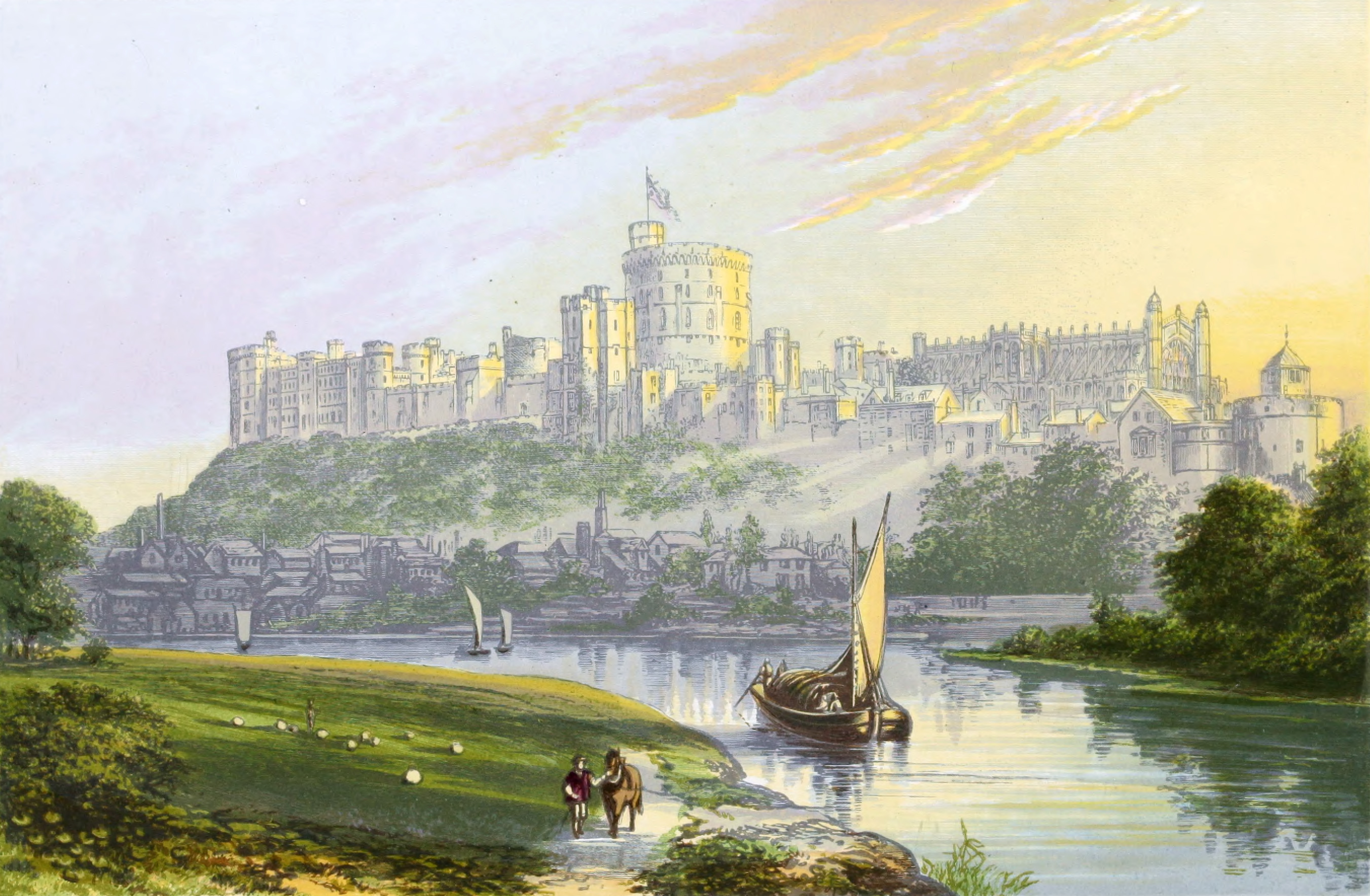 The history of Windsor Castle is the history of England and of England’s Kings and Queens. To do it justice would require a far abler pen than mine, and far more space than is allowed by the narrow limits of a work like the present. The building is worthy of England, and of the long and illustrious line of monarchs that have sat upon our throne, and though there are many more striking and more picturesque situations to be found among those that abound in the broad lands of the island, there is perhaps none more thoroughly suitable for the Palace of the Ruling Sovereign of England, inasmuch as there is none more thoroughly English in its character and features.

Standing as it does on a gentle eminence in a part of the country which is neither flat nor mountainous, and surrounded as far as the eye can reach by beautiful Home scenery of a similar character, the winding Thames completes the beauty of the landscape, and at the same time carries to the ocean the story of the events which unite for ever its own name with those of Britain, thence to be borne by our ships of native oak to every corner of the globe—a world-wide history, the History of England.

Windsor Castle, originally a fortress of the Roman invaders, and probably of previous existence, was founded by William the Conqueror, and has, as might be supposed, received numberless alterations and additions since. According to some historians, it was’ newly built by Henry I., where, in 1122, he celebrated his marriage with his second Queen, Adeliza of Louvain.

In the centre of the building, and raised on a mound, is the keep, or round tower, from which a full view of the neighbouring country is obtained.

In 1170 a Parliament was held in the fortress under Henry II., in which William the Lion, King of Scotland, and his brother David attended as feudal barons of the realm.

Edward I. held a grand tournament in the adjoining park.

Edward III. was born here, hence called Edward of Windsor. This monarch made great improvements in the Castle and town.

These vast works were superintended by the celebrated William of Wykeham, afterwards Bishop of Winchester, and the munificent founder of New College, Oxford, who was appointed keeper of the Manors of Old and New Windsor in 1359. On the Winchester Tower there is still to be seen a stone on which are cut the words “Hoc fecit Wykeham.” The king on seeing the words “was exceedingly worth against Wykeham, and but for his dexterity the affair would have gone seriously with the architect. Being summoned into the king’s presence, the king demanded his explanation, when Wykeham told the king he read the inscription wrongly; it was not ‘that Wykeham, made the tower, but that the tower made Wykeham,’ whereat the king’s worth was appeased.”

In this reign King John of France and King David of Scotland were both prisoners together in the Castle.

Henry VII. made various alterations in it.

Queen Elizabeth constructed the terrace walk on the north side.

During the civil wars in the reign of Charles I., Windsor Castle was garrisoned by the rebel troops. It was unsuccessfully attacked by Prince Rupert in the autumn of 1042; and in 1048 it became the prison of the unfortunate monarch.

In the year 1824 the sum of £300,000 was voted by the nation for the general improvement of the Castle, and subsequent grants have raised the amount appropriated for the buildings alone to nearly £800,000.

It has in modern times been the favourite residence of King George III., King George IV., who greatly enriched it, William IV., and Queen Victoria, whom may God preserve.

The Chapel of St. George was given its present form by Edward IV., and was completed by King Henry VII. It is within it that the Knights of the Garter are installed, and the long lines of their banners that float from under its roof, are in themselves a history which connects it more or less nearly with almost the whole of the nobility and gentry of the country—a commingling of ranks, from the scions of Royalty down to the Commons of the land, which has had vast influence in making England the mighty and happy country that it is.

The state apartments are as follows:—

Upon the crimson silk damask hangings are displayed the insignia of the Orders of the Garter, Bath, St. Patrick, and the Thistle.

The Queen’s State Drawing Room is adorned with fourteen paintings, nine of them by Zuccarelli, namely,—1. The Meeting of Isaac and Rebecca. 2. The Finding of Moses, (painted expressly for George III., the artist being left to the choice of his subject.) 3 to 9. Seven large landscapes, one of which represents Jacob tending the flocks of Laban. 10. Portraits of Henry, Duke of Gloucester, when a child, the youngest son of Charles I. 11. George I., by Fountaine. 12. George II. 13. George III. 14. Frederick, Prince of Wales.

The rich silk hangings are ornamented with the arms of William IV. and Queen Adelaide.

The State Ante-Room contains beautiful specimens of carving of fruit, fowl, fish, and flowers, by Gibbons; and a portrait on stained glass of George III., in his coronation robes.

The Grand Staircase has several suits of armour of the sixteenth century, military trophies, a sculpture of an infant Hercules, antique study, etc.

The chimney-pieces, and some of the picture-frames, etc., are encircled with carvings by Gibbons of wreaths of fruit, flowers, etc.

The Presence Chamber is embellished with some magnificent specimens of Gobelin tapestry, illustrating the history of Jason and the Golden Fleece. It also contains the rare and costly Malachite vase presented to the Queen by the Emperor of Russia; and two exquisitely worked vases of granite, a present from the King of Prussia to King William IV.

St. George’s Hall, two hundred feet in length, thirty-four feet wide, and thirty-two feet high, has whole-length portraits of the following sovereigns:—James I. and Charles I., by Vandyke; Charles II. and James II., by Sir Peter Lely; Mary, William III., Anne, and George I., by Sir Godfrey Kneller; George II., by Zeeman; George III., by Gainsborough; and George IV., by Sir Thomas Lawrence. Also on twenty-four shields, behind the throne or chair of state, are the arms of each sovereign of the Order of the Garter, from the time of its institution in the reign of Edward III. to King William IV. Also four knights in complete armour, one representing the founder of the order, and the other his son, Edward the Black Prince.

The Guard Chamber is nearly eighty feet in length, and thirty-one feet high. It contains the bust of Lord Nelson, by Sir Francis Chantrey, its pedestal being part of the mast of the Victory shot through by a cannon-ball. There are also busts of the great Duke of Marlborough, from Rysbach, and the Duke of Wellington, by Sir F. Chantrey, with their respective banners over them, by the annual presentation of which, on the anniversaries of the victories of Blenheim and Waterloo, the families of these two of England’s greatest generals hold the estates of Blenheim and Strathsfieldsaye. Also two brass guns captured by Lord Hardinge in India, two taken by Lord Cornwallis at the storming of Seringapatam; and whole-length figures in armour of the Duke of Brunswick, 1530; Lord Howard, 1588; the Earl of Essex, 1596; Henry, Prince of Wales, 1612; Prince Rupert, 1635. There is also a collection of arms of various kinds tastefully arranged on the walls, and the famous shield by Benvenuto Cellini, said to have been presented by Francis I. of France to Henry VIII. on the “Field of the Cloth of Gold.”

The Queen’s Presence Chamber has its walls decorated with Gobelin tapestry, representing a continuation of the events in the life of Queen Esther; and other pictures, namely,—1. A full-length portrait of the Princess Elizabeth of Brunswick, (1649,) and her sister, by Mytens. 2. The Princess Dorothea, by the same master. 3. Henrietta (the wife of Philip, Duke of Orleans, brother of Louis XIV.,) and her two daughters, by Mignard.

The Gold Pantry contains a vast quantity of rare and costly articles, of which the following are but a few:—

The celebrated “Huma,” representing a bird studded with precious stones, and captured from Tippoo Saib at the storming of Seringapatam, supposed to be of the value of upwards of £30,000.

The National Cup, richly embossed with the figures of St. George, St. Patrick, and St. Andrew; the Rose, the Shamrock, and the Thistle, formed of precious stones sumounted by imperial crowns.

"Amongst the numerous shields here deposited is the celebrated shield of Achilles, of exquisite design and workmanship. It is impossible to describe, with anything like accuracy, the beauties of the various salvers, vases, tankards, cups, epergnes, candelabra, etc.; they are all executed by the first artists, and the most refined tastes. We may, however, briefly refer to the celebrated candelabrum of St. George, which may be thus described:—The upper division represents the combat of St. George and the Dragon in full relief. The lower division has also in full relief four figures supporting shields, bearing the arms of England, Ireland, and Scotland, and the Prince of Wales’s plume.

Many of the epergnes are embellished with sculptured subjects from the designs of Flaxnian. There is also a very curious silver cup, made out of Spanish dollars taken at the surrender of Havannah in 1702, and presented to George IV., when Prince of Wales, on his twenty-first birthday, in 1783, by Sir J. Dyer. There are several bulb cups, some splendidly ornamented; others, of ivory, highly coloured with allegorical devices from Flaxman’s designs, richly mounted in gold, and adorned with rare brilliants and other precious stones.’

The Private Apartments, which can only be viewed by an order obtained from the Lord Chamberlain, and then only when the Sovereign is not residing at Windsor, consist of

The buildings occupy about twelve acres of ground.

The Castle is open to visitors on Mondays, Tuesdays, Thursdays, and Fridays.

The Royal Family of England descends from Guelph, younger brother of Odoacer, conqueror and first barbarian King of Italy, who died in the year 489.