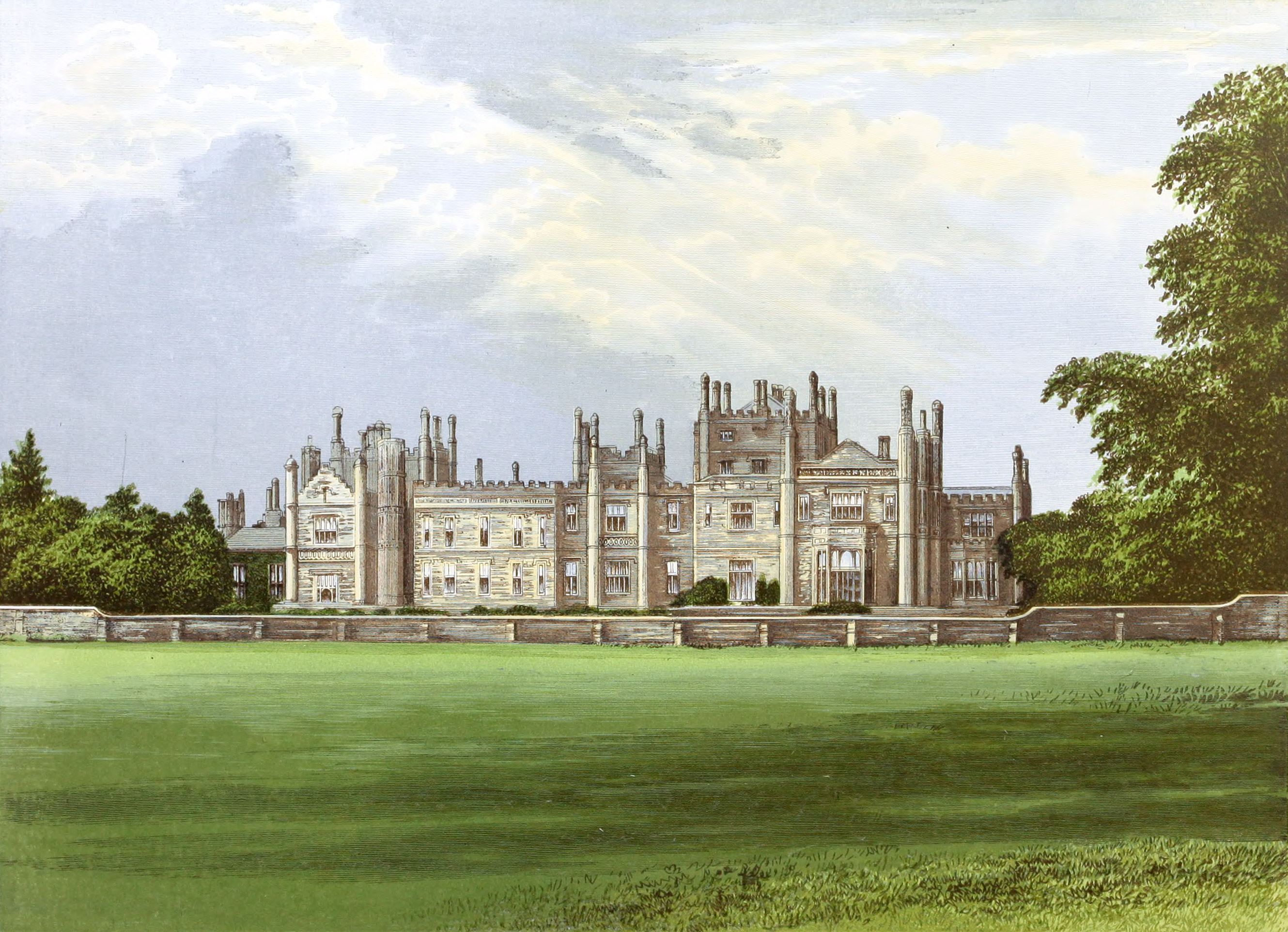 In very old times this most beautiful place was the seat of the family of Tregothnan, a Cornish one, we may be sure, for

They held it till the middle of the fourteenth century, when it was conveyed by Johan, the heiress of John de Tregothnan, the last of this ancient house, to John de Boscawen, ancestor of the present noble owner, himself descended from the family of Boscawen, of Boscawen Rose, a manor and lordship possessed by them in the reign of King John.

The park, which is well stocked with deer, extends over a range of fertile hills, rising rather abruptly from the eastern side of the river Fal, and, as may well be supposed, a series of charming views extends from it in all directions.

The house is a very fine one. The great staircase, which is forty-two feet high, occupies the large central tower. Around it are the drawing-room, fifty-four feet long by twenty-eight feet wide, the breakfast room, dining room, billiard room, and study. The library opens to the drawing-room and the last-named.

—Boscawen of Boscawen-Rose, Cornwall, in the reign of King John, descended John de Boscawen, in 1334, who married, as already stated, Johan, daughter and heiress of John de Tregothnan, of Tregothnan, with whom he acquired the estate, and, dying in 1357, was succeeded by his elder son,

Hugh Boscawen, of Tregothnan, paid a fine of four marks for not attending the coronation of Queen Mary, October 1st., 1553. He married Philippa, daughter and coheiress of Nicholas Carminau, of Carminau, and their third son eventually continued the line, namely,

Nicholas Boscawen, of Tregothnan, who married Alice, daughter and heiress of John Trevanion, Esq., of Trevanion, and dying in 1626, was succeeded by his only son,

Hugh Boscawen, Esq., of Tregothnan, M.P. for the county of Cornwall, married to Margaret, daughter of Robert Rolle, Esq., of Heanton Satchville, Devonshire, and had eleven children, of whom the eldest son,

Nicholas Boscawen, of Tregothnan, a Parliamentarian, died sine prole, and was followed by his next brother,

Hugh Boscawen, Esq., of Tregothnan, who married Margaret, daughter and coheiress of Theophilus Clinton, Earl of Lincoln, and had eight sons, who all died childless, and two daughters, so that the representation of the family thus devolved on the fifth surviving brother,

Edward Boscawen, Esq., of Tregothnan, a Member of the Restoration Parliament. He married Jael, daughter of Sir Francis Godolphin, K.B., and his eldest son was

Hugh Boscawen, Esq., of Tregothnan, Warden of the Stanneries, Comptroller of the Household, and a P.C. in 1714, created, June 9th., 1720, Viscount Falmouth, and Baron of Boscawen-Rose. He married, April 23rd., 1700, Charlotte, elder daughter and coheiress of Charles Godfrey, Esq., and dying October 25th., 1734, their eldest son succeeded,

Hugh Boscawen, second Viscount Falmouth, a General Officer in the Army, and CaptainoftheYeomenoftheGuard. Hemarried,May6th.,1736,HannahCatherine Maria, widow of Richard Russell, Esq., and daughter of Thomas Smith, Esq., of Worplesden, but having no children, was followed, February 4th., 1782, by his nephew,

George Evelyn Boscawen, third Viscount Falmouth, married, in 1784, to Elizabeth Anne, only daughter and heiress of John Crewe, Esq., of Bolesworth Castle, Cheshire, and had, with other issue,

George Henry Boscawen, fifth Viscount and second Earl of Falmouth, High Steward of Wallingford, at whose decease, unmarried, August 29th., 1852, the Earldom became extinct, and the other honours went to his cousin,

Evelyn Boscawen, born March 18th., 1819, married, July 29th., 1845, to Mary Frances Elizabeth Stapleton, in her own right Baroness Le Despencer, the eldest of their children being